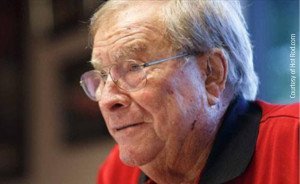 Vic Edelbrock Junior was the son and only child of the Edelbrock company founder Vic Edelbrock. He was a distinguished entrepreneur in the American performance and racing industry and died at eighty years of age reportedly from complications arising from a cold. Born 23 August 1936, he passed away at his home in Rolling Hills, California on Friday, June 9, 2017.

I first met him around the turn of the Millennium when he came to consider the possible purchase of the carburetor manufacturing operation where I was employed. Mired in debt, it was probably the best investment he never made.

During that afternoon, we talked of his racing recreations and how he’d recently competed against Stirling Moss, an experience he related without affection. Apparently, some argy-bargy had occurred on track that had tainted the adventure.

Surprisingly, the name Edelbrock is not so easy for some to get their tongue around. Recently, I overheard a seminar that began with the stern warning: “First and foremost” the speaker bridled, “it is not Ed-le-brock it is Ed-el-brock. Say it correctly before we go further,” he insisted.

Edelbrock Jr. was an American performance parts producer mainly for automobiles and through his creativity led many to recognize him as one of the industry’s statesmen. He was preeminent during the second half of the twentieth century and maintained a strong presence into the first decade of this millennium.

The son of Otis Victor Edelbrock, Sr., Vic Junior inherited the business when aged twenty-six. The operation was known for its engine-building prowess and competition intake manifold designs particularly for racing on California’s dry lake beds. His father died of cancer, aged forty-nine in 1962.

Unlike his father, however, his ambitions were not thwarted by war. And though post WWII brought a skyrocketing business economy and Southern California the perfect location, he had a fierce yearning for something more than just running the business. Better to operate at the indispensable heart than at a minor fringe, albeit specialized. He had inherited enticing prospects and plenty to engage him for he’d been raised on a diet of hot rods and in the art of tuning them. Shaping it so decisively and making a success of it marked his life in our industry.

There’s a memorable story that made the rounds some years ago about Jerry Magnuson speaking to Vic with some pride about his profitable pursuits in the supercharger business. Within a few short weeks the canny and opportunistic Edelbrock was also setting his goals on a similar profit profile. Tellingly, toughness, an uncompromising spirit and an unerring eye for the main chance are leading elements in a successful businessman’s portfolio.

With headquarters in Torrance, California, a foundry 100 miles east in San Jacinto and 50-year tenure as a businessman, it’s reported that at the time Vic took the reins from his father, the company comprised ten employees with annual sales of $450,000. In the following decades, he helped develop the company substantially, bringing it to national prominence among hot-rodders, drag racers and short-track oval racers.

It’s likely Edelbrock owes much of its supremacy to the fact that Vic had the wisdom to hire competent people. Jim McFarland, former editor of Hot Rod magazine, joined the firm in 1969, remaining there for the next 20 years. His initial assignment included the creation of an engineering team with a broader range of skills than just competition intake manifold designs. “We started with camshafts as they were logical companions to the induction systems and within eighteen months the company had become firmly established not only in the aftermarket arena but also a substantial OE supplier.”

McFarland aimed for growth in engine packages–component parts integrated to work together–as well as valve train systems and cylinder heads. “After I left, Vic ventured into crate engines, and he bravely and successfully pioneered emissions-related components.”

In the casting process and in competition intake manifold design, to mention just two, Edelbrock became the definitive authority. During Vic’s time as president, employee levels rose to 700 with revenues exceeding $125 million (2004). Recently, SEMA reported Steve Rogers has been appointed President of Edelbrock, LLC. Rogers, who succeeds Wayne Murray, was the former President and CEO of K&N Engineering (2003-’14).

Vic Edelbrock Jr. is survived by Nancy his wife of 58 years and daughters Camee, Christi, and Carrie Beth (spelling of latter unconfirmed).