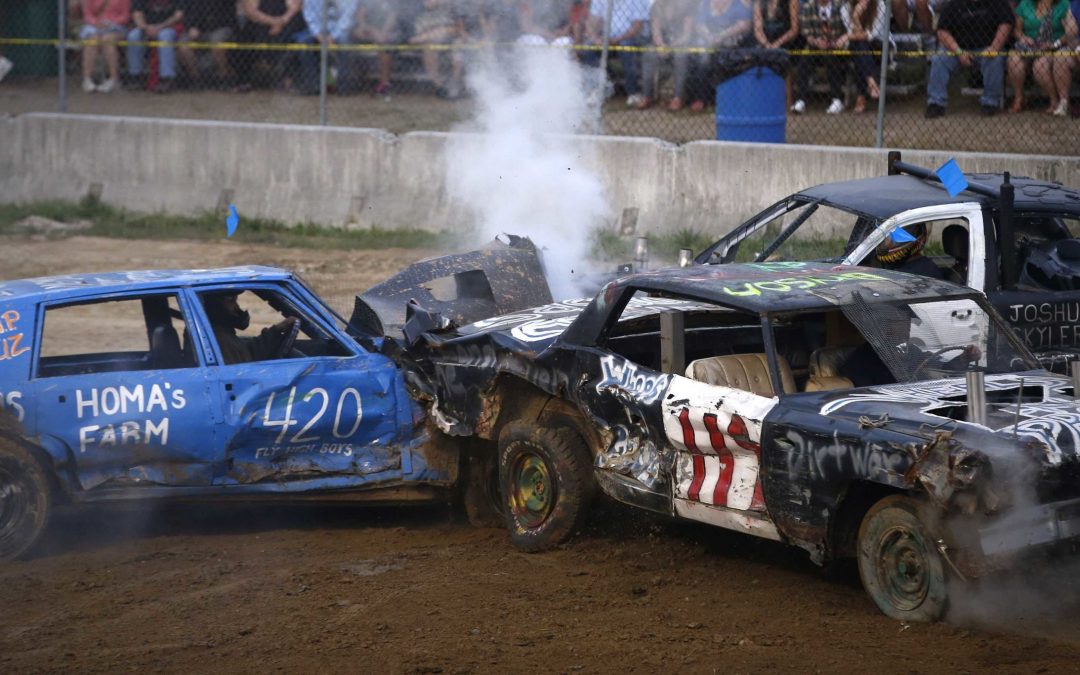 To those unfamiliar with the practice, Demolition Derby events provide handsome purses, especially at large fairs.

At Yolo County in Northern California the promoters advertise a prize of $23,000 and rewards of $10,000 to $20,000 is often the standard at major fairs. Even more lucrative is the Topeka, Kansas, Blizzard Blast, which attracts 1,000 entries and offers $30,000 in prize money. Rewards at smaller county fairs, vary between $2,500 and $5,000, which appeals to a Derby class known as Limited Weld.

But for the more seriously minded—those competing in the Modified and Pro Modified classes—car preparation consumes 120 to 150 hours of mostly reinforcing work. To assume that successful Derby contestants casually select their vehicles from junk yards, sally forth to the next event and conquer is an illusion.

Derby cars perform in an open pit, each one with an objective to be the last vehicle moving, disabling all others in the process. With vehicles built like tanks, some weighing 6,000 to 8,000lbs, it’s no surprise their engines need adequate low-end torque not only to move defiantly but also to generate sufficient bulldozing force to disable the others.

Derby engines, unlike conventional competition power units, are obliged to survive without coolant because cooling systems are inevitably destroyed in the heat of battle–conditions so severe they devastate normal cylinder heads. “First and foremost”, says Indiana engine builder Lance Stillwell, “those engines need durability; they must have resilience to stand a chance of winning.” Stillwell’s Terra Haute operation serves a diverse racing market, including a dozen Derby contestants.

Without increased clearances, cam bearings seize, melt on the camshaft and spin in their bores. Similarly, valve lash is increased as well as clearances between valves and guides, pistons and cylinder walls, and in piston pin bores, and con rod small ends. Even valve seat angles are altered to deflect heat into the head rather than up the valve stem. Because at some point the engine will lose its coolant, oiling squirters are aimed at the underside of pistons crowns to cool them, avoiding premature detonation. They also help lubricate the small ends of the connecting rods. Though equipped with expensive collapsible driveshafts, it is axle damage or cylinder head failure that often cause ultimate defeat.

When attacked by overwhelming force, ensure your defenses are adequate. Engines are encased within 3/4in thick steel fortifications more usually found in military fighting vehicles.

“I’ve seen aluminum heads on Derby engines,” contends Stillwell, “but not often. Although they dissipate heat better than their cast iron counterparts, valve seats that are pressed into aluminum heads usually fall out when the engine overheats. And if a valve begins to bind in its guide, it’s likely to be pushed out of the head. In addition, extreme heat causes aluminum heads to distort beyond repair.”

”I’m unsure of what Derby competitors use in California and other faraway places, but here in the mid-west, the Sportsman II heads are regarded as the most durable–the dominant force as long as I can remember. On Derby engines, they’re superior to any other aftermarket or OEM head we’ve tested. They are resistant to cracking and they can be repaired and pressed back into action again and again. That’s been the underlying tenet since the beginning.”