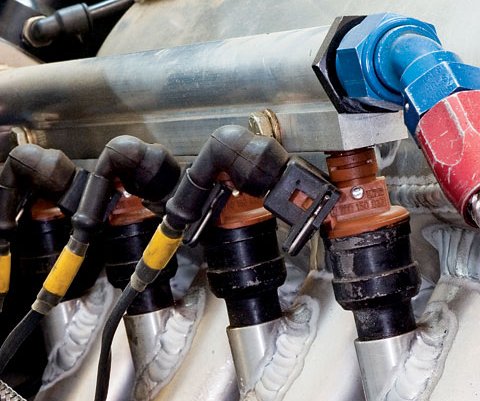 EFI was adopted by the auto industry to comply with stricter emissions controls and fuel economy standards, and today many enthusiasts convert older engines to this modern design.

Learn more about the fuel injector and how it operates, especially if you are planning to install a supercharger, and also recognize the injector requires service, even in naturally aspirated applications.

Many believe that EFI improves an engine’s horsepower, but it does not. Rather it increases freedom for the intake manifold design as only air courses through it and not a mixture of fuel and air.

The length of the runner that connects to the intake port in the cylinder head determines the torque output of the engine and the speed at which it will occur. The longer the runner, the more torque at a lower rpm will the engine produce.

EFI allows the intake manifold runner to curve to achieve the desired length (resonant tuning) since there is no fuel present to drop out of suspension.

The core component of the EFI system is the fuel injector.

The injector is an electromagnet that controls a pintle that opens and closes against a seat. The engine controller (ECU) supplies 12 volts at all times when the ignition is on, and the injector is controlled by switching the ground circuit on and off.

The time in milliseconds (1/1,000) the ground is evoked, and the injector spraying fuel is called the pulse width.

The period it takes for the magnetics to build and the pintle to achieve full travel is called the rise time. As the fuel injector ages due to countless cycles and heat exposures, the magnetics will become lazy. When this happens, the engine will run, but the fuel delivery will be impacted. It is usually first seen in degraded idle quality or a change in how the engine starts.

With today’s injectors, lazy magnetics traditionally will not be a problem until many years of use are seen.

When the fuel enters the injector body, it passes through an integral fine mesh screen to catch anything that gets past the fuel filter. The screen can be changed with a special tool, though it is not considered a routine service item. Instead, it is only renewed when the unit is serviced at an injector shop during ultrasonic cleaning.

Rubber O-rings seal the injector to the fuel rail and also to the intake manifold. It is typical for the O-ring at the intake port to become dried out and begin to leak on an older engine. This will not be a fuel leak but a manifold vacuum leak that will impact only that one cylinder.

The O-rings are serviceable and are offered at most auto parts stores. Lubricate both O-rings with either white grease or petroleum jelly before installing them into the fuel rail and intake manifold.

The most common issue with EFI is the degradation of the spray pattern due to deposits that form on the pintle. These deposits are carbon-based and are a function of the chemical components in the gasoline along with the high thermal loading the injector sees.

When the deposits form the spray pattern, the atomization of the fuel suffers, as does the way the engine runs.

In addition, if the deposits are allowed to accumulate, they tend to pit the pintle and seat, permanently ruining them.

A deposit-laden injector will need to have the pintle move farther off the seat before it can atomize the fuel. During that time, the gasoline will be in a liquid stream instead of the desired atomized pattern.

Liquid fuel does not burn effectively and will result in a poorly running engine with many possible symptoms.

An ancillary concern is the accumulation of carbon deposits on the intake valve.

It is standard protocol to place the fuel injector between 70 to 100 mm from the intake valve.

It is orientated to allow the atomized spray to fan out and enter the intake port of the cylinder head with minimal wall wetting while colliding with the stem of the valve. This is to help break the fuel apart due to the injector’s close proximity to the combustion chamber.

Even if the injector spray pattern is normal, carbon will act as a sponge and wick in the fuel if the intake valve has deposits.

The best way to care for injectors is to keep deposits from forming. Establish a routine to treat the gasoline with a detergent.

Make sure whatever brand you use also removes intake valve deposits. A product that is just an injector cleaner flashes off at the pintle and does not work on valve deposits.

Depending on the use of the engine, a few times per year with treated fuel is required. I cannot emphasize enough how important keeping the injectors clean in any EFI system, not just your performance car.

If the injectors do not clean up with a few tanks of treated fuel, then they can be removed and sent to a service shop.

First, a dedicated test bench is used to determine the fuel flow at various pulse widths. Then, the screen and pintle cap are changed, and the injector is ultrasonically cleaned.

If the magnetics are good and there is no physical damage, this service will make the injectors like new. The cost is generally around $40/injector versus two to four times that amount for a new one.

As complex as the EFI system is, the key to longevity with excellent engine performance and fuel economy comes down to one thing: keep the pintle clean, and the injector will take care of the rest! It is that simple.