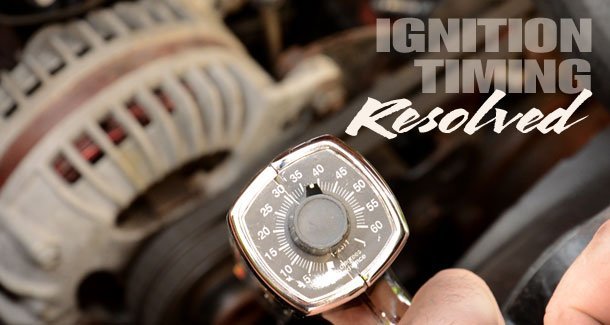 Highly tuned engines, those with high-performance camshafts, cylinder heads, and intake manifolds often exhibit a lazy response or, worse, hesitate under acceleration or die at idle.

Interestingly, these perennial troubles are invariably resolved by increasing the initial or static ignition timing. This is achieved simply by loosening the distributor clamp and slightly rotating the distributor body. Consequently, either the points or an electronic pickup will be triggered earlier. This sends the current directly to the coil or to an electronic ignition box. The high voltage current then returns to the center of the distributor cap, making direct contact with the rotor. As the rotor spins the current jumps across the tiny gap to each of the small metal tabs, completing the electrical circuit and sending short–duration, high voltage currents to each spark plug on time.

However, to increase the static timing also increases the engine’s progressive timing; that is, its total timing which is impelled by mechanical advance mechanisms or vacuum advance or both.

Let’s say the engine operates at its optimum when its initial or static timing is advanced to fire at 18 degrees before the piston reaches Top Dead Center. Let’s further assume the distributor’s progressive advancing mechanism will deliver an additional 24 degrees, resulting in total ignition timing of 42 degrees—which is excessive for most hot rod engines. Generally high-performance small-block and big-block engines excel with around 18 degrees of initial or static ignition advance plus a further 18 degrees of progressive ignition advance, resulting in total timing of around 36 degrees.

This means the spark plug in each cylinder is firing at 36 degrees before the piston reaches Top Dead Center. Firing before TDC is necessary because of the time it takes for the flame front to ignite the air-fuel mixture in the cylinder. Using a dial-back-style timing light, you adjust the dial until the line on the crankshaft balancer aligns with the TDC mark on the tab. Thus, at idle the number on the dial would represent your initial timing. Total timing is determined similarly, except the engine speed is increased, usually to 2,500-3,000rpm at which speed the distributor weights and springs will have moved to their maximum advance position.

The advantage of the dial-back-style timing light becomes clear when determining total timing. In this example total timing is recorded at 38 degrees before TDC. With the standard non-dial-back timing light, 38 degrees will be a far distance from the tab and requires some form of measuring.