Ford of 1910: changes to make you ponder 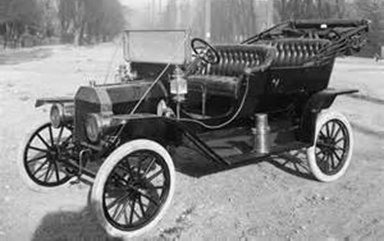 For this Ford of 1910 only 144 miles of paved roads existed in this country. In fact, only 8,000 cars existed in the entire nation, the maximum speed limit in most cities was 10mph and fuel was available from drug stores only. More importantly life expectancy for men was 47 years.

In 1910 more than 95 percent of all births took place at home. Ninety percent of all doctors had no college education! Instead, they attended so-called medical schools, many of which were condemned by both press and government as ‘substandard.’

In 1910 eggs cost fourteen cents a dozen and sugar and coffee four and fifteen cents a pound respectively. Most women washed their hair only once a month, and used Borax or egg yolks for shampoo. There was no such thing as under-arm deodorant or tooth paste. Canada, warm-heartedly, passed a law that prohibited poor people from entering their country for any reason.

In 1910 the five leading causes of death were:
1. Pneumonia and influenza
2. Tuberculosis
3. Diarrhea
4. Heart disease
5. Stroke

In 1910 crossword puzzles, canned beer, and iced tea hadn’t yet been invented—neither had Mother’s Day nor Father’s Day. Two of10 adults could neither read nor write and only 6 percent of all Americans graduated from high school. Eighteen percent of households had at least one full-time servant or domestic help.

The American flag displayed 45 stars, the population of Las Vegas, Nevada was 30 and the total of reported murders throughout the nation numbered 230.