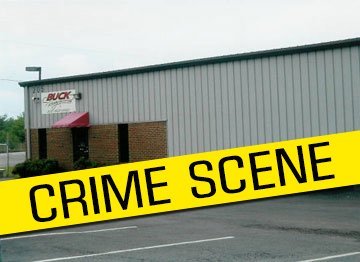 When Robin Buck, wife of noted engine builder Charlie Buck, recently posted “Can anyone identify these men” on her Face Book page accompanied by photographs of two Caucasian males, she succeeded in recruiting 589,000 individuals in short order. Some responded immediately telling of resemblances to persons seen on the television series Street Outlaws while others cast about assembling a reward in an attempt to catch the criminals. Engine builder Reher Morrison’s recent contribution brought the total to $20, 110.

Around 10:30 on the night of Thursday, June 18, 2015, thieves broke into Buck Racing Engines of King, North Carolina and stole eight engines valued at just under $500,000. Earlier that afternoon two unknown men had visited the shop inquiring about a short-block for sale. Their photographs had been captured while in Buck’s office area.

Although the intruders occupied the building for five and a half hours, they operated in darkness in the attic for the first two hours with flashlights. Crawling along the floor in military style they inspected the wiring to the alarm and phone systems.

Once the two systems were immobilized the intruders either sprayed the lenses of the video cameras with paint or destroyed them. Nonetheless, further concealed cameras continued to monitor their movements as they set about selecting their illicit prizes.

Although two of the engines stolen were built for high-performance street cars the thieves focused chiefly on the nitrous-assisted engines, the most expensive of which was valued at $100,000.

Interestingly, a supercharged engine remained under their scrutiny for an hour and a half, but ultimately they replaced its covers, deciding against it. Paradoxically, it was worth more than any of the other engines taken.

Despite the forklift truck being rendered immobile—the keys having been removed earlier—the thieves loaded eight engines into their trailer in a mere fourteen minutes.

For videos and the latest updates visit Buck’s Facebook page.

A four and a half hour drive away, Eagle Racing Engines of Knoxville, Tennessee was also raided, losing components valued between $30,000 and $40,000 just the night before.

“The intruders gained entry by thinking they had disabled the alarm and breaking the door down,” said owner Mike Hedgecock, “but they cut the wire to the wrong building.” As the alarm, which has cellular back-up, rang out the thieves quickly fled but not before helping themselves to cylinder heads, carburetors, manifolds, and camshafts—mainly for big-block Chevrolets.

“Their is no doubt the smaller-framed boy with black hair [depicted on one of Buck’s security cameras] was waited on by my grandson earlier on Wednesday,” disclosed Mr. Hedgecock. “And there is no doubt the truck was similar – a nice late-model, black 3500 dually.”

The respective County Sheriff’s departments have several important leads and are making progress but no arrests have been made as of Thursday, July 9, 2015

Although the power of the Internet in this instance motivated thousands to do good, it can also be a hugely destructive force. Imagine the injustice done to individuals that could be innocent. If innocent, defamation of character, reputations ruined, lives threatened are afflictions hard to expunge.