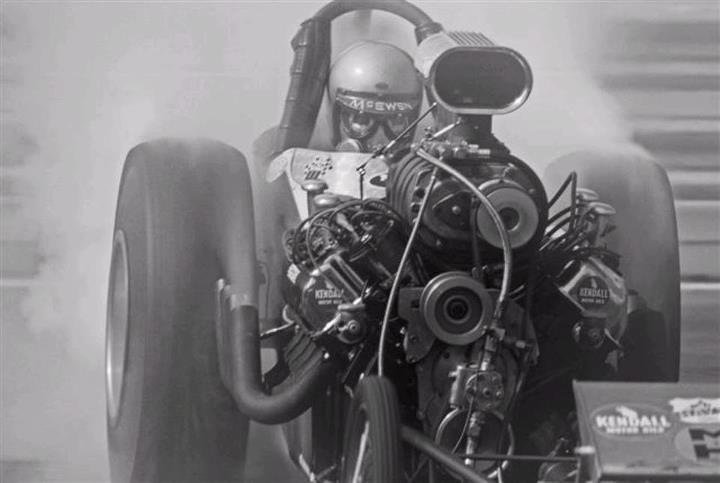 During early July 2015, the Snake & Mongoose movie began airing on the Starz television channel. The film, first released in September 2013, recorded the events leading up to “Mongoose’s” famous victory over “Snake” Prudomme during the 1978 NHRA Funny Car US Nationals and depicted the lives and times of the two drag racing rivals as well as revealing several ground-breaking achievements of the time.

According to Tom McEwen, universally known as the Mongoose, safety equipment began in California in the late nineteen-fifties with Bill Simpson in his single garage with one sewing machine. He was just starting out and his priority was to create a parachute to retard drag racing cars beyond the quarter-mile. He also energetically pursued the development of race suits and other apparel to protect the racer against burns. One often wonders about the depiction of Simpson’s own life on film. His achievements certainly would assure his position as a great contributor to the world of racing; it could also be a shocking and brilliantly amusing account of a life that only Bill Simpson could have lived. In engine development, conventions changed rapidly much like today. McEwen recalls an engineering friend of Chrisman & Cannon, the famed Hustler drag racers, informing them they were not taking advantage of the thrust issued from the headers. The engineer, then employed at Rocketdyne to study World War II German V-2 missiles, estimated they might be squandering around 50lbs of thrust per pipe. To gain downforce on the rear tires as well as some forward momentum, try curling them upward and angling them backward, he suggested, terminating them just in front of the rear tires. “A brilliant innovation,” declared Tom later, “except for one small consideration: the exhaust fumes from the front-engine dragster now entered the driver’s compartment and you couldn’t breathe!”
He resolved the problem, however, by visiting a local paint store and buying a painter’s respirator, “One with those screw-on breathers that you use when painting a house” he said. “Then I took it over to Bill Simpson who sewed it into a fire-retardant face mask. After that everybody had them!”

Standard battle dress of the nineteen sixties and seventies featured P-51 pilot’s goggles, which used glass lenses to ensure they wouldn’t melt if exposed to fire, and the McEwen-inspired face mask. The mask, which Bill Simpson continually developed, remained the standard for decades replaced only with the advent of the full face helmet.