Dave Hamer, who helped develop the highly successful hydraulic system now in widespread use on Formula One cars, was one of dozens of racing personalities attracted to this year’s Goodwood Revival.

In 2009 Hamer, a senior R&D engineer at the Renault F1 team, formerly Benetton and later rebadged Lotus F1, developed a hydraulic system called Pro Pitch System (PPS) that strived to maintain constant ride height. As a consequence it brought much benefit to the car’s aero systems. The system came about when head of R&D, Robin Tuluie, handed Hamer several hydraulic rams to replace the center springs on the seven-post rig car and said, “Have a play with these.” Though the units were too small, they awakened an enticing proposition.

As most racing followers know, ride height particularly front ride height plays a critical part of any successful F1 car. They all require a stiff, stable platform and as the car travels faster, the closer it moves toward ground level. Powerful aerodynamic energy pushes down on the car and transmits the forces through the tires.

“Since the banning of active suspension in 1993, explains Hamer, “we had strived to control the car’s ride height without conceding mechanical grip. So for the 1994 season, we tried using some of the car’s damping forces to pump the suspension up, similar to the technology used in Boge dampers. At that time Boge supplied dampers to BMW for use on their touring motorcycles. Their chief objective was to achieve consistent ride height regardless of whether the bike was carrying a passenger or luggage.

“Later we fitted a 10kg tuned mass damper in the nose of the car. This was quickly copied by all the other teams, before being banned. Nonetheless, the tuned damper gave us a decisive advantage, helping us win that year’s F1 Championship with Fernando Alonso.”

Before the introduction of the PPS, front ride heights had been set higher than desirable. But the problem was resolved by placing a hydraulic cylinder at the rear of the car. As the car squats it transfers fluid from the rear suspension to the front, which causes the front suspension to extend and compensate for tire squish. As a result the front ride height remains constant.

“Although Fernando Alonso tested it before the 2009 season started and declared he liked it,” says Hamer, “it couldn’t be modeled easily and therefore wasn’t used until later in the year, at Nurburgring in fact. Then Bob Bell, our Technical Director at the time, knowing I’d been testing it on a 7-post rig for a year, took the initiative and had it installed.”

Predictably, its admirable qualities were quickly realized. But in 2010, the Renault F1 team lost their star driver, Alonso, to Ferrari and the Italian team acquired the new system as did virtually every other team in the paddock!

A similar system was used in the mid-1960s by Dr. Alex Moulton, who pioneered Hydrolastic suspension for the Mini and other small BMC cars. He, too, had been seeking a system that would remain level and resist pitch. “So we really didn’t invent it we just borrowed it for a different application. What surprised me, though, was by juggling with it in *heave and pitch stiffness, we succeeded in recovering the entire mechanical grip we’d lost in the stiffening process. So I suppose we got something for nothing.”

His story on creating a tuned mass damper click here. 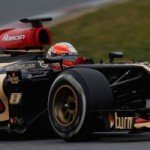