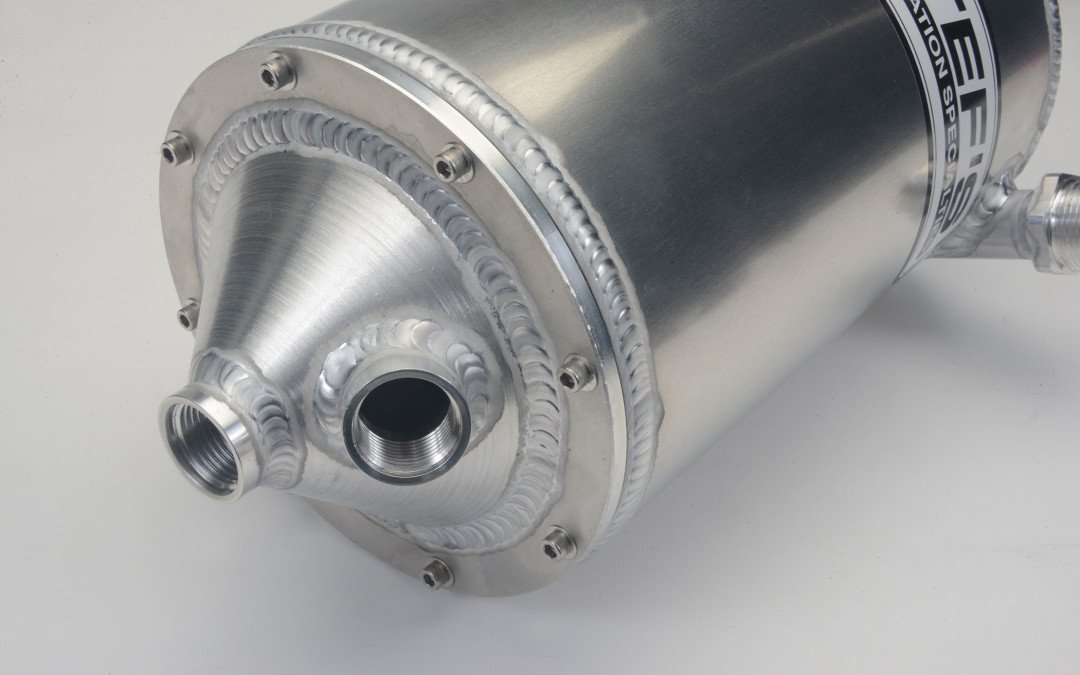 Years ago when drag racing oil pan designs were in their infancy, engines would blow-up from damage introduced during the burn-out stage. Under full acceleration on the track they operated as intended. But when the high-revving engine moved the race car slowly across the burn-out area and without high G-force sending the oil to the rear of the pan, the engine bearings were often starved of oil. Baffles and other paraphernalia eventually remedied the difficulty.

As the evolution continues we bring you news of the latest developments in competition oil tanks from Stef’s. Lakewood, NJ: Stef’s, the oil pan and oiling systems specialists, has released details of striking, new two-piece competition oil tanks with collective qualities that may be unique. These include a removable and clock-able base and a flush-mounted integrated ventilation system. They are designed for most drag racing, oval track and road racing applications.

The chief advantage of the removable base is that it offers easy inspection and cleaning of the internals, a useful feature not present in Stef’s previous oil tanks.

The chief advantage of the removable base is that it offers easy inspection and cleaning of the internals, a useful feature not present in Stef’s previous oil tanks. In addition, the conical base features an acceleration baffle that deters oil from running up the tank side. Beyond this the base can be clocked in increments of 45 degrees, which proves useful in most situations. The 8-bolt base is attached to the lower flange of the oil tank body by 10-32tpi stainless steel socket head cap screws. A large diameter O-ring is sandwiched between both bodies to complete the seal.

Unlike previous Stef’s models on which the vent chamber clamped to the tank, this new flush-mounted breather overcomes any potential hood-clearance difficulties

Importantly, two threaded female ports, 1-1/16in by 12tpi, are also located in the conical base. One is positioned on bottom dead center and accepts a 4in tall 195 watt submersible heater probe and seals with an O-ring. As optimum operating oil temperature is 220 to 250 degrees Fahrenheit, it is considered good practice to heat the oil before starting the motor. The remaining port, the angled outlet port, directs oil to the pressure inlet port of the pump. The vent chamber, which is fed by a 1.5in OD tube, is also of new design. Unlike previous Stef’s models on which the vent chamber clamped to the tank, this new flush-mounted breather overcomes any potential hood-clearance difficulties. It also increases overall breather volume. A brass drain bung is located at the bottom of the breather chamber, which allows the convenience of draining any oil residue without tank removal.

Stef’s new tanks, which feature a vertical, cylindrical internal baffle that de-aerates the returning oil and a practical, large diameter screw-on cap that seals by an O-ring, are supplied complete with heater, mounting brackets and all necessary fittings. Tank capacities are available as follows: 1, 1.5, 2, 3, 4 or 5 gallons.