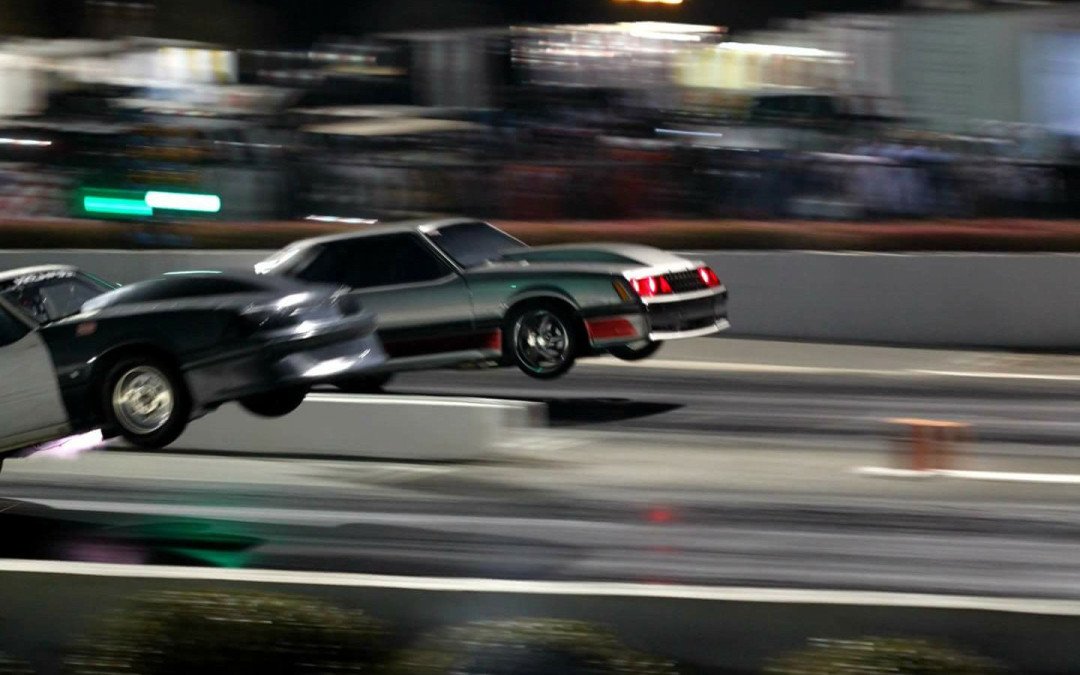 Grudge racing has dominated the drag racing scene in the southern US States for decades.

But in recent years, the Internet has conquered every part of its frenetic life, particularly Facebook postings that have expanded its Southern origins (Georgia, Florida, and the Carolinas) westward to the Mississippi and north to the shores of Lake Michigan.

To its masses, its chief dynamic is straight forward: betting. There is no maximum amount—when a dollar changes hands it’s a Grudge race. 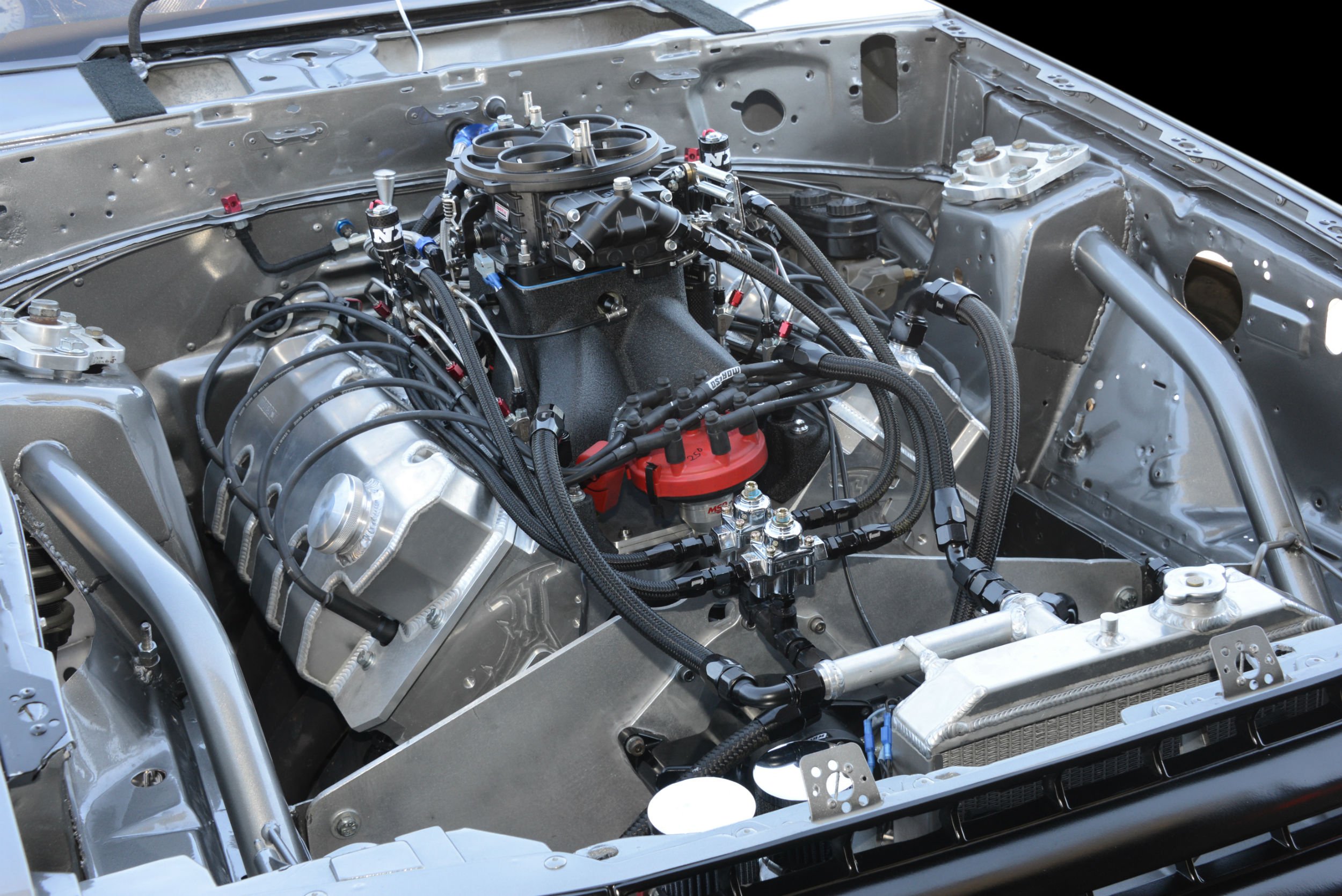 In Grudge racing, this small-block Ford is energized by HPE Hemi heads; it has already distinguished itself by defeating turbo rivals, a rare occurrence in the nitrous oxide-dominated Grudge game.

An addictive quality, the money won and lost, sometimes in sizable proportions, is only surpassed by pride or poor judgment of its car owners, entrants, drivers, and spectators: such an adventure, such potential for gain, such drama. Still, in the rapid passing of a one-eighth mile, the prospects of returning home $10,000 poorer are agonizing! 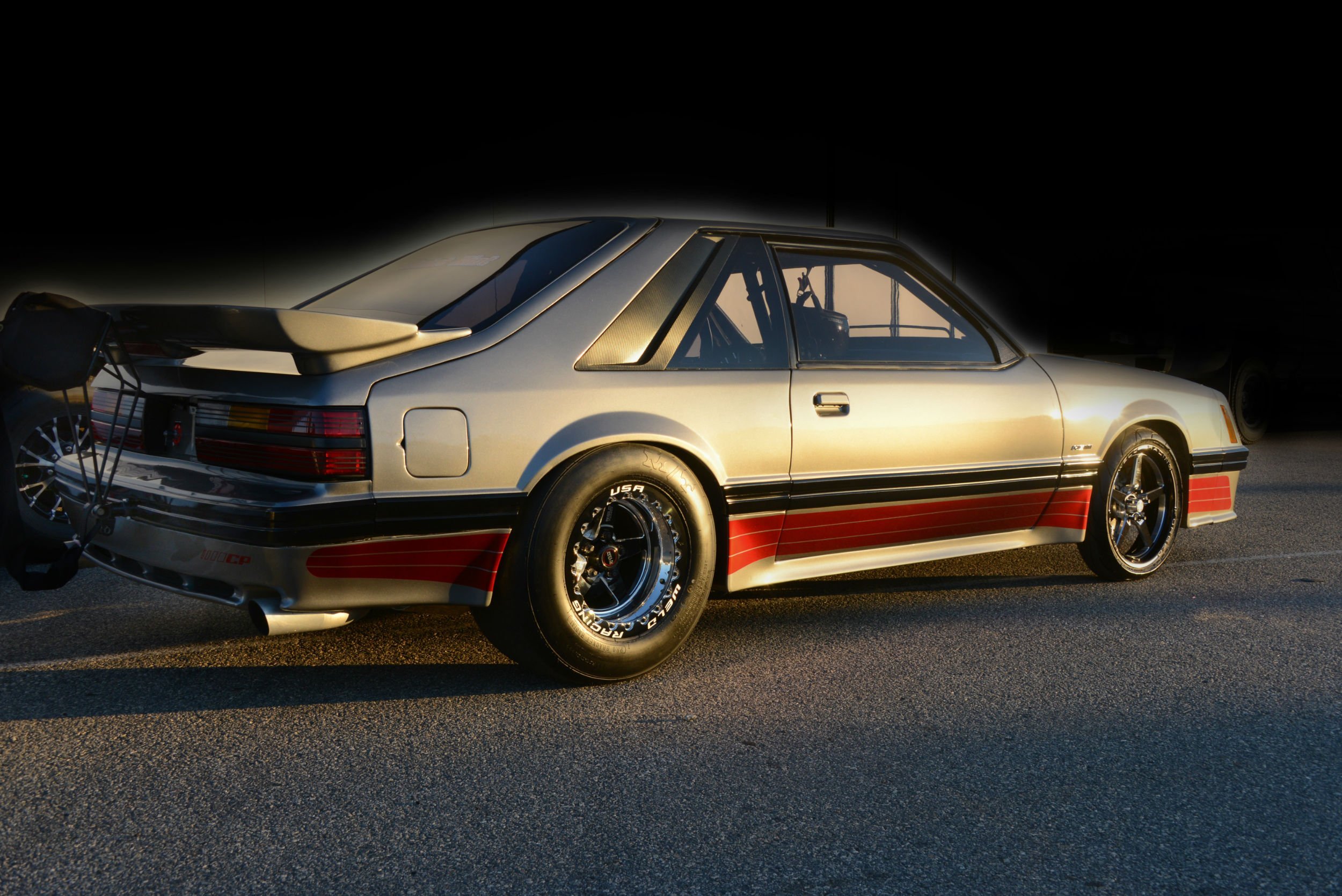 In the South, Fox-body Mustang successes outstretch all others.

In their pre-race negotiations, a Grudge racer attempts to learn as much as possible about his rival, his racing history, and the competitiveness of his car. They operate with “stips”, an abbreviation for stipulations that specify what is allowed: small block-powered car on 28/10.5 tires with a cast intake manifold and a single 4bl or dual 4bl carburetors.  If your opponent has a history of swapping engines, the stips might have a clause that allows his rival to view the engine before the race. 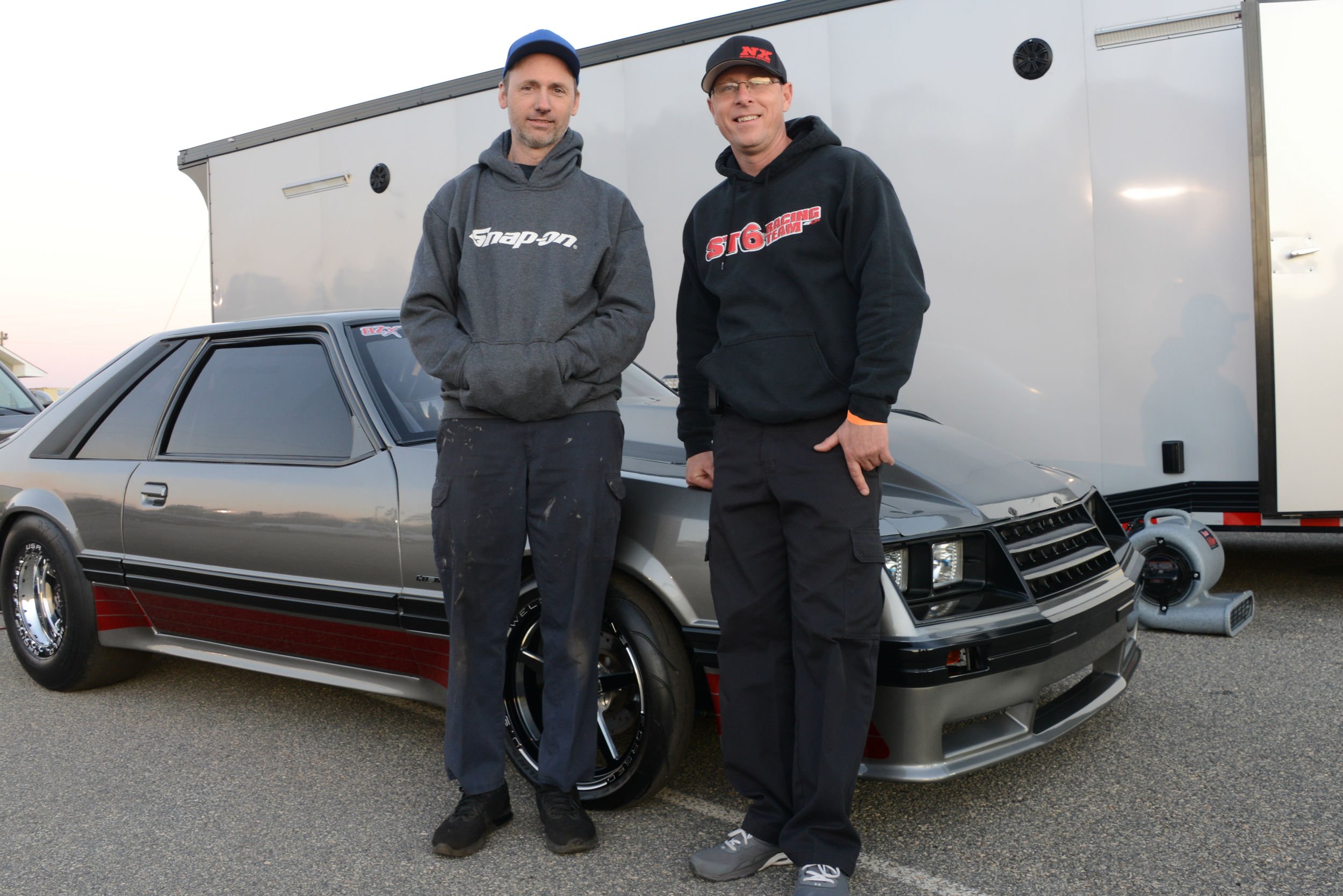 Leading constructor, tuner, and racer Scott Milner (left) and accomplished competitor Jonathan May with a Mustang whose ownership has alternated between them for years

When all is settled, perhaps a week in advance of the race, the deposits of the two opponents are sent to a third party, a neutral person known as the “DP” man—a further abbreviation for Deposit man. The deposit acts as a contract between two people who have agreed to race. At the track, before the race, the full wager is handed over to the Deposit man, who is entrusted with the monies and the responsibility of enforcing the stipulations and the dispensing of all the money to the winner. 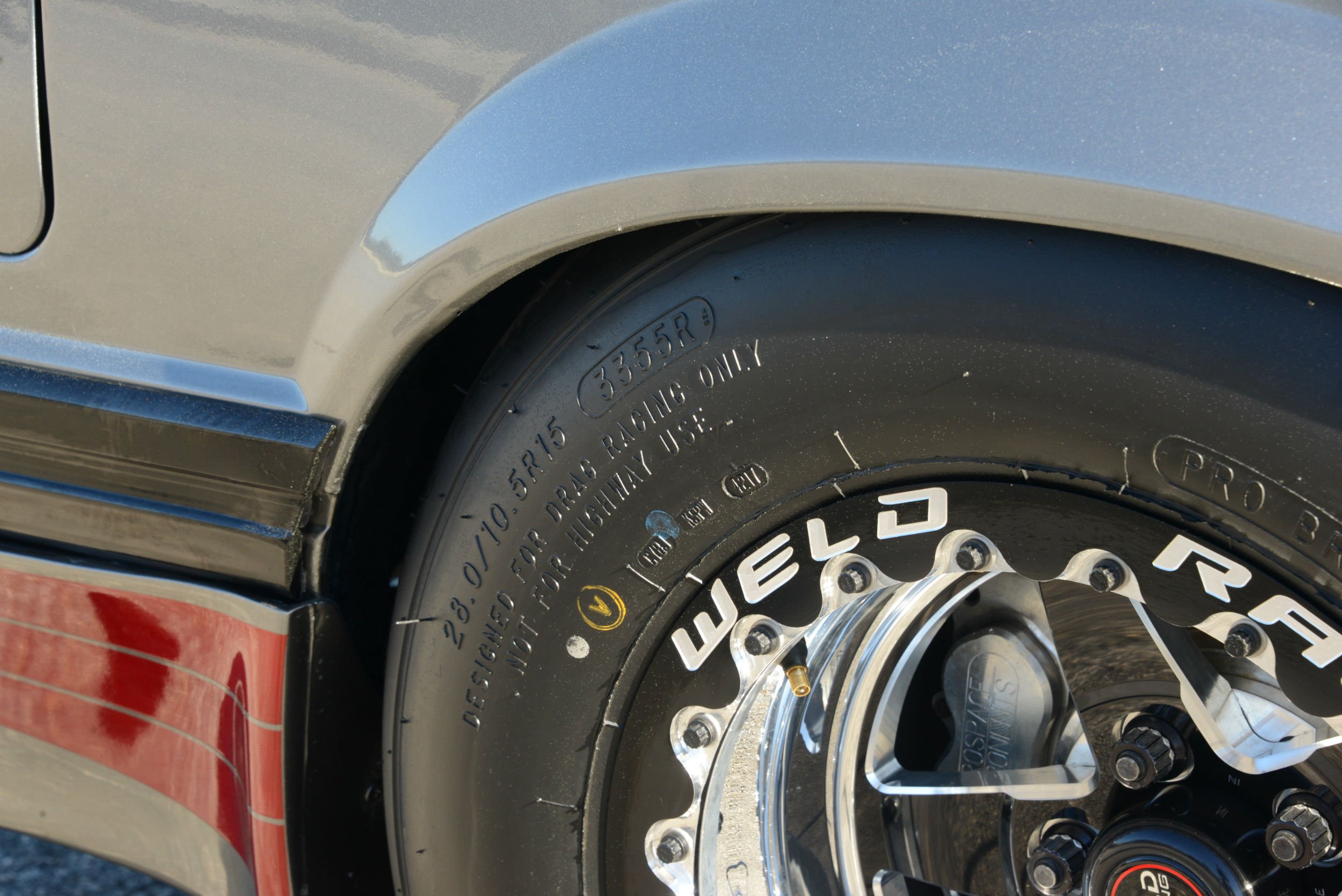 No-Time Shoot-out rules demand the use of a small-block engine, nitrous oxide-assisted, 28.0/10.5 R15 Drag Radials, which, indeed, most Grudge racing cars run, and often stipulates a wheelbase dimension within 2in of the original.

Grudge race cars are mostly nitrous oxide-assisted; they also compete in Shoot-out events. These are organized by a promoter who guarantees to pay a sum of money to the racers, if sufficient cars are entered for the event. A typical arrangement might pay the first four places: $3,000 to the winner, $1,000 to the runner-up, and $500 each to third- and fourth-place finishers. 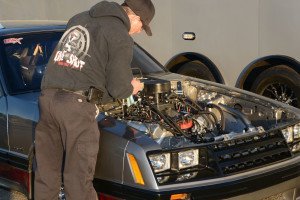 Though Grudge racing has no formal tech inspection, the racer’s routine checks include fuel and nitrous levels, and spark plugs, which are usually replaced after each round of racing. Before discarding the plugs, they perform a color check on each, and adjustments are made to the ignition or nitrous oxide systems, if necessary.

Alternatively, they draw chips, like poker chips that specify a number and a letter L or R, which signifies the left or right lane. The two racers that draw number 1 are paired for the first round and similarly with number 2 and 3 and so forth.

These pairings introduce further potential for monetary gain, which might vary from $500 to $2,500. So during the drivers’ meeting, racers will ask the promoter if he has any objection to their placing Grudge race bets with their first-round opponents. Usually there are no objections. 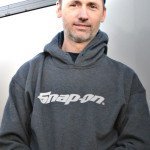 Scott Milner owns and operates Coupe Performance in Covington, nr. Atlanta. The company constructs 15 to 20 complete racecars each year and services a further 60 to 70 for competition each racing season.

Both Grudge racing and Shoot-outs operate as No-Time events, the objective is to shroud in mystery as much racecar detail as possible. Obviously, should a potentially lucrative match arise, it’s in the racer’s interest that many of his performance details remain unknown.

Atlanta racecar preparation specialist, Scott Milner says, “You’d be forgiven for thinking Grudge racing attracts questionable individuals but often it’s the opposite, for their racing world is more organized than you’d expect. “ More important, their word is their bond. “If you don’t pay your bet,” he explains, “you’re finished. Word gets around and no one will race you. A stain on your name means your Grudge racing days are over. Most people do what they say they’ll do.” 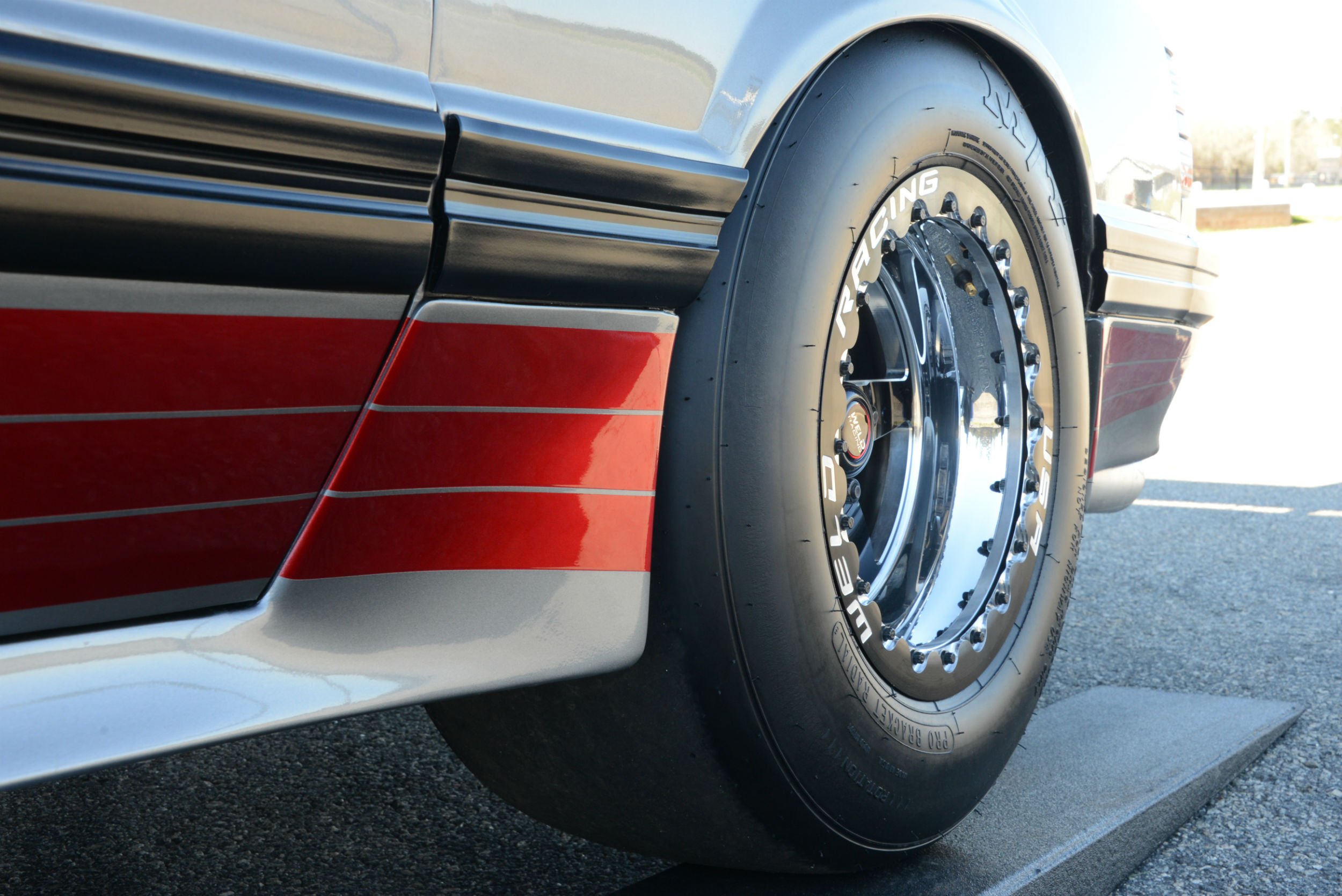 To achieve optimum contact patch, the 10.5in Drag Radial rear slick is fitted to a 12in wide rim. In diameter the tire measures approximately 28in. The front tire on Jonathan May’s machine is a 150/60 ZR17, which originates from a motorcycle rear.

The racecar most lured to the starting line, at least in the State of Georgia, is the Fox-body Mustang. Produced from 1979 to 1993, the abundance of these vehicles and their conversion to racecars has spurred an industry endowed with dyno cells, chassis tuning departments, and spray painting booths that remain busy throughout the year. 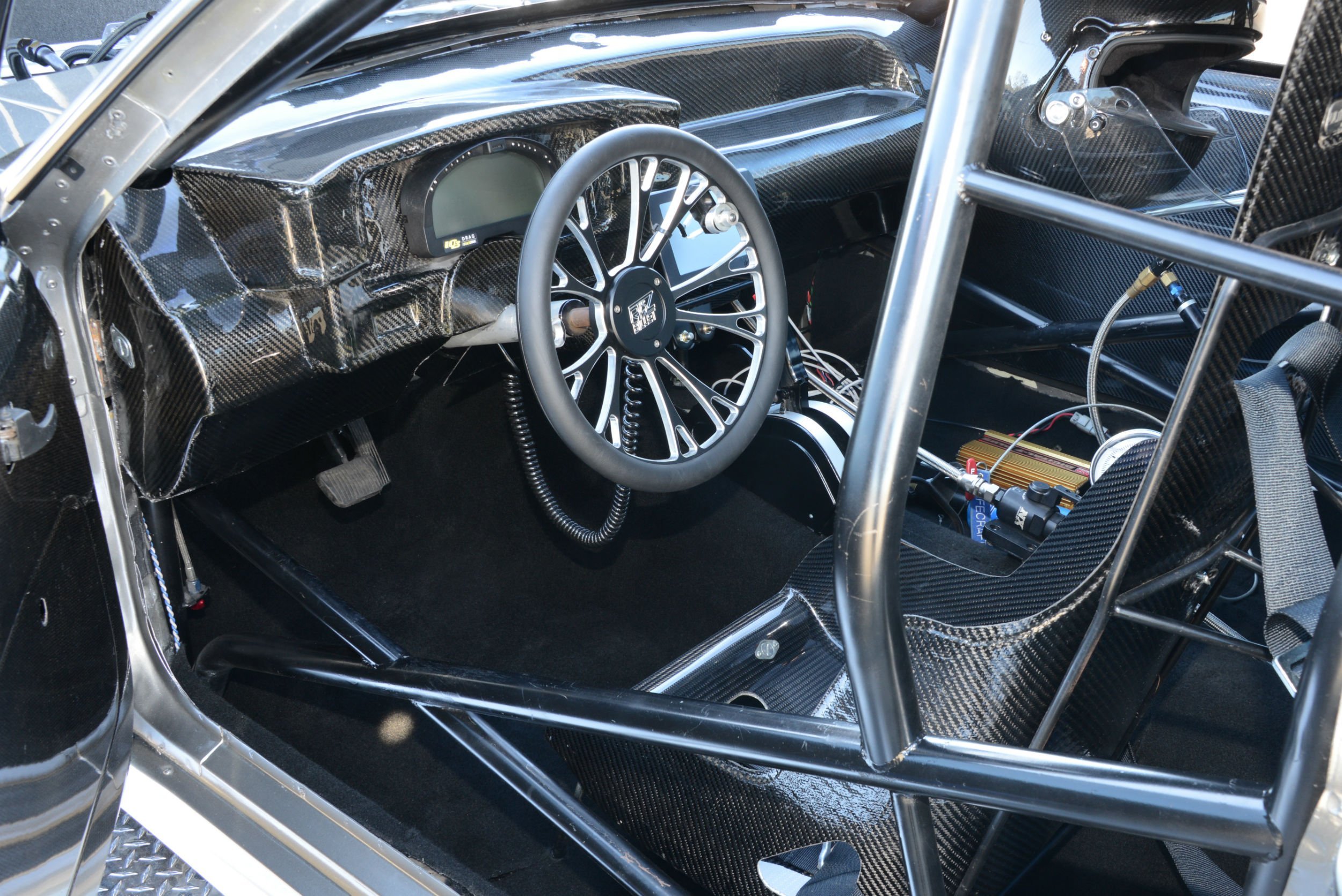 Cockpit enclosed by chrome molybdenum roll cage 1.625in x 0.083in wall thickness and carbon fiber seat reinforced by 1/2in tubular frame. Racepak instrument nestles in quick release carbon fiber dash board. Partially obscured to the right of the steering wheel is a touch screen switch panel.

Supremacy, unsurprisingly, is the objective but trumpeting your success can be detrimental to your racing prospects. Nonetheless, Internet bench racers can adeptly calculate an eighty percent win ratio when they see it. 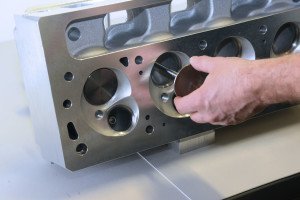 Generating optimum power from Hemi heads with nitrous oxide and can be elusive. But HPE’s small-block Ford Hemi design succeeds with a combustion chamber of a different formula—its innovation merges the best of the Hemi with the Wedge 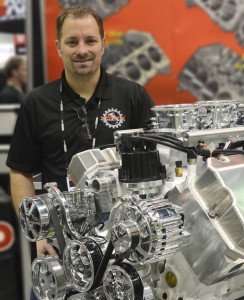 Greg Brown of HPE introduced his Hemi cylinder heads for small-block Fords at the PRI show in December 2016. A year later at the same event, his Hemi for the LS debuted. What’s it been like in the intervening months? “It’s been like living at Cape Canaveral at launch time!”

A visit to Coupe Performance facilities at Covington, Georgia—one of the most successful preparation shops in the country—would reveal around 50 racecars, all with their hoods shut to the visitor’s prying eye.

Founded by Scott Milner in 2001, he acknowledges the Fox-body has an OEM rear suspension that resembles a competition 4-link system. Therefore, it’s eminently suited to competition. The car is also relatively light with a plentiful supply of racing components available.

Milner’s company builds an astonishing 15 to 20 cars from scratch each year and, in addition, services 60 to 70 others. 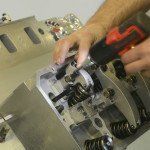 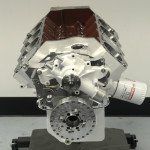