Snake Prudomme and Mongoose McEwen, the two former, prominent drag racers around whom the Snake and Mongoose movie was based, are scheduled to appear at this year’s PRI Grand Opening Breakfast. The event takes place on Thursday, December 11, at 8am in the Sagamore Ballroom in the Indiana Convention Center, Indianapolis. If you missed them at the SEMA Breakfast held two years ago, which attracted an early morning audience of 1800, you might like to catch them at the PRI show. Doors open at 7am.

Joining MAVTV’s Dave Despain they’ll share their colorful racing stories, kicking off what PRI cites as the world’s largest gathering of motorsports professionals. With 49 career victories, Prudhomme remains the sixth most successful competitor in NHRA history. Beginning his driving career in 1962, he was the first driver to win the NHRA series title on four consecutive occasions. McEwen is listed as number 16 of the 50 most significant drivers of NHRA’s first 50 years, winning five NHRA national events.

But these statistics hardly tell the entire story for McEwen went on to win three AHRA world titles competing against the same NHRA competitors. He also missed a significant number of ‘association’ events while chasing the lucre of match racing. Match racing paid the bills and in this arena he excelled, winning the 1973 Super Nationals in a Funny Car at Ontario, California, claiming a purse of $20,000 and the PDA event in Tulsa, Oklahoma which paid $35,000. But carrying victory in the last race at the famed Lions track in Los Angeles in 1972 was probably his most enthralling.

Tom McEwen started racing in 1953, and adopted the nickname “the Mongoose” in 1964 from engine builder Ed Donovan as a way to promote Funny Car match races against Prudhomme, nicknamed Snake. McEwen’s promotional abilities dazzled the drag racing community when he announced his1969 deal with Mattel’s Hot Wheels toy line that became one of the biggest, most successful national promotions in racing history.

Influences at the roots of drag racing

By nature the racing industry is a prolific pioneer—how could it be anything other? Success breeds success. Coincidentally, McEwen’s pioneering record is one of considerable contribution. In his early days he worked with Bill Simpson creating the first face mask for drag racing. Equipped with breathers that allowed the racer to inhale without directly drawing in harmful exhaust fumes from the Zoomie headers on front-engine dragsters, it was constructed from fire-resistant Nomex.

Later, as he expanded his drag racing horizons, he collaborated with Simpson in the development of the first drag racing parachutes. Also his contributions were crucial in the testing of fire suits and gloves and boots as well as helmets. Mongoose was also instrumental in introducing on-board fire extinguishers to drag racing.

When the rear end of his Corvette suffered weightlessness at high speed, he added side dams, long end plates, to the Funny Car’s rear spoiler. The objective was to increase rear downforce by damming the air more effectively, thus impeding its progress in spilling off the rear bodywork.

More significantly, perhaps, Mongoose distinguished himself when he helped Goodyear develop their early racing slicks. “As in any form of motor sport, tires have always been the key factor,” explains McEwen, “without traction you have nothing. In the beginning we used recaps with no tread. Supplied from Arizona they were called Bruce Recaps. Then M&H came out with the first proper slick tire. Known as 8.20 x 15 it was made specifically for drag racing. “But as the tires got wider and bigger they became too flat. I had noticed unusual tire marks on the track. They indicated only the tire shoulders were working—the middle portion of the tread wasn’t. This was probably intensified by running a mere 4 to 5psi of pressure. When I began working with Goodyear they sent me tires, which I would take to a tire trimming shop to reduce the material around the shoulders. My idea was that the center of the tire should be taller than the shoulders in order to have full contact with the track.” Clearly, the benefits these developments conferred to drag racing were significant and Goodyear knew it.

Like tough business figures few of the great racing drivers have bland personalities. Truth be told, many of them are cantankerous egotists, the kind of men you’d prefer not to invite to your home. But the irrepressible McEwen, a man noticeably free of conceit and now in his 77th year, has a persona that is buzzing, fast-moving, filled with energy—a man still fascinated by every aspect of racing life. An absolute master at soaking up knowledge he never lost his appetite for information, a thirst evident from an early age. How sharp the eye how keen the wit; it remains a pleasure to bask in such company. During this year’s PRI show Mongoose McEwen will be signing autographs on Thursday 2-3pm at the Aeromotive booth (number 955) and on Friday from 1-2pm at the McLeod booth (3657).

The PRI Trade Show, which takes place Thursday, Friday and Saturday, December 11–13, 2014, in Indianapolis, has attracted over 1100 industry suppliers. They occupy 3200 booths exhibiting the latest developments in auto racing technology before 40,000 attendees from the US and 70 countries. The promoters proclaim that you’ll be exposed to more new racing products and pioneering technology than anywhere on Earth.

Of special note, the total value of the US racing market is estimated to be $13.5 billion, according to a survey conducted by the British racing trade organization, Motorsport Industry Association.

The PRI show is open to the trade only; it is not accessible to race fans. 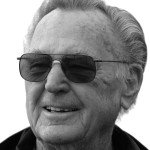 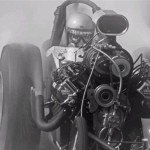