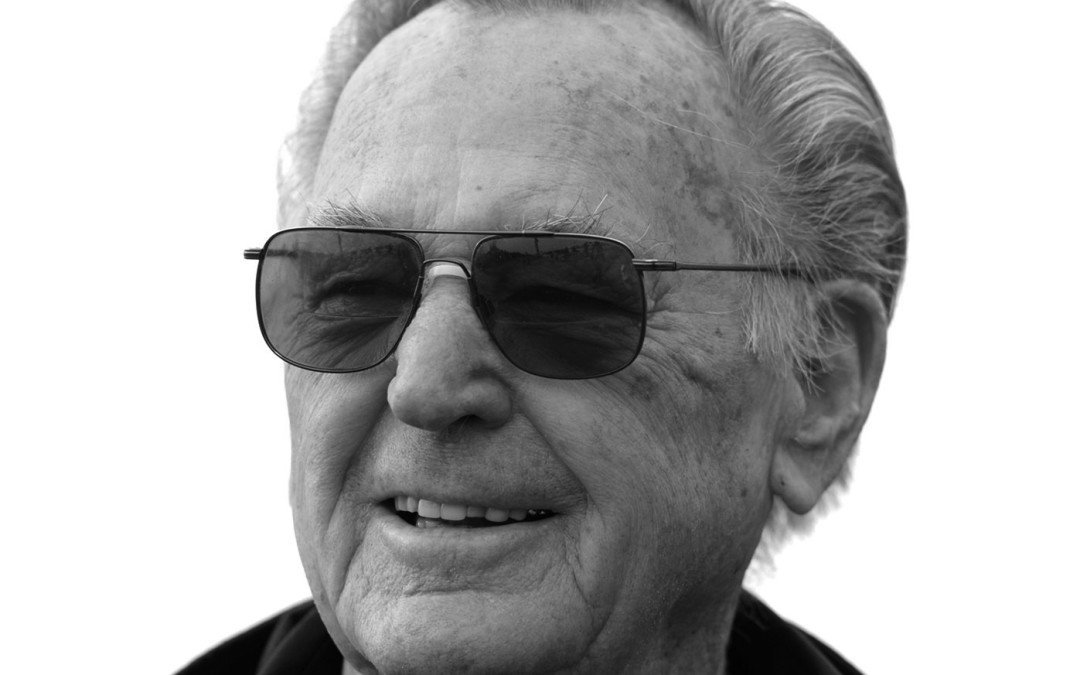 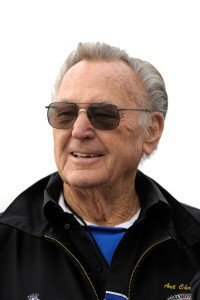 He was a driver, fabricator, race engine builder and pioneer in post World War II speed tests and drag racing.

Based at Chrisman and Sons garage in Compton, California, and working with his father, Everett, and his brother, Lloyd, he was renowned for three cars: his racy coupe for Bonneville competition and for contests on dry lake beds, his number 25 dragster and later his Hustler I. All were liveried in his signature golden-brown tones with contrasting white added to the Hustler.

From the late 1940s and throughout the ‘50s, he campaigned a series of highly competitive race cars. He became synonymous with the development of the Top Fuel dragster at a time when nitromethane fuel revolutionized the class. His Hustler 1 dragster, which he co-owned with Leroy Neumeyer, claimed the first U.S. Fuel and Gas Championships, in a 64-car field at the March Meet at Bakersfield in 1959. His résumé as a driver included multiple wins and speed records at the highest level in a career that lasted around 12 years. Art Chrisman’s innovations led many to recognize him as drag racing’s first statesman.

Greg Sharp, curator of the NHRA Motorsports Museum, said upon his induction into the Motorsports Hall of Fame, “Art Chrisman is truly a renaissance man. Rarely can one man build a racing chassis from the ground up, do the metalwork, paint it, build the engine that supplies the power for the record-breaking performance, tune it to its maximum potential, and drive the results of his handiwork to a hard-fought win. Art did all this and more.” 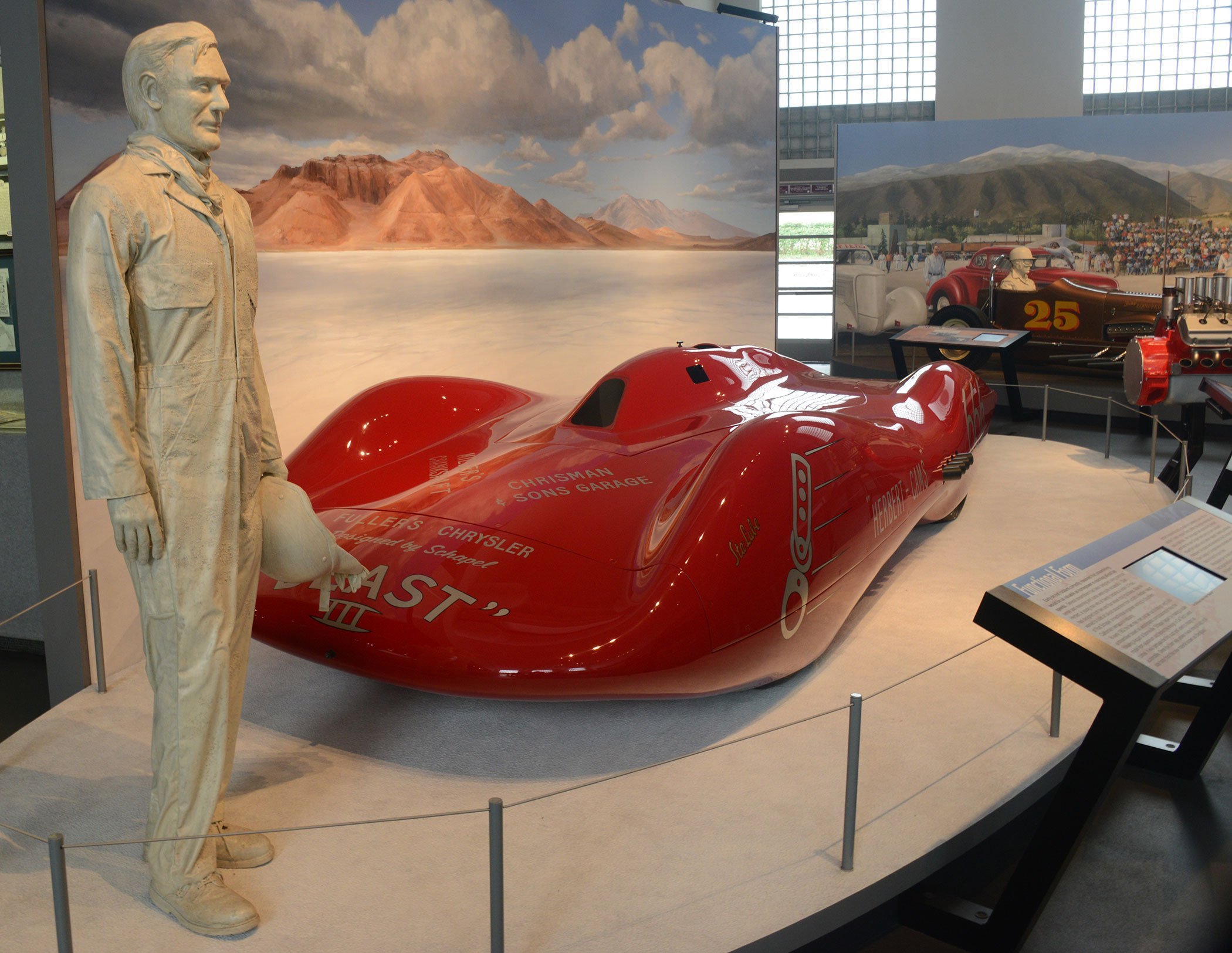 Chrisman started competing on California dry lake beds in the late 1940s and onto Bonneville in the ‘50s. He was one of five charter members of the Bonneville 200-mph Club after driving Chet Herbert’s Beast streamliner past the double-century mark, reaching 235mph in 1952. Eventually he switched to drag racing where he left his most indelible mark. 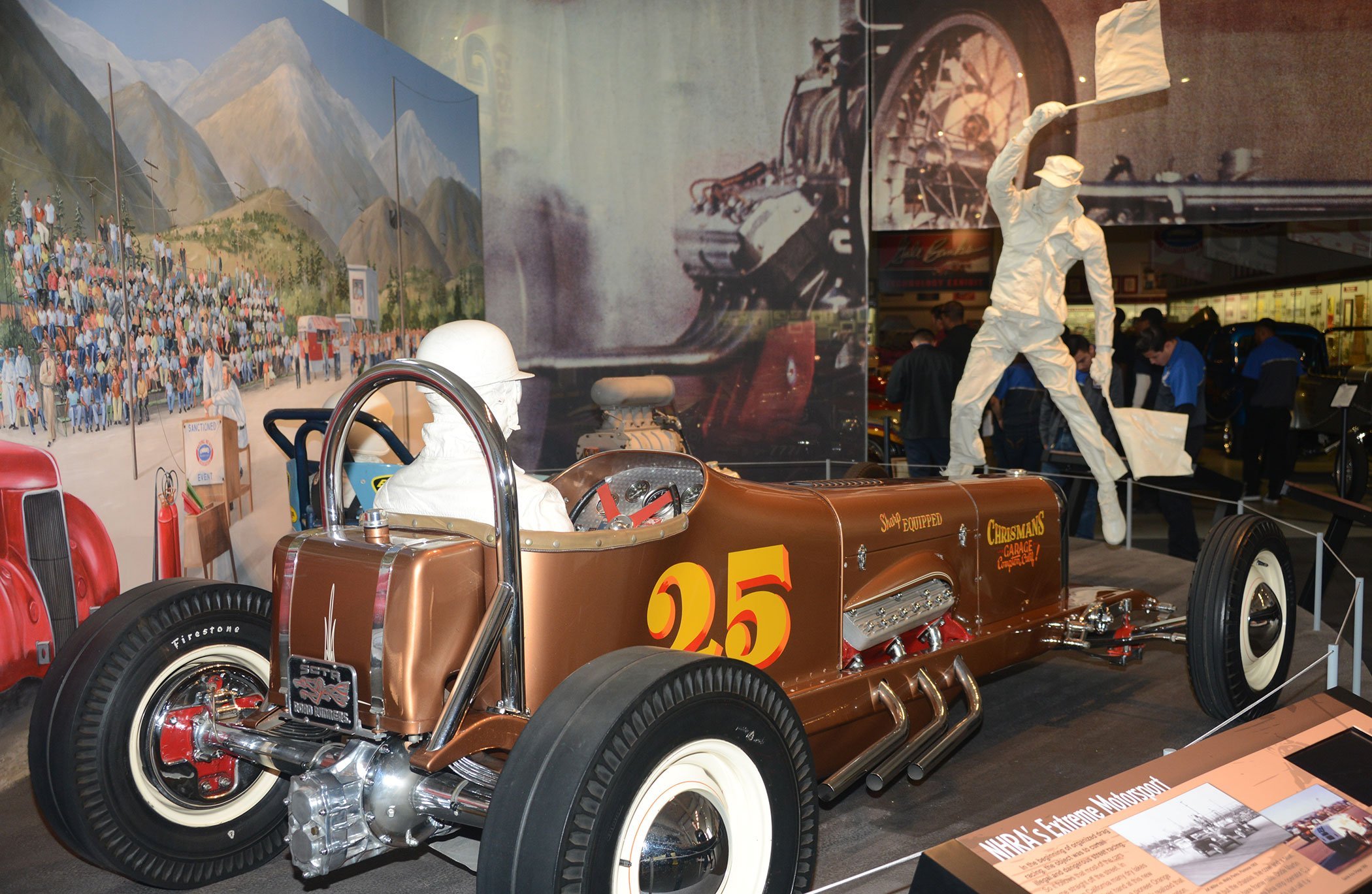 Using his #25 car, he is remembered as the first to run a dragster on the quarter mile at the maiden NHRA Nationals at Great Bend, Kansas in 1955. He was also the first dragster driver to surpass the 140 and 180mph marks, the latter achievement taking place along the back straight of Riverside Raceway in early 1959. 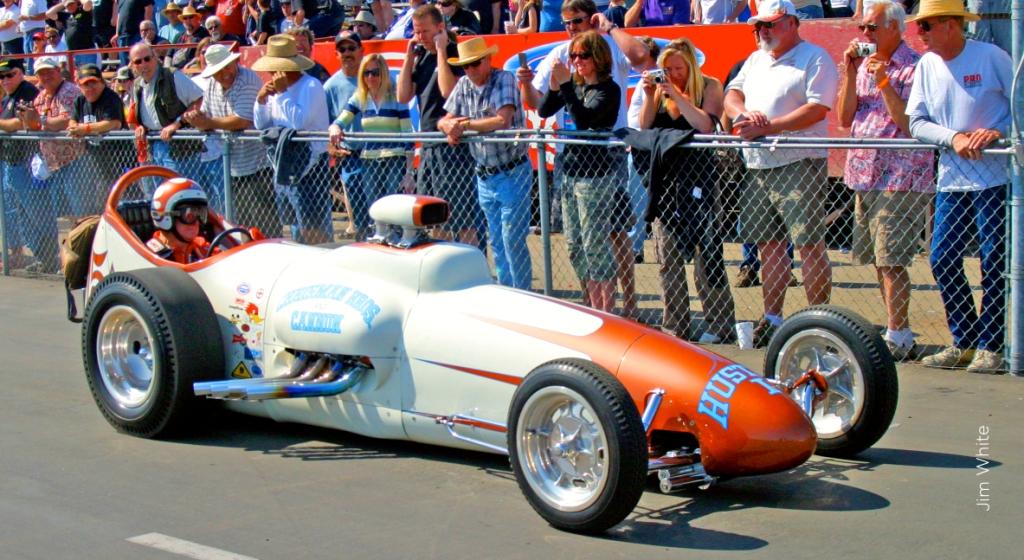 With his partner Frank Cannon, Chrisman built the Hustler 1 and in 1958 and 1959 he drove the blown and injected nitro-burning legendary machine to victory at the historic first Bakersfield Smoker’s Meet—Smoker’s was the name of the organizing car club. 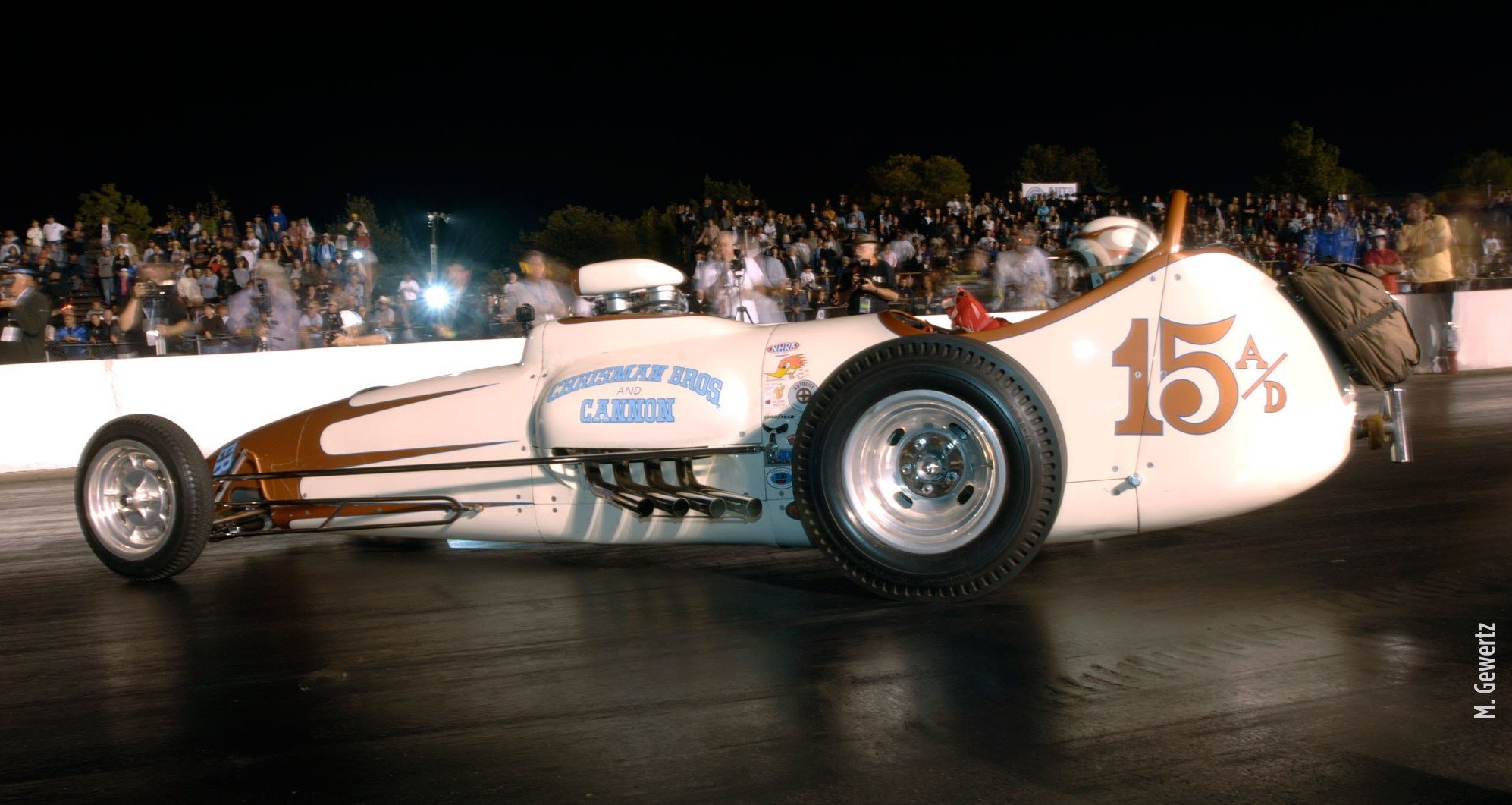 With notebooks filled with ideas that needed to be tested, they embarked on the construction of the Hustler II, which was owned by Frank Cannon. This race car embodied several concepts discerned from the Hustler I. Initially, they built it with a 110-inch-wheelbase chassis with the option of extending it. But their primary aim was weight reduction. And so it transpired; Hustler II was 150lb lighter than Hustler I, which was powered by a 392 Chrysler engine stroked to 454cu in. In contrast, its successor employed the 354 Chrysler. Yet despite its smaller displacement and corresponding deficit in power, Hustler II ran similar times to its predecessor due to its lighter weight. 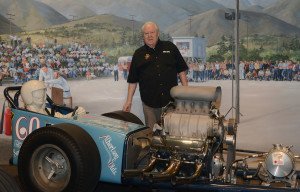 Says Tom Mongoose McEwen, “As a drag racer, Art Chrisman was responsible for the first thrust of innovative leadership in our sport. Initially, he mounted a crank-driven supercharger at the front of the engine, operating on 1:1 ratio. Then in the late-fifties, while running on gasoline during the NHRA nitromethane ban, he experimented with a variety of overdrive ratios on a top-mounted supercharger that was driven by a chain and sprocket.”

Employing a boat gear drive placed between the blower and engine, Chrisman experimented with overdriving the supercharger by 20 percent. Audaciously, he tried 50 percent, which massively smoked the tires. Eventually, he settled for 30 percent overdrive, which worked best but resulted in feverishly operating the clutch to counteract inefficient losses of traction. Ultimately, he introduced weaker clutch springs to promote slippage, which Chrisman believes was probably the first slipper clutch.

“It was his relentless trial-and-error exploits that propelled him to the forefront,” explains McEwen. “Blowers began small—the 471 was replaced by the 571 followed rapidly by the 671 that originated from a diesel engine. In those days, exact compression ratios and a host of technical specifications were not yet established and constantly being debated—we learned as we went along. When judged in this light, Art’s contribution to modern drag racing was significant.”

Chrisman, who was seven years McEwen’s senior, gave the Mongoose his first ride in a Fuel dragster, the Hustler 1. “The test occurred at Taft, an inconspicuous drag strip not far from Bakersfield, California,” McEwen recalls. “At that time I’d been driving a Gas dragster so he invited me to bring my helmet and fire suit and then said, ‘Alright Big Shot, you’ve been wanting to drive a Fuel car, now’s your chance.’

Chrisman retired from racing in the early 1960s, joining Ford’s Autolite Spark Plug division as the West Coast representative, an occupation that lasted more than 10 years. His skills in plug-reading were renowned and Ford, who was then in the process of launching a new racing plug, recognized the opportunity.

Mongoose McEwen contends that in his racing career he was constantly observing the plugs to ascertain how they fired. From their color, he’d quickly distinguish detonation from other aluminum maladies within the combustion chamber. Cracks in the porcelain indicated he had too much ignition lead and at Bonneville tiny bubbles on the porcelain suggested salt was being ingested. “He tried almost every type of fuel imaginable except hydrazine,” recalls McEwen, “and he gradually learned how to read their effects on the spark plugs.”

Hydrazine was much too dangerous to use. “Most of us never ran it,” insists Don Garlits. “At Cecil County, Maryland, a guy had Hydrazine in his 392 Chrysler. During his run, the entire engine exploded and at least one of the cylinder heads flew toward the stands. Fortunately no one was hurt.”

The forming of Chrisman Auto Rod Specialties (CARS) was Art’s final endeavor. Operating from Santa Ana, California, he and his son Mike led a team that built and restored vintage race cars and hot rods. In the mid-1980s they restored the Hustler I to 1962 vintage and regularly entertained the fans with smoking full quarter-mile exhibition runs.

Art Chrisman is survived by his wife Dorothy, son Mike and grandchildren.

For the full story complete with extensive illustrations see the November issue of Drag Racer magazine.