The 300 series is described as an organic friction type that with light pedal pressure transmits up to 800hp under normal circumstances; that is conventional tire compounds, gearing, and weight. On the other hand, the 900 series is characterized by its metallic friction materials that transmit up to 1,000 to 1,100hp. Residing in the hub of the outer clutch disc, urethane encapsulated springs resist four times the compression rate of uncoated springs. To sustain greater torque loadings, Ram’s cover assembly, which is equipped with a nodular iron pressure ring, develops clamping pressures of 2,400psi. Also worth noting, a special billet aluminum flywheel is provided with dimensions that properly position the clutch discs on the OE transmission input splines. Better still, this new flywheel-clutch assembly (PN 80-2112) weighs 50lbs compared with the rather hefty original at 65.5lb. 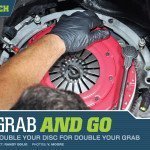 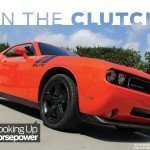 Hooking Up Horsepower with RAM Clutches 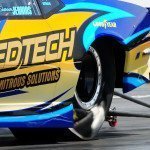