It’s normal to consider the brakes of passenger cars and tow vehicles to be as safe and reliable as an airliner. Then out of the blue it seems your assessment is skewed as a severe shake enters the steering, even the foot box and the seats aren’t immune from the tumult. How did this happen so suddenly? It’s got to be an out-of-balance wheel, but it isn’t. Instead, a front caliper had gradually seized and warped a brake disc. Here is news from Phoenix Systems about their superb new product BrakeShot. DOT approved it prevents the conditions that cause brake parts to behave badly. To determine if BrakeShot can cure a contaminated system, use BrakeStrip to determine the copper parts per million (ppm) in the brake fluid. BrakeStrip is a 60-second brake fluid test that turns shades of purple according to the level of copper in the braking system. If the strip indicates a copper level of between 50-175ppm, simply add a one-ounce bottle of BrakeShot to the master cylinder. After 50-100 miles of driving, BrakeShot will re-energize the corrosion inhibitors to protect all the metals in the entire brake system and prevent further corrosion. If, however, the test strip indicates 200ppm or greater, the brake system requires flushing and the fluid replaced.

With multiple patents pending a one-ounce shot of BrakeShot treats up to 1 liter of brake fluid, which is the average capacity of a vehicle’s braking system. Cheaper and quicker than a brake flush, BrakeShot is universal and works on all foreign and domestic vehicles. Packaged in a case of 12, each bottle retails for $15-$20. BrakeShot is expected to be released in April 2014. 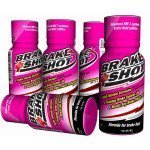 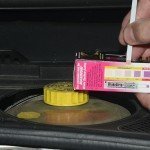