How to Make Key Adjustments to a Drag Racing Clutch 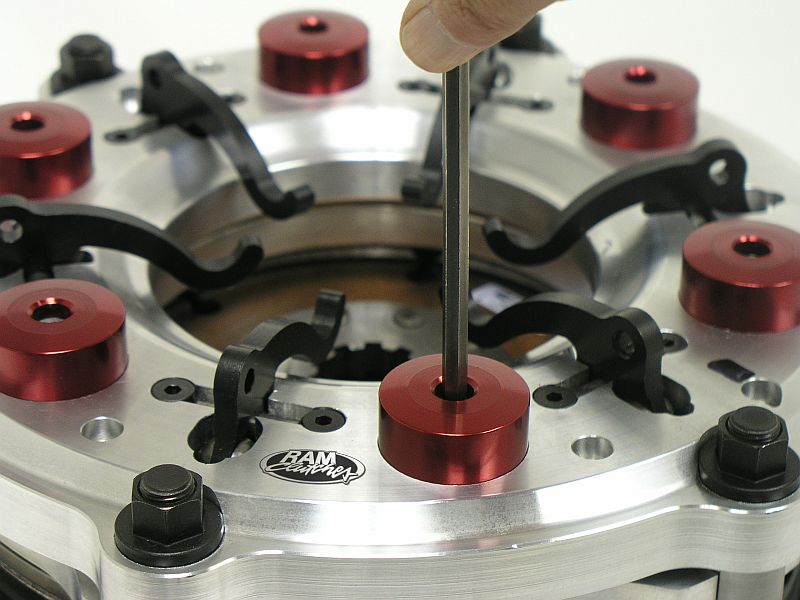 When we first take an interest in drag racing we soon realize that nothing in its mechanical history is more absorbing than the racing clutch and its operation.

Static or base pressure is altered by increasing or decreasing the pressure on the springs located inside the red aluminum housings. Data acquisition software is used to monitor driveshaft speeds. It calculates the amount of clutch slippage that occurs during launch and at intervals as the car is traveling along the race track. From this data the most appropriate base pressure springs are determined.

Centrifugal force or counter weights compress the clutch pack and cause the clutch to lock fully. The centrifugal force is used to bring the clutch and engine speeds together. It also provides the additional clamping force that enables the next higher gear to be held. A racing clutch could be constructed using only spring pressure, much like the diaphragm clutch used on the street car. However, under these circumstances the clutch would perform adequately in first gear but it would slip severely in second gear because of insufficient clamping force. On the other hand, if you provided the clutch with sufficient base pressure clamping force to hold second gear it would have too much clamping force in first gear and therefore promote too much wheel spin—it would overpower the tire. Thus by adding centrifugal weights to the fingers (in the form of small bolts, nuts, and washers), the clutch has the ability to add the perfect progressive clamping force in each gear, unlike a street-strip diaphragm clutch. The street-strip assembly operates with a fixed and unalterable clamping force. As a result it doesn’t have the benefit of the centrifugal action of the drag racing clutch, which smoothes the vehicle’s acceleration at all engine speeds.

Throw-out bearing clearance refers to the distance between the bearing and the clutch levers, which is usually set to around .300in.

The air gap is determined by the distance the cover assembly separates itself from the clutch pack and is usually measured by feeler gauge. Air gaps, which affect reaction times, are set for every run and, typically, vary from .030in to .075in.

Recent Advances in Drag Racing Clutches
Earlier this year Ram, the Columbia, SC clutch specialists, introduced two interesting advances in the operation of the billet racing clutch. First they placed a copper-alloy bushing between the clutch fingers and the clutch pivot pins. The bushings eliminate unwelcome friction between the two components and contribute lubricity to the mechanism, making disengagement much smoother. They also add longevity to the levers, the pins, and the bushings by eradicating binding and galling.

Second, they altered the layout of the six titanium stands, which had a tendency to splay outward under centrifugal forces at high engine speeds. The splaying of the stands was first detected in slight bolt-hole elongation in the aluminum flywheels. Ram remedied this affliction by switching the stand adjusting mechanism from the foot area, near the flywheel, to a position closer to the cover assembly. “The result,” commented Ram’s Pat Norcia, “has been unmistakable: the bolt holes now remain perfectly round in the flywheel and the cover assemblies slip easily over the bolts each time these clutches are dismantled.”

Until recently OEM truck release bearings, or throw-out bearings, were adapted for drag racing use. However, they are filled with grease and inevitably contaminate the racing clutch. In 2011, Ram introduced release bearings designed specifically for the purpose of drag racing. These bearings, which are made to suit fork style and cross-shaft style clutch release arms, are of a double-shielded, grease-free spindle bearing design. They also use a harder tool steel contact face to eliminate wear and scarring on the clutch fingers. By substituting light oil for grease the bearings spin up to full engine speed quickly. They also eliminate run-out. On the left rests a 10in billet flywheel with floater, two clutch discs, and six titanium stands. On the right stands the cover assembly, showing three machined slots in its steel friction rings. The slots, which are also found on the flywheel, allow the spent friction material to escape, enabling the adjacent wearing surfaces on the discs to remain flat. The friction rings are secured to the cover assembly and to the flywheel by thirty 12-point screws. Floater plates reside between the clutch plates and are available with friction surfaces of steel or bronze. Bronze is currently popular because of its excellent coefficient of friction and impressive dissipation of heat. If the clutch slips significantly while leaving the starting line the steel floater plate doesn’t dissipate the heat as well as its bronze counterpart. As a result the clutch disc temperature increases and the coefficient of friction decreases. In other words, it is harder for the counterweights to lock the clutch when a steel floater becomes hot. Placing a copper-alloy bushing between the clutch fingers and the clutch pivot pins eliminates friction and contributes lubricity. The bushings make disengagement smoother and add longevity to the levers, the pins, and the bushings. To overcome splaying of the six stand bolts at high engine speeds Ram switched the stand adjusting mechanism from the foot area, near the flywheel, to a position closer to the cover assembly. This new arrangement ensures that bolt holes remain perfectly round in the flywheel and that the cover assemblies slip easily over the bolts each time these clutches are dismantled. Only recently have OEM truck release bearings, or throw-out bearings, been replaced by units specially designed for drag racing applications. These new designs prevent bearing grease from being flung into the clutch. They also eliminate run-out and their tool steel contact faces prevent wear and scarring of the clutch fingers.