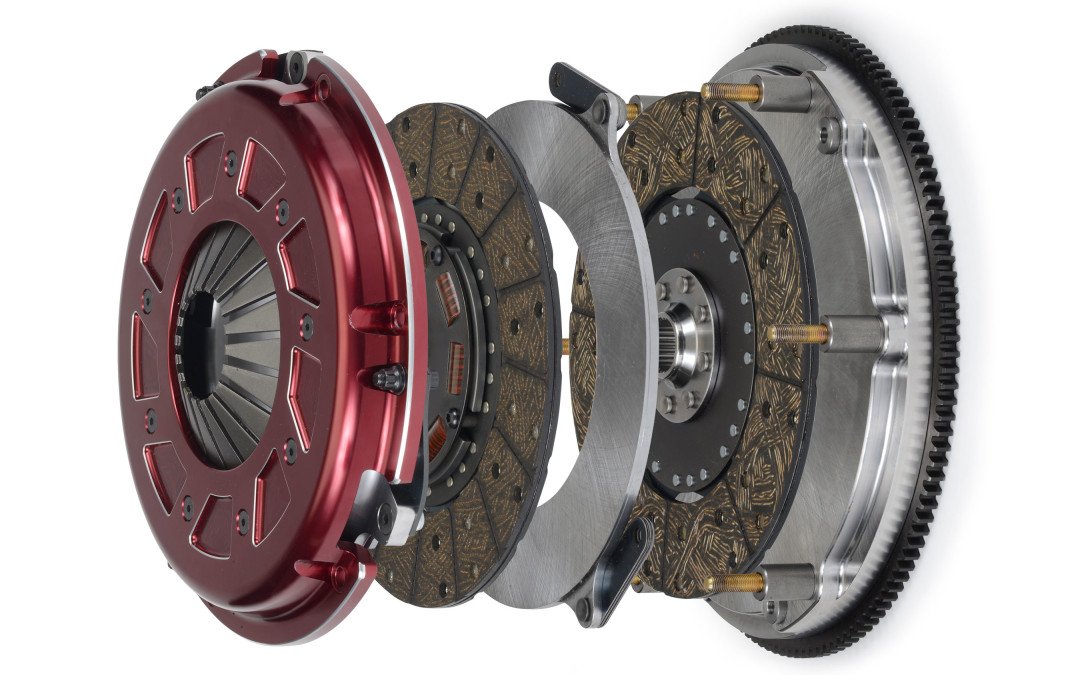 There are several schools of thought on the question of what constitutes a good clutch.

But first there are two separate strands to this narrative that need to be addressed: street or track. It’s key to distinguish whether the car will be used mostly for high-performance street-travel or for track use and its purpose needs to be decided. In either case the clutch has to transmit the car’s horsepower and torque and a stock clutch assembly will flounder in thermal shock and abuse, even in a slightly modified car. 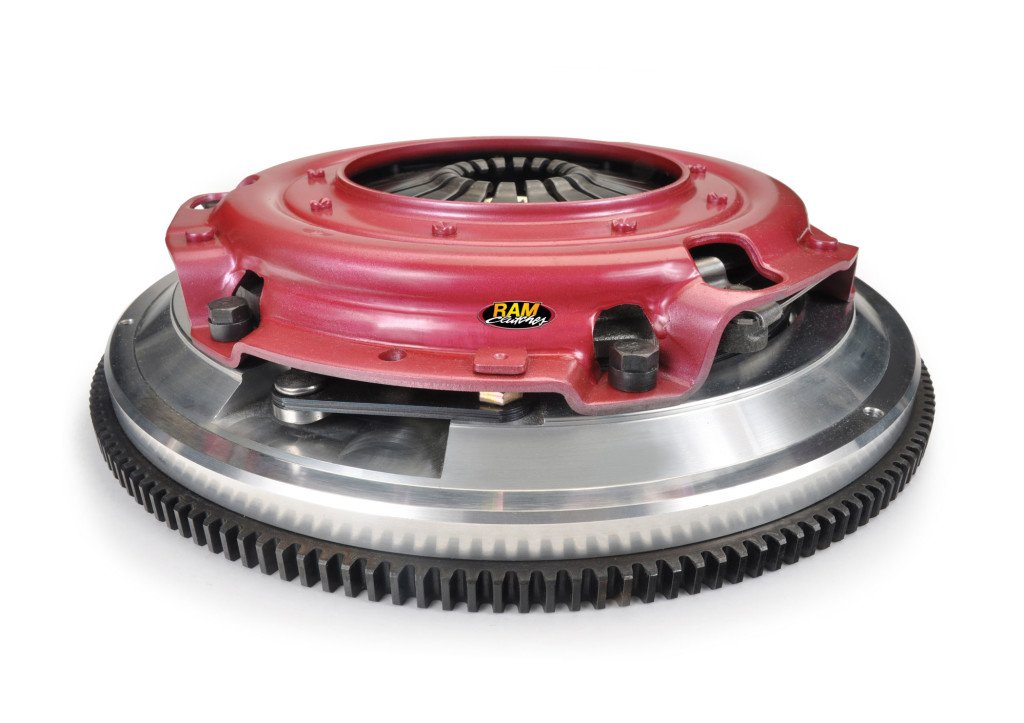 Over the past decade, increases in horsepower and in vehicle weight have established the dual-disc system as the new bedrock of clutch technology. Competent units are supplied as direct fitments, possess adequate holding power, retain driveability, operate with factory or aftermarket hydraulics and adopt flywheel weights compatible with factory computer controls.

Let’s focus our attention for a moment on selecting a good clutch for a high-performance street car that visits the drag strip occasionally. In this pursuit, the first consideration is usually vehicle weight. Accurate information about the vehicle’s poundage not only guides to the proper selection of an adequate clutch but also has relevance in the selection of the most effective flywheel. Another necessary statistic is the amount of power being transmitted through the clutch. And third, let’s not overlook the gearing. Lastly, pay attention to the size and type of tire conveying the rotational energy to the road or track.

Flywheels and a simple gearing formula 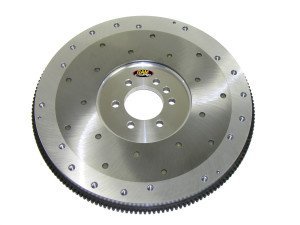 On this aluminum flywheel the manufacturer uses a 1/4in thick steel insert instead of the more conventional 3/16in to dissipate the heat thus and avoid distortion. The extra 1/16 inch of material may not seem important but it is.

However, shedding 10 to 15lbs of mass from the rotating assembly of a properly geared vehicle has a pronounced effect on its responses. Hence, lightweight, high-revving race cars take full advantage of the merits of the lighter flywheel. And there’s a formula, a scientific approach that brings logic to this exercise. 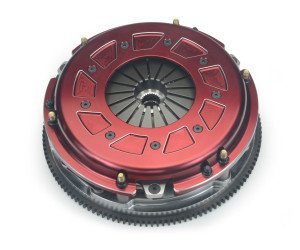 Flywheel weight is considered in conjunction with the vehicle’s gear ratio. For example, if the gearing is too high and the flywheel too light, the engine may not sustain its momentum under forceful acceleration and as a result the car could hesitate or “bog”.

But on a properly geared vehicle, that is a vehicle with a low gear that invites the use of a light flywheel, it will propel itself off the line with gusto and far into the distance. The formula for matching gearing to flywheel weight is usually available from transmission specialists. Chiefly they calculate the drive ratio, the car weight and the available tire traction.

Generally, lower drive ratios require more flywheel mass to launch the car effectively. The drive ratio and the weight of the car are probably the two most important factors in achieving an effective launch. Invariably, you aim for a drive ratio of 11 or 12:1. To calculate your drive ratio, simply multiply your lowest transmission gear by your rear gear. For example, if your low gear is 3.00:1 and your rear gear is 4.10:1 your drive ratio is 12.3:1. 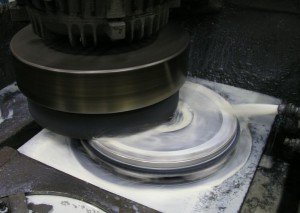 Blanchard grinder is used to overcome clutch snatch or chatter. It presents a true, flat mating surface on a flywheel by spinning the grinding wheel counter-clockwise while the flywheel table spins clockwise.

So what else is important on flywheels? In street use, the surest way to rid a flywheel of clutch snatch or chatter is the use of an organic clutch disc and to endow the flywheel with a ground surface. For this purpose, the Blanchard grinder is considered the best machine for preparing a true, flat mating surface. The grinding wheel spins counter-clockwise while the flywheel table spins clockwise and the distinctive cross hatch curves are the visual evidence.

Good clutch discs for street use and competition

The five elements of the dual-disc clutch comprise pressure plate,floater plate, flywheel and two discs. The outer disc has a sprung hub to absorb initial engagement; the inner has a solid hub that transfers the loading once the initial shock is absorbed.

The sprung hub is the precinct of the street clutch. It has the ability to absorb the shock loadings of initial engagement rather than transfer those onerous forces to the driveline.

Street cars weighing 3,000 to 3,500lbs and generating up to 600hp would usually run clutch discs with organic friction linings and a sprung hub. This style of disc produces a more moderate and manageable pedal. It also softens the shock loads on the transmission and rear end. You can slip the organic disc a little but excessive slippage will glaze it as it doesn’t possess a coefficient of friction as high as a competition disc. Thus when used in competition applications its holding power tends to fade as the heat rises. Heavy cars or cars generating abundant torque require more aggressive and durable friction discs.

The key to prolonging the life of an organic clutch at the drag strip is to allow sufficient time to elapse between passes. If the organic clutch is not permitted time to cool and recover or track duty exceeds 50 percent of the vehicle’s use, a metallic friction disc would be more appropriate. 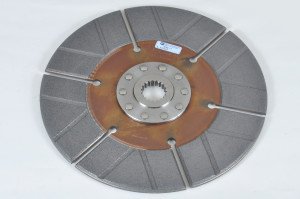 On race cars, the sintered iron clutch disc is widely regarded as the best choice for achieving slippage on launch. And its other praiseworthy qualities? Repeatability and endurance.

Metallics possess a higher coefficient of friction and withstand heat under arduous conditions, such as punishing drag strip exposure. They can operate under relatively low clamp loads and pedal effort but they often compromise driveability as they tend to engage more aggressively, which can lead to chatter on takeoff.

Tellingly, coefficient of friction is a vital element in clutch disc design. Identified by the symbol µ, it is the ratio between the force necessary to move one surface over another and the pressure between the two.

Of course, the term metallics embraces several other types of clutch disc, including ceramic, which tolerates some slippage and offers useful performance gains on above-moderate horsepower street cars. Other material options include carbon fiber, sintered iron and sintered bronze also known as ceramic). Sintered iron and sintered bronze are both more aggressive and demand stronger drive-train components to combat the applied forces. 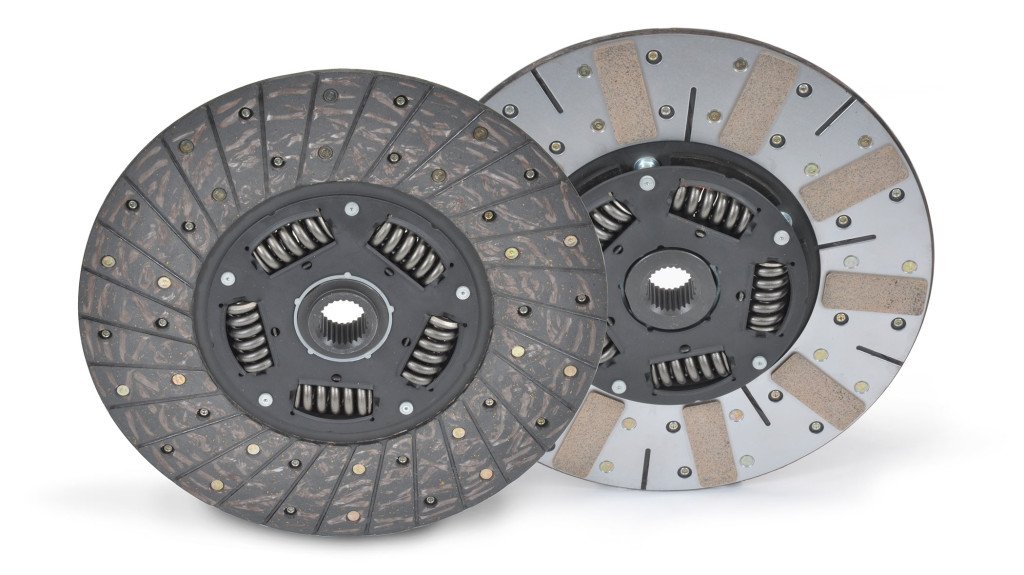 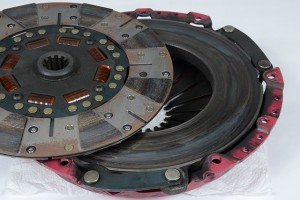 This image shows the after effects of severe clutch slippage on the pressure plate and clutch disc.

Clutch companies know the realities of their craft because they are in a position to measure the results—experience prevails over opinions obscured by guesswork.

And so it is with the well-regarded Columbia, South Carolina operation, Ram Clutches, who has kept its eyes riveted on the developments of competition clutches for the past 45 years.

“In full race applications,” acknowledges Ram’s Mike Norcia, “the sintered iron disc is preferred. It’s designed to allow for some clutch slip on launch but it keeps the power application smooth and limits tire spin—particularly useful on tire-limited classes—while accelerating and engaging gears.”

Those competing on the national stage generally employ solid, un-sprung disc hubs for quicker reaction times. In contrast, the street guy sensibly opts for the sprung hub, which offers softer engagement and potentially less damage to the car.

The good racing clutch and the significance of data acquisition 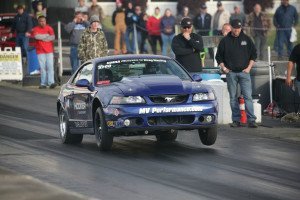 Though vehicle weight and gearing and material choice play significant roles in clutch design, so too does the unit’s diameter, which can contribute mass and propel the car without clutch slippage.

Former NMRA Real Street drag racing champion Tim Matherly says, “Using a two-step rev limiter and a line lock, or something to hold you in the beams, is key to having a consistent launch.”

Racers depend on data loggers or at the least a dual-channel tachometer that logs both driveshaft and engine rpm to ascertain if the clutch is slipping. Without this basic apparatus you cannot determine if the clutch is slipping or the tires are spinning on launch. They use the technology to record the data on every run and maintain the log based on weather, tire pressure, launch rpm, general track conditions and whether the car hooked or spun. They also pay attention to rpm drop on launch, which tells them the amount of clutch slippage. With this data they can analyze what worked and what didn’t.

Why wallow in silliness and ignorance when we have easy access to such a breadth of capable competition clutch-making professionals. Explore the options. 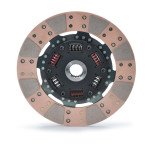 Why introduce metallic-sintered materials to a regular clutch assemblies?