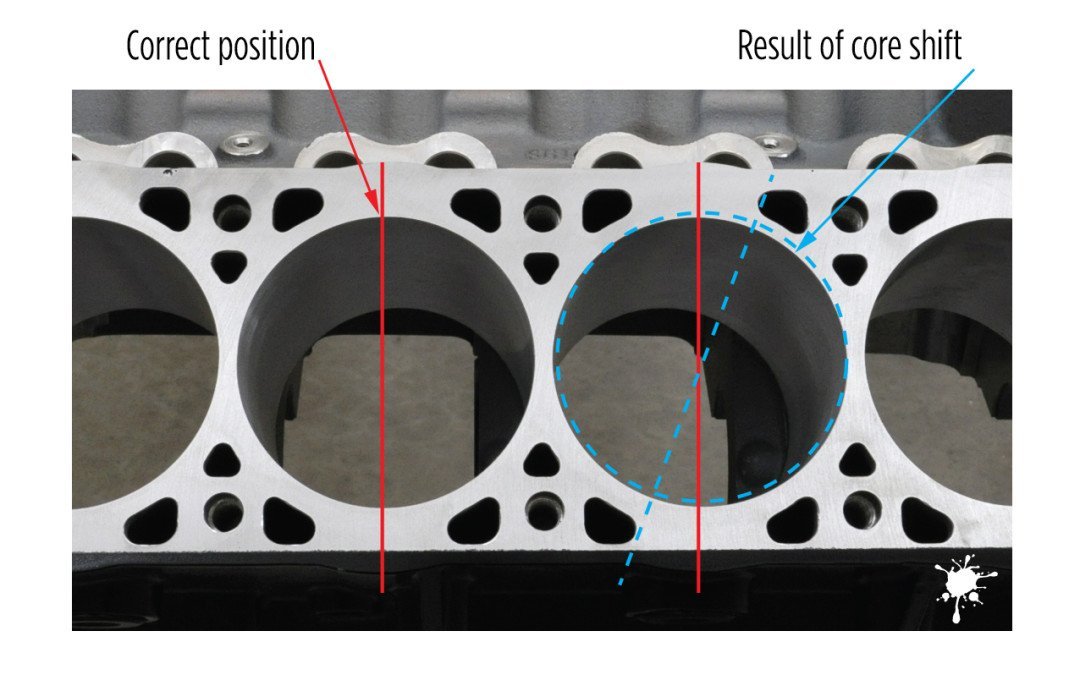 How a clever concept remedied misalignment in competition engine blocks

No other engine deficiency would have irritated racers, particularly professional drag racers of the last century, like core shift. A bitter source of anguish, they would describe it in a way not easily forgotten.

“We used mostly Hemi blocks,” commented “Mongoose” McEwen. “Often we would test fifteen-to-twenty blocks before finding one with consistent cylinder wall thickness. Keith Black had a method of measuring them, which typically demonstrated core-shift variations from around 0.090in or 0.100in to 0.040in. Consequently, if we raced those engines, the severity of the internal pressures usually split the cylinder walls.”

As you can guess, the impediment of core shift didn’t debilitate just the racing Hemi; Funny Car racer “Wild Wilfred” Boutilier’s reject ratio with big-block Chevrolets was similar. So there they were pencil and pad in hand, slavishly enumerating cylinder wall thicknesses, one engine block at a time. 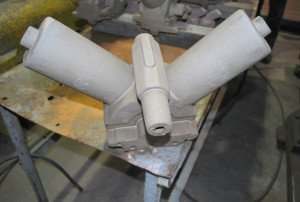 Traditional segmented cores comprise just two cylinders and part of the cam tunnel. Each core set is connected to the next by hand.

The term core shift relates to the deviation of a foundry core during the casting process. That is to say, the core moves from its original position, perhaps as a result of inaccuracies in the machining process or the setting of the mold, and leads to alignment problems when the mold is closed. Mold temperatures or pressure differentials on opposing mold walls also cause deflections of the cores. Whatever the cause, the result is evidenced by undesirable variations in wall thickness, which affects the final shape and, thus, the mechanical performance of the part. 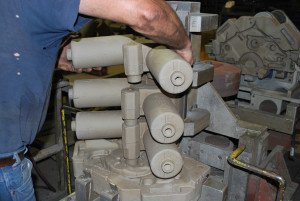 The Remedy: The problem has now been resolved by substituting multiple conventional foundry segmented cores with a one-piece major core. Though its accuracy and repeatability are superior, it’s an expensive tooling upgrade for manufacturers–costing over $100,000 to build just a steel crank-core box. So, some block manufacturers remain shackled to the old technique.

Of course the results of core-shift in passenger car engines were largely inconsequential. If the engine required over-boring 0.010in or 0.020in., there was little risk of a thinning cylinder wall jeopardizing the engine’s performance. But in the racing engine, where maximum displacement in some categories could propel a race team to national prominence, over-boring to its fullest extent was a fundamental. 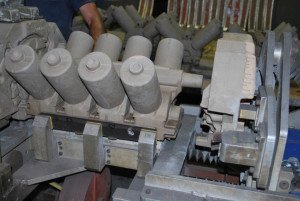 By using traditional segmented cores, however, variations in cylinder-wall alignment could occur during their assembly because each core comprises just two cylinders. Thus, four core sets—all stacked in place and connected by hand—complete the V8 cylinder assembly. 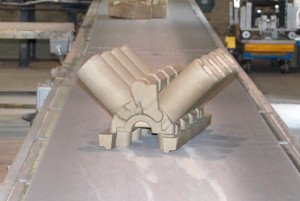 In contrast, this new integrated design combines all eight cylinders, cam tunnel, and main bearing saddle in one major core. In competition engine blocks, this evolution infers the elimination of dimensional variations.

A seasoned racer and World Products founder, Mitchell’s interest in race engine structures had piqued decades earlier. But now with his curiosity united to Fennel’s practical understanding, they introduced the concept of making one major core not only combine all eight cylinders but also to include the cam tunnel and main bearing saddles. 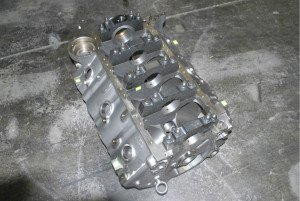 In so doing, they pioneered an important technique in the production of cast-iron competition engine blocks that synchronized the cylinders—ensuring they would all remain in their correct relative positions. The evolution also distinguished itself by the proximity of its mounting points for machining operations. The new layout employed internal fixing points located within the pan rails compared to its predecessor, which relied mostly on external pads.

Closer dimensional tolerance yielded several obvious benefits. Of course, consistent cylinder wall thickness promotes increased power. But equally important for the race engine builder is the fact that there are fewer failures during the machining processes. 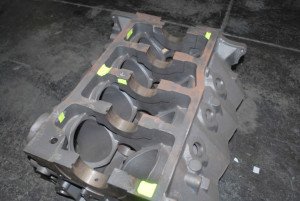 Engine blocks with the new integrated core boast an initial machining stack tolerance of 0.001in. Markers inside the pan rails indicate mounting locations for WP’s first of four machining operations. During these operations, three air-powered ball locks resting on carbide seats attach to the bottom of the block.

Says Boyer, “In years past, core-shift could inadvertently rupture a water jacket—like when you’re boring the main oil passage from front to rear.” As you might expect, one of the manufacturer’s standard quality-assurance procedures is to pressure-test the main oil passage by introducing 100psi of air pressure. If it leaks, the casting is doomed.

Late in 2012, PBM-Erson purchased the engine specialist World Products. Since then, Boyer’s progress in repairing its ebbing reputation has been noteworthy.

By necessity, he re-established trust with the firm’s suppliers, particularly their foundry and machining sources, which are all based within the US mainland. He also introduced a series of sensible upgrades to the firm’s product range as well as new designs. These measures included revamping the Motown LS block, the Man O’ War small-block Ford casting, the lightweight small-block for Chevrolet-powered circle track racing, and recently the introduction of the 8.1 and Merlin IV big-blocks.

Inevitably, one wonders how he mastered the mysteries of the casting craft. An ability to substitute the vision of solids with voids isn’t the gift of a moment.

But there is history. Though Boyer first rose to prominence in the preparation of successful short track oval racing engines, foundry work had played a pivotal role in his teenage life. 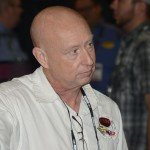 Boyer, an Iowa native still recalls the task of removing red-hot tractor hubs from the shaker in his local foundry. The shaker was a rubber-matted vibrating table that shook the sand from the castings. The hubs weighed approximately 400lbs each and consequently were too heavy to fall from it into the carry basket. So a person was obliged to enter the shaker brandishing an 8ft pole with a hook at its end and drag out the hubs. This vivid event occurred every 35-40 seconds, eight hours a day in temperatures of 130-degrees Fahrenheit.

I used to think Bob Glidden’s memorable quote, “All hard work ever did was to make you tired,” was a salutary reminder of the merits of individual productivity. But this anecdote stretches Glidden’s motto to its maximum. Make no mistake Dick Boyer knows the casting craft.