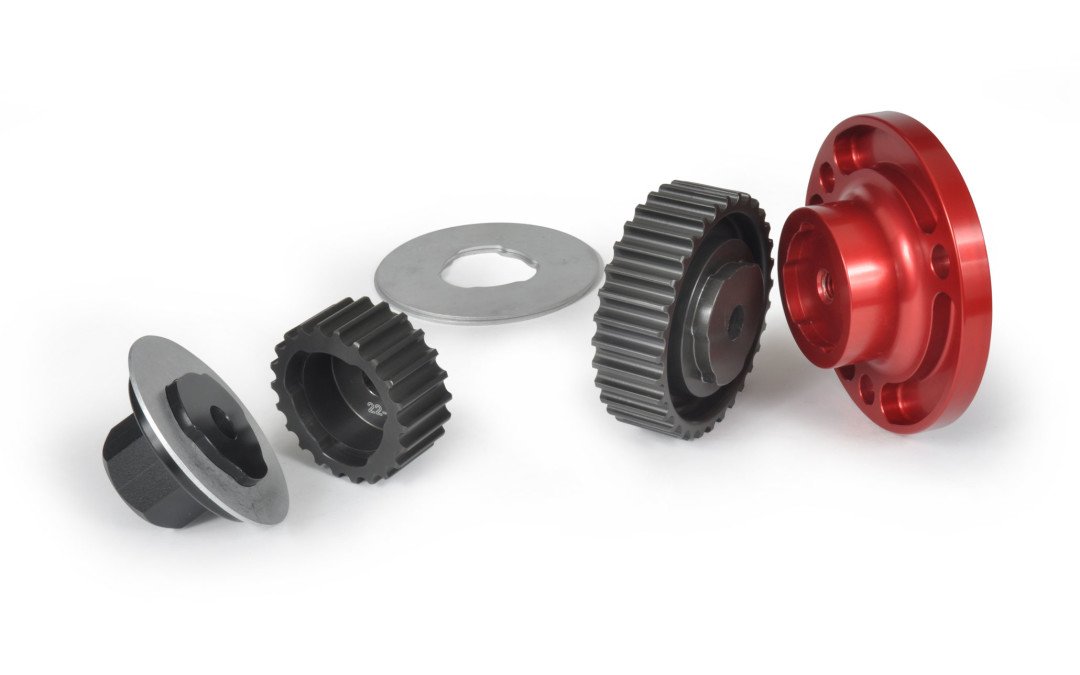 The R-lok accommodates an adapter, a series of pulleys—HTD or Serpentine or V-Belt—and an end nut to interlock with the harmonic balancer. The advantage is that all components share a common axis with the balancer, each one registers precisely. In addition, part # KRC 38140500 as shown here, allows all the components to be secured by a shorter than normal bolt for added strength. Thus the need for keyways and keys is eliminated. When secured in the recess of the harmonic balancer, the black register hub centralizes the pulley assembly and in turn holds the damper in place. The red adapter is secured to the balancer by three bolts and the remaining HTD pulleys are secured to the red adapter. The end nut allows the engine to be turned over. Equally interesting from KRC is the emergence of the C-Lok. This is a clever, quick-lock device created to secure pulleys to dry-sump pump shafts. Devised in the form of an expanding collet, the C-Lok expands in the bore of the pulley while simultaneously tightening onto the shaft with just a few turns of its hexagon nut.

C-Lok: Gone are the ancient keyways, keys and setscrews that risk becoming seized or scarring the shaft when tightened. The principal advantage of KRC’s unique 17-spline pulley drive featured on their power steering pumps is its convenience: pulleys secured by a nut and washer slip off with just the touch of finger and thumb. A more secure mounting method, this spline drive system renders mechanical pullers obsolete. The arch objective in HTD pulley-making is to achieve precise tooth pitch throughout the pulley’s 360-degrees circumference. Even a slight mismatch will cause improper meshing of belt and pulley and trouble soon follows. The two advantages of the HTD pulley over its square-tooth predecessor is its superior ability to release the radius tooth form from the belt groove. Secondly it’s quieter in operation. Moreover, its appeal is greatly enhanced by the application of hard-coat anodizing. Though more expensive than conventional anodizing, the hard-coat creates an immensely resilient operating surface and guarantees longevity. These pulleys lasted four races only

Tooth belts and pulleys were developed to eliminate slippage. But if their 8mm pitch varies—that is the distance from one tooth to the next—the result is severe wear on the teeth ends. Subsequently, aluminum particles from the pulley become impregnated in the belt and premature failure is imminent.

Inconsistency of tooth pitch is usually caused by inadequate production tolerances. The best pulleys owe their supremacy to being subjected to tight manufacturing tolerances regardless of tooth count. KRC uses the 4-axis Mori Seiki lathe with a custom-made gear-cutting head. Lastly, a well-machined pulley needs the application of hard-coat anodizing on a well-prepared surface.