In both applications, the alternator is driven by the water pump and the brackets accommodate the small Powermaster 138mm Denso alternator.

Much to the delight of the asphalt short-track racer the new small-block bracket moves 5lbs to 6lbs of alternator mass to the more favorable left side of the race car. KRC believes it to be the first of its kind. Supplied with bolts and spacers and assigned part number KRC40565000, this new bracket is perfect for pavement crate-engine race cars. It costs $113.26. The other bracket is a reversible style that positions the alternator on either the left or the right of the big-block Chevrolet engine. Instigated by requests from Northeast big-block racers, this bracket is also furnished with bolts and spacers, is assigned part number KRC40575000 and costs $93.08. 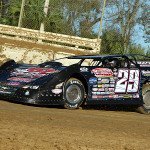