SEMA recollections: a positive narcotic for the masses 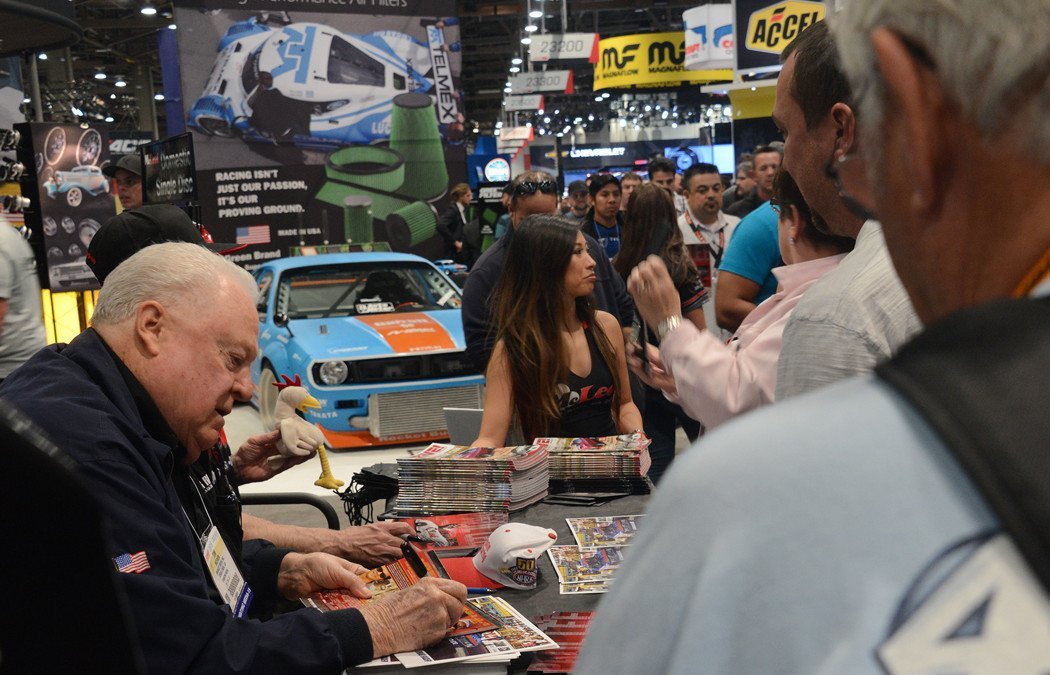 It is hard to think of the Specialty Equipment Market Association’s (SEMA) greatest moments during their herculean 2015 show, November 3-6. Held as it has been since 1977 at the Convention Center in Las Vegas, it throbs with an unflagging appetite for growth.

The combination of the SEMA exhibition and Las Vegas, a venue never denounced for its subtle flair brought broad appeal. Marking its 49th consecutive event, the four-day show attracted more than 140,000 individuals. From the compulsive youth to all levels of visiting management—potentates  to 60,000 buying companies—tens of thousands of them ambled along the congested corridors and outdoor enclosures with an adventurous spirit.

Mind you, the exhibitors’ appearance today is much more raffish than yesteryear; a time when they presented themselves in suits and ties. Spiffy or not, there’s no arguing with SEMA’s captivating business model for it is immensely successful and hence one imagines no easing of the reigns in sight. 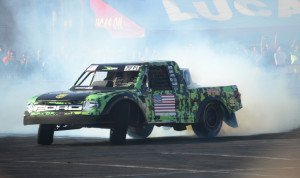 But if your interest lies mainly in frequenting the Racing and Performance areas but unwittingly wandered into the abyss of truck conversions, wheels, tires and myriad other accessories, you would discover its vastness overwhelms—much to the consternation of many exhibitors. The notion of seeing the entire show in three days, not to mention the simultaneous AAPEX exhibition, the Sands Expo, isn’t viable, which is the part that bothers some exhibitors.

But what can the organizers do as increasing numbers apply to join the club, including a sizable proportion from the Orient? Somehow these newbies need to be accommodated, and accommodated they were this year with the erection of a new large tent marquee adjacent to the west side of the two-story South Hall. 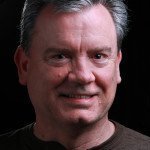 Of prominence in the Central Hall were Holley’s exhibits. Their design and development team is led by the able Larry Tipton and in recent years his supremacy was demonstrated by the creation of the popular Street Demon carburetor and last year the Hydramat. The Hydramat is a device that attracts every last droplet of fuel in a tank, a substantial contribution to the performance market and indispensible to all racing-style tanks and cells. 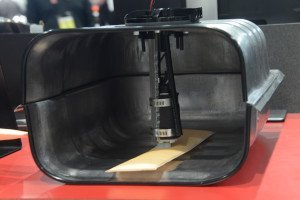 This year, Tipton’s fertile brain brought us a universal in-tank fuel module that eliminates the need for a return line and conventional fuel pressure regulator. A retrofit return-less EFI fuel system, it installs in any tank of varying depth from 5.5in to 12in.

Also of note is the introduction of their innovative Sniper self-tuning EFI system. Designed to fit single- and dual-carburetor intake manifolds, it will support 600hp (the four-injector version) and will be brought to market during the first quarter of 2016. Prices start at $999. 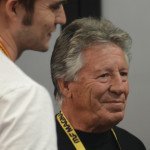 Further along the Central Hall at the Magnaflow booth was Mario Andretti, one of the most accomplished Americans in motor racing history. Andretti won the 1978 Formula One World Championship driving a Lotus 79 and hundreds of races in a career that spanned several decades.

Mario’s presence brought to mind the exploits of his eldest off-spring. Michael Andretti had the added advantage of featuring in those wonderfully reticent interviews. Not for him to gush about how his team had won the day and the other meaningless platitudes. No not those; for some of us Michael’s interviews were as refreshing as the race he had just run. We already knew how indispensible the team was—and, of course, they were being paid to be such. So, spared the banalities, he illuminated the viewer with matters of race craft—often by what remained unsaid! 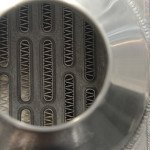 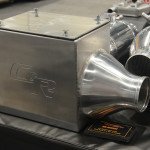 This year’s SEMA winner of the ‘Best New Performance-Racing Product’ was claimed by C&R Performance. An intercooler for drag racing vehicles, this new product is manufactured from 5052 aluminum with large roll-formed conical inlet and outlet ports. The central container is filled with dry ice that provides an environment of minus 110F that cools the induction charge to the engine. Operating at 100 degrees cooler than ice water, a removable sealed lid secured by four Dzus fasteners offers access to the container.

Known as an ice-barrel cooler, it has a vent for dry ice and a drain for ice. C&R Racing is part of the PWR operation with bases in Indianapolis, Indiana; Mooresville, North Carolina; and Australia. You can see this SEMA-winning product at the PRI Exhibition Indiana Convention Center, December 10-12, 2015, Booth #3721. 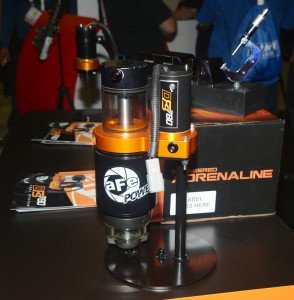 Up on the north end of the Central Hall at Booth 21301 was California’s aFe Power, who won the ‘Best New Performance-Street Product’ award with their diesel fuel system, DFS 780. In development since 2013, this product is designed to supplement existing diesel fuel systems and its functions are multiple. It separates air and water and contaminants and any foreign particles from the fuel system. It also boosts fuel pressure and provides sufficient fuel flow to support 2,000hp. Perhaps more pertinently, it is said to improve throttle response and horsepower at all engine speeds.
Languishing at Meguiars’ booth was the most eye-catching 1940 Mercury Sport Coupe you could imagine. This beauty was prepared by New Jersey specialists Bob Ida Concepts and nearby stood his son Rob. I regretted not snapping a picture of his unassuming presence. Quietly spoken and bedecked in a soft cap his attention was much in demand. 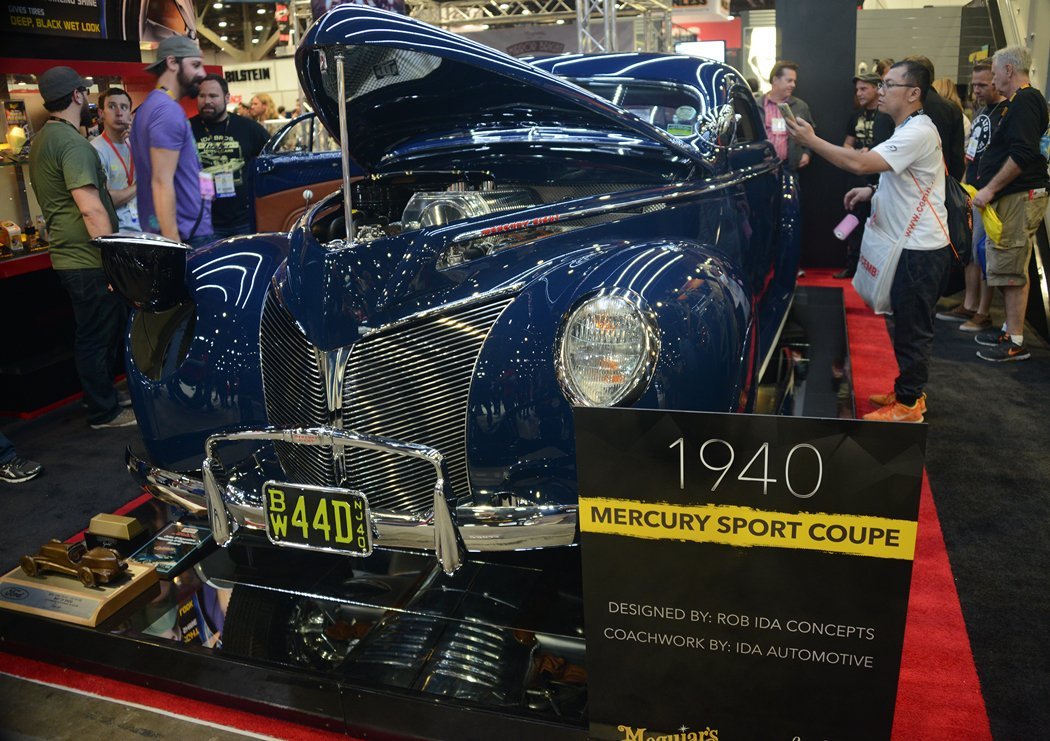 Then, we discovered Ted ‘Bud’ Keating, a man of considerable experience and energy, has joined Ididit, the long-established Michigan producer of fine steering columns for Hot Rods. Keating won the admiration of many when he, in collaboration with Jack McInnis, steered the ship so competently at Dart Machinery for a decade and a half .

Finally, this week we learned through the market research firm YouGov that only 14% of Americans surveyed believe life will be better for their children and that 55% think the “rich get richer” and the “poor get poorer”. Sixty-five percent agree that most big business have “dodged taxes, damaged the environment or bought special favors from politicians”. If the throngs of SEMA* visitors were troubled by any of these less-than-cheery statistics, they tucked them away in the backs of their minds and seized the moment.

* SEMA (Specialty Equipment Market Association) was founded in 1963. Its first official show took place in January 1967 under the grandstands of Dodger Stadium in Los Angeles, California. The event, which featured 98 booths and approximately 3,000 attendees, was organized by Robert Petersen.

In 1974 the show moved to the Anaheim Convention Center and in 1977 it was relocated to the Las Vegas Convention Center in Nevada. This decision was influenced by dependable weather, big-name entertainment and a world-famous location.