As you probably know there are at least two distinct styles of hydraulic clutch release bearings. The aftermarket style is distinguished from the OEM style by its lack of constant contact—it functions only when the clutch pedal is depressed.

But of greater significance, perhaps, has been Ram’s emphasis on developing a series of release bearings to adapt Tremec’s range of transmissions to all Muscle cars, which leads us to their current new product release. Columbia, SC: Ram Clutches has created a new hydraulic release bearing kit to accommodate the coupling of the Tremec TKO transmission with a dual-disc clutch-flywheel assembly to Chevrolet small- and big-blocks. In fact, it works startlingly well in most GM applications, including those with taller single-disc units.

Previously, combining Tremec’s illustrious 5-speed with the more effective high-performance dual-disc clutch-flywheel assembly and adapting them for use with small- and big-block Chevrolet engines was not usually possible unless the release bearing guide collar was machined to reduce its depth. Equipped with a shallow base, Ram’s latest hydraulic release bearing kit accepts all single- and dual-disc clutch assemblies up to 0.150in taller than the original single-disc arrangement.

Dual-disc clutches require a spacing of approximately 0.200in between clutch diaphragm fingers and release bearing, while single-disc units require 0.150in. To adjust the gap correctly, spacers of 0.100in and shims of 0.045in thick are provided. Ram also provides the installer with the measuring information to determine the exact position of the fully retracted release bearing in relationship to the diaphragm fingers.

This latest kit, assigned part number 78131 and priced at $253, concludes a fruitful development program undertaken by Ram that couples most Tremec transmissions with high performance dual-disc clutches, adapting them for use with GM, Ford and Chrysler power units.

Lastly, it’s also worth noting the original equipment release bearing operates in constant contact with the clutch fingers. This is in sharp contrast to Ram’s device, which is conceived to function intermittently. It operates only when the pedal is depressed and, hence, is free of chirping sounds sometimes evident in the former. 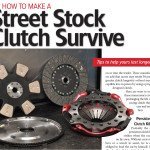