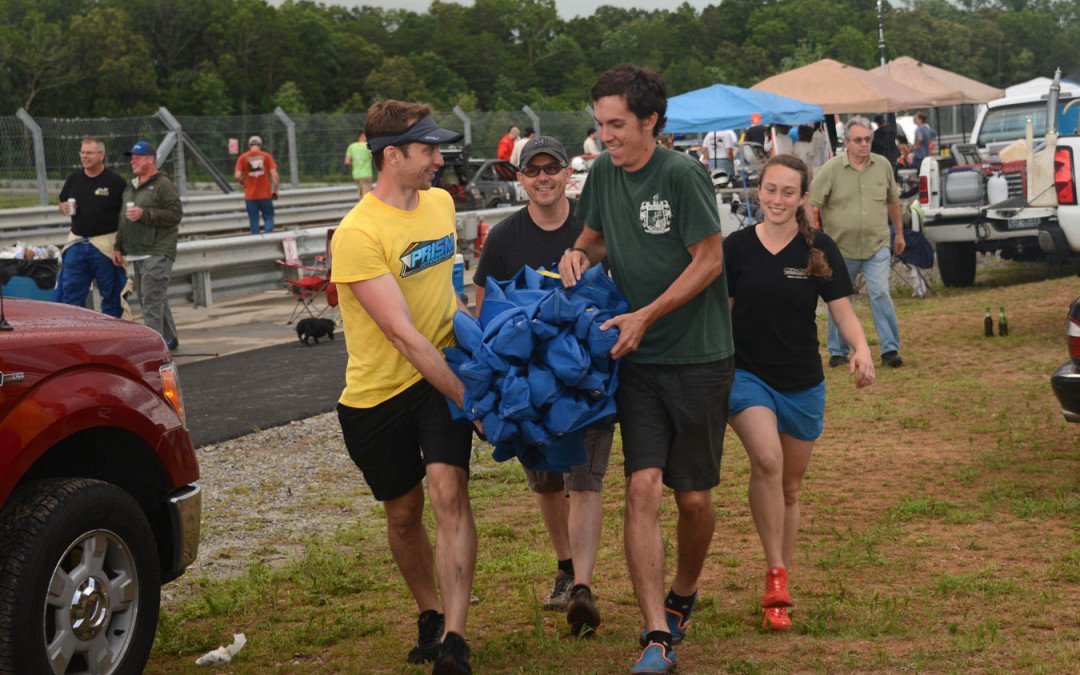 ChumpCar has been a well-head of cost-effective endurance competition for the road racer since its founding in 2009.

It introduces hours of valuable road racing experience with a special emphasis on long distance driving and affordability. The race cars are converted road-going machines mostly from the nineteen-eighties and nineties with strict cost limits in place to control spending. Competitive Dirt Late Model race cars often consume four sets of expensive racing tires on a weekend unlike ChumpCars that typically run two endurance races on one set of tires by rotating them. The principal safety measure consists of a specified roll bar structure.

On the first Saturday of summer, I had come to Atlanta Motorsports Park. A mere seven miles from our office, I was there to compete with the Borg Warner team from Asheville, North Carolina in a 12-hour race organized by ChumpCar rival World Racing League. 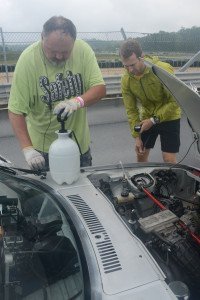 AMP’s compact 2-mile course is one of contrast. A short straight that runs past the start-and-finish line connects a seemingly unending sequence of undulating third and fourth gear corners. In my ignorance I had wondered why so many drivers missed their apex at Turn One. Now I understood: situated on falling ground it’s almost impossible to see and appraise the tricky turn from a low racing seat! On this occasion five of us would take the wheel of a 1984 Mazda RX7.

For the Borg Warner team, who thrive on five or six endurance races each year, preparations had come together by the barest of margins. During Friday testing with ambient temperatures nearing three figures and humidity levels similar, engine overheating was reported. Soaring to 220F and beyond, the diminutive power unit was telling us it was facing its last event.

Later that evening, racing apparel—suit, boots, socks, gloves, helmet and Hans device—was presented and checked by kindly officials. At 7pm the Race Director held the racers meeting. An able man he was neither lecturing nor hectoring, still his address seemed to take forever—about the time it would take to run two SCCA races. During the meeting a slender, bearded track official momentarily interrupted, saying that if you miss your apex at Turn 16 it will eat you alive. He was right. 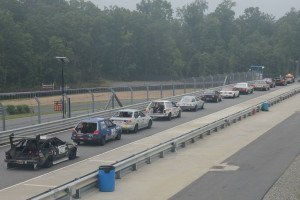 When we arrived at the circuit around 7 o’clock on race day most of the cars were already lined up along pit lane. Behind its Armco barriers a line of tents were uniformly installed with folding chairs already in place for team members. 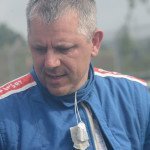 The race getting under way at 8:30am, Borg Warner’s Matt King, a former Indy Car race mechanic for Team Penske, took the wheel of the Mazda for the first stint. During the initial stages he had worked his way forward to fourth place but had been dragged back by inevitable engine overheating concerns.

At 11 o’clock I hopped in, adjusted the seat, got the belts fastened and was warned: “Coast if you have to but don’t allow the water temperature to climb beyond 220F”. I managed almost a lap when one of the fuel pumps, the lift pump failed. Towed off the track to our pit, our crew chief and team director Mike Harris dispatched one of our members to the nearest parts store for a replacement pump.

On my second attempt to join the race the gear shifting mechanism tightened during the first out lap and soon only first and second gears were operational.

Returning slowly to the pit the team lofted the car onto jack stands and set about removing the gearbox. The plan was to investigate the trouble, repair it, refit the gearbox and run as many laps as possible thereafter. But as the dismantling and examination process began to take its time our ambitious plan was soon out of shape. 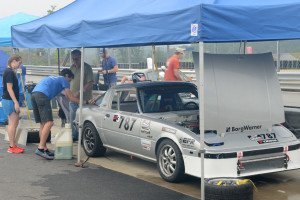 For outsiders, racers and their methods of operating are likely a culture shock. Their efforts single or collaborative are often memorable. Clearly they are there with an intention to win the race yet when things go wrong they are already thinking about solutions. Whether professionals or racers of modest means, they invariably adopt this approach, no matter how intractable the situation. That said, even some of our neighboring racers, observing the task undertaken, suggested it might have slipped our minds that fixing the gearbox in the comfort of our home garage might be more practical. 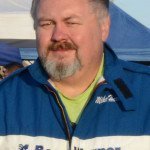 Borg Warner crew chief Harris appeared to observe everything with a philosopher’s gaze. Thirty-five years in motorcycle racing, drag racing and now road racing had given him an acute sense in discerning the possible from the impossible and this current impediment seemed to be of the former.

The whole demeanor of individuals addressing such obstacles has always been attractive to anyone with a sense of achievement. Though puzzled, as none of them had previously dismantled a gearbox, they ran in the heavy sands of adversity for a while yet they succeeded.

Around 5pm, following six hours of delays, our gearbox was again operational and as the car trundled down pit lane there was much good cheer offered by the onlookers. Galling in the selector rods had been corrected and now its only deficit was its wide ratios, forcing us to accept slower acceleration up the hills. Though we ran in the low1m:41-second bracket compared to a nimble twenty-seven year old BMW E30 in the 1:37’s, it was after all an endurance race and the E30 had retired before half distance. But at 8:30pm the modest Mazda captured the moment as it romped across the finish line! 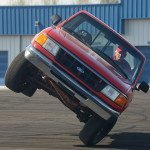