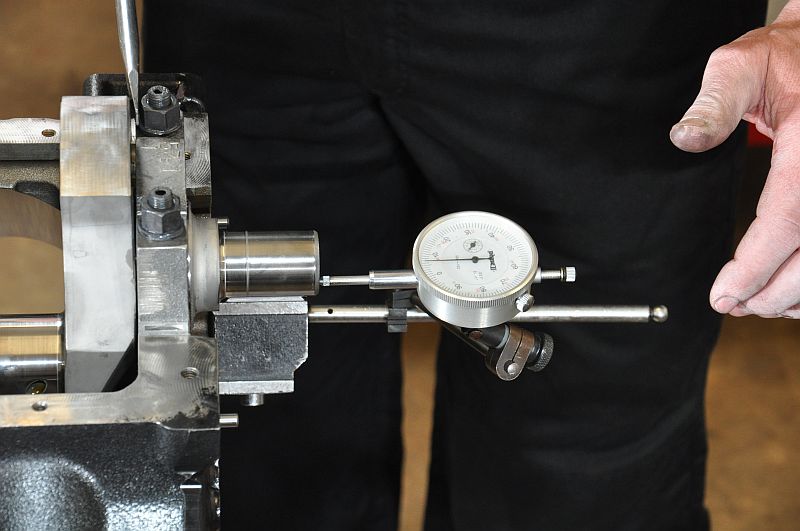 Because of the G-forces the engine oil is sequestered in a deep repository in the right rear corner of the oil pan, which is where the oil pump pickup resides. Some racers refuse to install an oil temperature gauge, “because the oil temperatures of a Dirt Modified wet-sump system are so high—up and over 300F—that it scares the hell out of them,” exclaims Kevin, who relies on Champion oil to combat the extreme heat. “No failures so far!” he assures.

Let’s say your 400cu in race motor operates under water, like a fluid pump, and with every two revolutions of the crankshaft it would ingest and displace 400 cubic inches of water—receiving it through its intake and discharging it through its exhaust. But when the engine operates with air, especially at high engine speeds and equipped with a small cross-sectional area in the intake ports, it will consume more than its stated displacement. By pulses and resonant tuning and inertia and air speed and all kinds of trickery, the savvy race engine builder knows the more air he can persuade to enter his cylinder the more power he will generate.

Carefully, using the cylinder bore as his beginning point, he’ll usually select the largest intake valve he can fit into the combustion chamber, making sure its head is positioned at an appropriate distance from the cylinder wall. Positioning it too close to the wall creates a shrouding effect and impedes the flow of the incoming air. He’ll probably use a valve with a concave head to save weight and he’ll surely consider the optimum compression ratio. The more astute will deliberate on exploiting the advantages of squish or “quench” which accelerates the combustion process. On the compression stroke the air-fuel mixture is squished out from the flat, narrow spaces between the piston and the cylinder head and forms fast-moving jets that agitate the mixture and boost combustion speeds.

Intake port volume usually isn’t regarded with as much importance as the smallest cross-sectional area, which accelerates air flow in the port. Might it produce its best results when located near the short-turn radius before the valve bowl? Or would it serve better, perhaps, if it were located around the pushrod area, giving the accelerating airflow the space to decelerate before it negotiates the valve-bowl turn, leading down toward the opening valve?

Successful race engine builders are especially observant and value accurate observations. For over twenty years the able young Stoa has kept his eyes riveted on the paraphernalia surrounding engine power and what makes the race engine work better. A double Supernationals winner, whose signature resource is thoroughness, knows not to become preoccupied with big power numbers. Instead he’s motivated by crisp throttle response and drivability and designs his induction ports accordingly. As he often says, “Because you are performing most of your passing maneuvers coming off the corner, having a big power number on the dyno rarely ensures the car will drive well on the race track.”

Here in this final part of the assembly of Stoa’s own 410cu in Dirt Modified race engine, we begin with the wet sump, proceed with the valve gear, and conclude with the break-in procedure and dyno test.

Wet-sump oiling systems are vastly inferior to their dry-sump counterparts. Aided by scavenge pumps, the dry sump arrangement removes the turbulent, whirling storm of hot, aerated oil that resides in the crankcase and in the oil pan and transfers it to a separate reservoir. In addition dry-sump systems usually incorporate a vacuum pump that creates negative pressure in the crankcase, allowing the rotating assembly and the reciprocating mass (the pistons) to operate in a tumult-free environment. If dry-sump oiling systems were permitted in Dirt Modified engines, which use a relatively long stroke, power output would likely increase by around 75 horsepower. Alas, only wet sumps are permitted in Dirt Modified, and overcoming their inherent inadequacies is a considerable achievement. “These wet-sump oil pans,” comments Stoa, “are designed for the G-forces of turning left. If you have to turn right—perhaps to exit the track by driving up the banking—it’s best to first drive down to the flat apron and then to make a wide sweeping turn up the banking to avoid the worrying flicker of the oil light.”

Similarly, today’s valve train components have overcome several long-suffering shortcomings. Happily they now run reliably for several seasons. But this has not always been true, particularly with pushrod construction.

Until the early nineteen-nineties little good was reported about racing pushrods: they weren’t straight, they varied in length, and, worse, their ends were susceptible to cracking around the oil holes. In Warren, Michigan, a little-known entrepreneur, Bob Fox, confronted these issues. Five years earlier, while working the phones as tech help at nearby Diamond Racing, he had spent hours wrestling with pushrod problems. But now with Trend Performance established, he had become a pushrod maker in his own right and was determined to blaze new trails. Devising procedures to straighten them and to produce them in consistent lengths were enacted quickly. To resolve the premature fracturing troubles on their radiused ends, he changed the system. By introducing a unique milling operation inside the ends of the pushrods, he succeeded in creating more material in the vital areas. Since then valve train reliability has improved significantly. Finally, the engine featured in this three-part Speedway Illustrated story was built and dyno-tested within a remarkable 24-hour period. By building these powerful, reliable race engines, you get the impression that everything has been done at KS Engineering to encourage the customer to come back. While observing it on the dynamometer, its most attractive feature was its crispness—it’s capacity to accelerate quickly. But then this is the essence of the Dirt Modified race engine and therein lies its beauty.