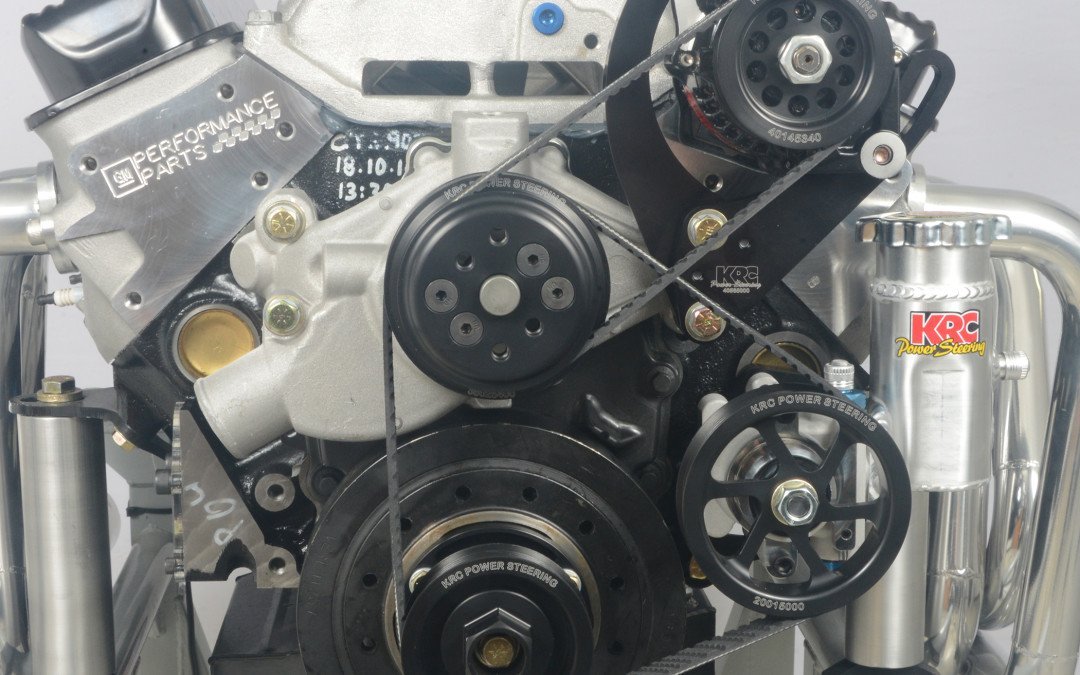 How to do it better and how some road racers could raise their game.

What’s much more useful, however, particularly for engine building shops, is being able to acquire pulley combinations—both accurately made and durable, off-the-shelf and onto the engine quickly. Shelf-stock availability is an invaluable resource.

Those prospects sound promising, right? They are. “Do you know how long it takes to organize this stuff in individual pieces,” says KRC’s Cody Haskins. “It’s longer than the average engine builder wants to mess with – and ‘half-shipped, half-on-back order’ is never a winning message.”

This is not a new area for Haskins. Head of the Kennesaw, Georgia, power steering and pulley company, he has been one of the largest belt and pulley suppliers in the country for years. “We have on the shelf,” he assures, “any combination of pulleys and belts an engine builder could conceive.” 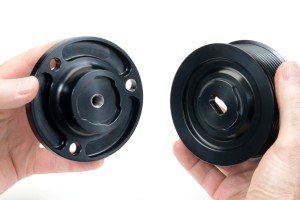 Among pulley talking points are their diameters and provisions for additional pulleys. Notably, Haskins’s pulleys feature their distinctive R-lok innovation, a convenient pulley interlocking mechanism. This means additional pulleys are stackable. Thus, adding a further pulley to the crank, for example, is straightforward. These are usually employed to drive an oil pump, or power steering pump, or alternator. Common crank pulley diameters include 2.5in., 2.75in., 3in., and 3.5in.

Of course, manufacturing a vast range of pulleys to form dozens of combinations is bound to disappoint without an equal number of drive belt types to complete the systems. Belt types include HTD, 6-rib serpentine belts and even V-belts. HTD refers to High Torque Drive belts, which are characterized by their rounded teeth in contrast to the square-shape teeth of the Gilmer belt.

To reduce water pump rotational speeds by 50 percent, a popular HTD combination is the introduction of a 20-tooth crank pulley combined with a 40-tooth water pump pulley.

Six-rib belts are available from 24 to 40 inches, mostly in 0.5in increments. Then, there’s the venerable V-belt that is favored for driving power steering pumps. Why? Because in a crisis they can slip. 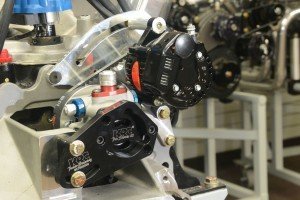 Let’s say you’re racing around a turn at 90mph and one of your front wheels makes contact with a curb or another vehicle, the resulting jolt can induce a shock loading through the power steering mechanism that momentarily pauses the pump. Often, this moment of pause is sufficient to shear the teeth off an HTD belt, resulting in power steering loss. This is the reason most circle track racers use V-belts to drive their power steering pumps. As mentioned above, V-belts slip. Take note road racers teams. 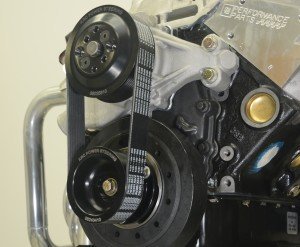 And then there is the rarefied ten-rib belt and pulley system—the innovation of a bright  mind. At 27.2 inches long and functioning with a pulley set, the 10-rib system was developed for Super Late Models and IMCA Modifieds. The belt, which is constructed using Kevlar cords, drives the water pump, operates without an idler pulley, provides 100 percent more surface contact than previously available, and ends excessive belt slippage during rapid deceleration, which usually occurs at least twice on each lap. Yes, it’s rare alright.

All of these pulleys are available from this manufacturer in black hard anodized or natural mill finish. Because wear rates accelerate on belts running on hot, uncoated aluminum surfaces—evidenced by aluminum embedded in the belt—black hard-anodizing is greatly favored.

Haskins, a life-long racer, demonstrates an intuitive grasp of the technical and an eye for the practical. Indeed, his vast, readily available inventory might be worth plundering!