Last Friday, one week ago, Jon Kaase’s 4-valve 409cu in Mod motor triumphed in the Engine Master’s Challenge in Lima, Ohio. On Saturday, in Cleveland, Ohio, he visited his 91-year-old father who advised him that the college in which he taught dentistry had closed, that he was unemployed, and that he was seeking work urgently! Three days later, on Tuesday of this week, Kaase celebrated his 61st birthday. Today we release news of his latest P-51 competition rockers. “They passed the scrutiny of their designer Wilfred Boutilier, he said, “so, they’re apt to be good.” To the competition valve train, it contributes both strength and accuracy. However, the new arrangement possesses many more appealing prospects, some of which are concealed.

For example, the 0.900in wide aluminum rocker bodies are characterized partly by their 1.650in pivotal length, but mostly by their twin needle bearings. The disadvantage of using a long, single needle bearing with canted valves is that, under high spring loads, the forces tend to skew the needles. As a consequence it drives them into the end of the bearing case and failure soon follows.

As usual, a stroke of genius intervened. Two short needle bearings were introduced: one 1/2in wide (installed on the trunnion’s loaded side), the other 3/8in. This layout provides a space of 0.025in between the bearings which is used to deliver lubricating oil via a hole in the top of the rocker—a feature not possible with a single bearing. When a solution passes the scrutiny of accomplished rocker specialist Wilfred Boutilier it is apt to be good. Successor to the traditional stud-mounted rocker, this new arrangement is also distinguished by its one-piece stand with integral cant angles, which accommodate the rockers operating the intake valves. The U-shape exhaust stands are individually formed and secured to the existing mounting pads of the cylinder heads.

To prevent the exhaust stands from rotating during assembly or in operation, they are angle-milled to four degrees on their back face. This formula ensures they lock against the adjacent face of the intake stand.

Though the popular rocker ratio of Kaase’s P-51 is 1.75:1, alternative ratios are available from 1.73:1 (original specification) to 1.80:1. Moreover, the rockers operate on a pivot shaft hardened to around 60Rc and because they are designed specifically for the P-51 racing heads they require no shimming—the rocker geometry is exact.

When Kaase first introduced the P-51 cylinder heads, he extended the valve stems by 0.100in compared with those of the Super Cobra Jet head, which he also designed. Of course, longer valves permit longer springs which, in this case, allow engine tuners to achieve valve openings of up to 0.800in., without the threat of valve springs reaching their coil-bound limits.

To most observers, the success of Kaase’s P-51 cylinder heads, which came to prominence around 2008, is often attributed to their unrivalled power for the money. Their induction ports possess abundant air flow and their combustion chambers with their intake valves moved closer to the ports, are efficient. But the big thing is they operate with standard intake and exhaust manifolds, which represent substantial savings for any Sportsman racer. 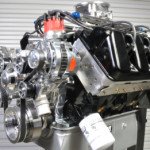