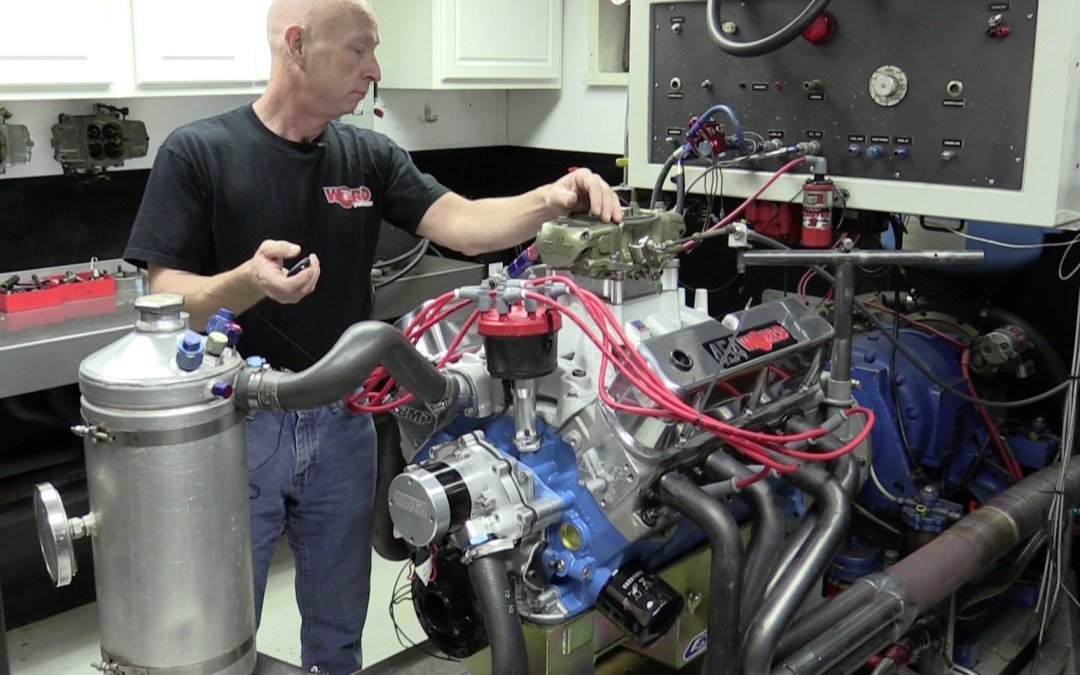 First, consider the time and treasure invested in its creation. Also, consider the enormity of the engineering details and the designer who tirelessly examined hundreds of complex regions of the new casting. It’s an endeavor not for the faint of heart.

But its culmination is exactly what we observed at the end of 2014 when, during the PRI exhibition in Indianapolis, World Products unveiled two innovative Ford-based blocks. Both defined as small-blocks they are distinguished mainly by their deck heights: one measures 8.2in., the other 9.5in.

The 9.5 version displayed in finished form sported a displacement of 454cu in (7.4L), exhibited a host of advantages, and echoed the biggest engine news of the show. It is called Man O’ War.

The Man O’ War block had existed previously, but when World Products was sold in late 2012 the new owners decided to entirely revise it. Now graced by new architecture and the brainchild of World’s Engineering Director, Dick Boyer, it accommodates the original 10-bolt cylinder heads as well as the latest aftermarket high-performance 18-bolt counterparts. Introducing six head bolts per cylinder combined with extra thick decks greatly reinforces gasket clamping. But its sporting credentials didn’t end there.

Devoted to the idea that the new engine should be the strongest and most rugged, Boyer, an accomplished race engine builder and tuner, cast the new power unit in a 40,000psi iron alloy. He also increased the thickness of the main bearing webs, upgrading the front one by adding 0.080in and the center three by 0.030in. To increase the main web structure further, the traditional 1/2in main cap fasteners were revised to 7/16in, leaving more material in the webs.

A replacement for both Ford’s 302 and the ubiquitous Windsor motor, World’s new block is therefore available in two deck heights 8.200in and 9.500in respectively. Deck heights have a direct bearing on the engine’s capacity. Shorter deck heights limit the stroke length and hence the engine’s cubic inch displacement.

The 8.200in block is a direct replacement for 5.0L Mustangs and is compati­ble with OEM heads and exhaust systems. The 9.500in block works with all 351 Windsor-style components. Both employ Siamese cylinder bores with thick walls, which can be bored to 4.200in.

Much to the blocks’ credit, the bottom of the cylinder barrels are extended down into the crankcase by 0.500in. This approach introduces superior piston support while operating with long-stroke crankshafts. In the case of the 8.200in deck blocks, clearance is provided for a 3.500in stroke crank while the 9.500in deck blocks accommodate a 4.250in stroke crank.

Either billet steel or nodular iron main caps are fitted. Featuring a splayed 4-bolt stepped and doweled register they incorporate ARP fasteners (bolts are used with the nodular caps, studs with the billet caps). In addition, priority-mains oiling system is featured, which delivers oil to the main bearings first, ensuring reliable lubrication at high rpm. To further improve main bearing lubrication prospects, the inadequacy of restrictive oil flow was overcome by enlarging the diameter of the main oil gallery and also the passage from the oil filter to the main gallery.

But perhaps Boyer’s real stroke of genius lies not only in combining 4.125in bore with 4.250in stroke, ensuring the engine would accommodate many off-the-shelf parts, but also in making it available as a complete package, if desired.

An entire kit of compatible components engineered and tested and proven simplifies construction, shortens build time and suppresses rising costs. Pushrods, for example, are supplied to the exact length and specification—so is everything else.

Introduced in 1962 by Ford as their engine replacement for the Y-block, the rated power and torque values of the early Windsor were stated as 145hp at 4,400rpm and 216lb ft at 2,200rpm. As it evolved over the next 40 years it, arguably, became Ford’s most successful competition engine. Now revitalized for 2015 in 454cu in configuration, Boyer has brought a fresh engineering richness to the concept. By combining the new block with World’s standard kit of parts, he generated 735hp during preliminary tests.

Finally, the blocks are semi-finished to 0.005in undersize to accommodate 4in and 4.125in piston and ring packs. Part numbers and details are as follows: