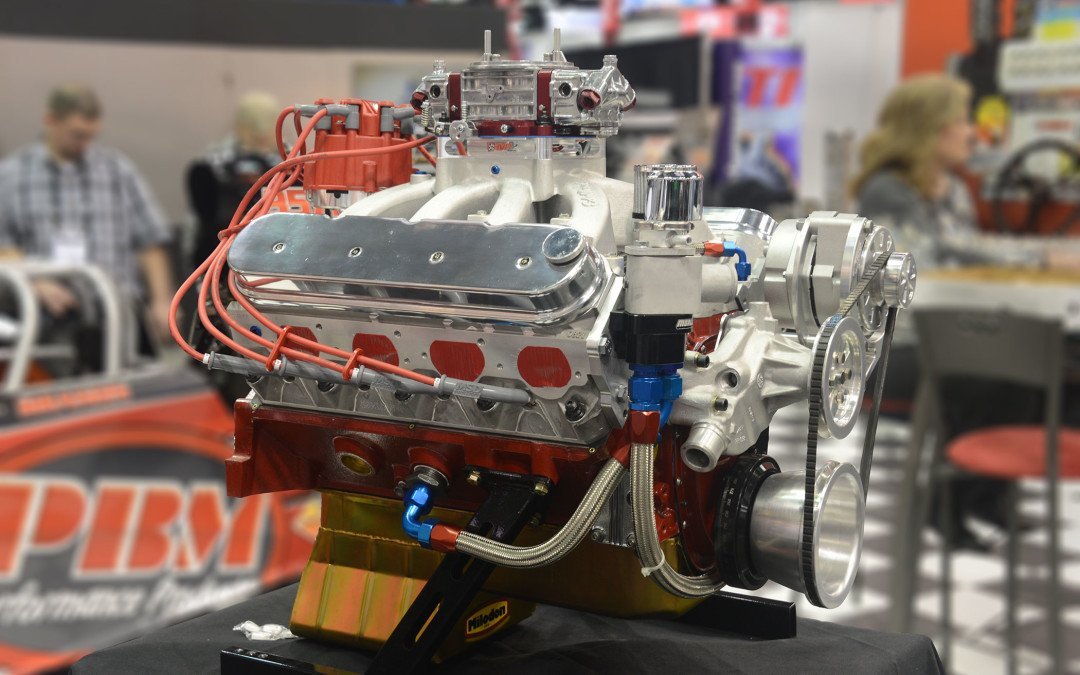 What’s the motivation for adapting LS cylinder heads to a small-block Chevrolet engine?

Why not just go out and buy a used LS-series? It’s a modern power unit; it’s bestowed with high flowing heads, it’s readily available and it’s affordable…all the benefits you could desire. Except there’s a catch—the inconvenient fact is there’s a ton of work required to get it installed properly, coupled to appreciable expenditures.

If you are empowering any pre-1990s Muscle car with an LS-series engine it is usually not a simple swap. And it’s not just exploring engine and transmission mounting solutions and clutch actuation, but there are EFI and ignition considerations, a fuel system design as well as numerous cooling and engine accessories questions to resolve. The fact is that mounting a pair of LS-series cylinder heads on a small-block is a much more practical solution. 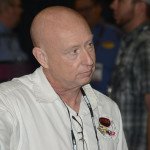 Dick Boyer, who early in his career earned a stellar reputation for his talents in circle track race engine preparation, unveiled the new Motown LS hybrid at the PRI show in Indianapolis, December 2015.

Likely, the most interesting new engine for 2016 will be the Motown LS. Under the insightful command of Dick Boyer, the architect of the last year’s 454 Man O’ War Ford block, World Products committed to foundry tooling expenses for the production of such a hybrid. It is unique.

Weighing 210lb and employing standard LS deck height, the Motown LS is a cast iron small-block that accepts LS-series cylinder heads. Boyer’s uncommon design made its first appearance in public at December’s PRI show. Available in two versions, a street-strip and a race variant, he had displayed the former although not yet tested. When tested the 427cu in engine generated just under 640hp at 6,400rpm. Not bad for a street-based engine. The drag race version uses higher compression ratio and a solid roller camshaft. In the interests of valve train stability, Boyer’s agile mind incorporated several other interesting attributes, including useful camshaft reforms.

Camshaft raised by just over one-eighth of an inch 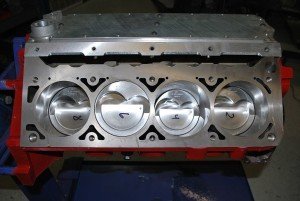 Valve reliefs in the piston crowns accommodate LS cylinder heads. The valley plate is secured when the deck is machined as the head gasket and cylinder head attaches to it.

When you install a crankshaft of 3.750in stroke or more in a small-block Chevrolet you run the risk of interference. The clearance between the connecting rod shoulder and bolt and the camshaft is usually dangerously close. When collision occurs it usually affects four lobes.

The usual solutions are to machine or grind sufficient clearance on the rod or adopt a small base-circle camshaft, which allows the rotation of a longer-stroke crankshaft.

But selecting a small base-circle cam raises other technical difficulties. The first of which is that it compromises camshaft rigidity, especially those with a cast core or austempered ductile iron (ADI) core. The second pertains to lobe distortion. Tests demonstrate that a camshaft ground on a 0.900in base circle deflects as much 0.003in compared to a 1.200in base circle that deflects less than 0.0005in. To complicate matters further there is the risk of lowering the lifter too far in its bore, which leads to inadequate oiling. Also, the greater operating angle between the cam lobe and lifter usually results in premature lifter bore wear. Conclusions? 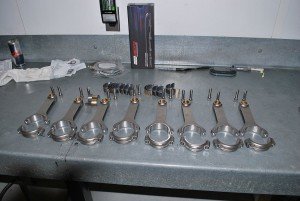 Dick Boyer’s solution was insightful, robust and well engineered. He raised the camshaft’s location in the block, which overcame the need for the small base circle. Furthermore, raising the camshaft by 0.134in allowed him to run a larger 55mm cam core, which is one of the chief power benefits of the LS engine platform. The 55mm cam core and its resulting larger base circle introduces a host of advantages not least, efficiencies in valve train stability. Race engine builders also pursue them for better lifter control. In addition, they are desirable for their ability to actuate quick, reliable valve openings. When an engine’s design is confined to a smaller base circle camshaft you forfeit a great many advantages.

Incidentally, these new custom cam cores are available through Erson Camshafts for the same price as the standard Chevrolet LS cam.

What’s the advantage of a crank with a 4in stroke? Well, more stroke length means more displacement, more cubic inches, and a 350 crankshaft with a four-inch stroke is commonly available for the small-block Chevrolet.

Are there any disadvantages? None of any significance: the raised camshaft requires a different gear set—comprising upper and lower gears of differing diameters with slightly longer timing chain. Importantly, the cam’s relocation has no effect on the timing cover, oil pan, oil pump or distributor ignition system—all of which remain standard. It’s also worth noting that Jesel has introduced an alternative belt-drive assembly to suit the new engine. 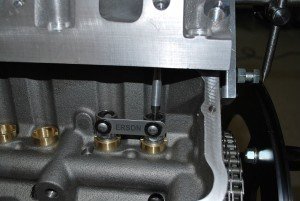 As a result of the larger diameter cam core and its raised position, bronze lifter bushings—either 0.842in or 0.904in—are employed to reposition the oil band. Note standard LS vertical tie-bar lifters.

Motown LS engine blocks, which use a standard LS vertical tie-bar lifter, are supplied with bronze lifter bushings of either 0.842in or 0.904in. The 0.842in has been the standard Chevrolet small-block lifter for decades but with the advent of roller lifters and increasing engine speeds, the larger 0.904in has gained popularity. Its chief advantage is that it promotes the use of a larger nose wheel on the lifter. As the diameter of the lifter increases so too can the diameter of the wheel. The larger diameter wheel promotes slower wheel rotation, which reduces the forces within the lifter wheel.

Naturally a priority-mains oiling system is included. This ensures reliable lubrication of the main bearings. In addition, the conventional small-block crankcase, sump and oil pan eliminate concerns associated with the turbulent crankcase environment and high RPM oiling that has somewhat tarnished the LS engine’s reputation. 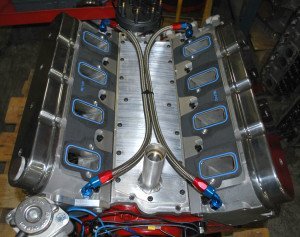 Delivered directly into the frontal area of each cylinder head via 3/4in passageways from the block, the colder coolant is also transferred to the heads’ rearmost regions by two -6AN braided hoses running under the intake manifold.

Another key innovation that defines the character of World’s Motown LS is its reverse cooling facility. In common with GM LS engine blocks and cylinder heads, the purpose of reverse flow is to distance the threat of detonation by introducing not only colder coolant into the heads, but also higher coolant pressures.

Delivered directly into the frontal area of each cylinder head via 3/4in passageways from the block, the colder coolant is also transferred to the heads’ rearmost regions by two -6AN braided hoses running under the intake manifold.

GM’s use of higher pressures within the coolant passages raises the boiling point. This is particularly advantageous around spark plugs and combustion chambers and is achieved simply by their use of smaller diameter transfer holes in the cylinder head gasket, which act as restrictors. 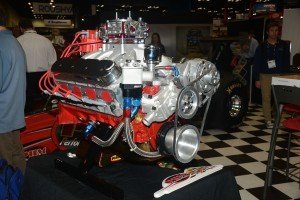 Reassuring origins break new ground: The only engine design that combines all the small-block provisions with the LS high-flowing cylinder heads, it is unique. Conceived for convenience, it brings LS technology to all pre 1990s chassis installations.

The convention with traditional cooling systems is to fill the radiator first, forcing the coolant into the block, which rises up and around the cylinders and into the cylinder heads, flowing out through the top hose and into the filled radiator.

In contrast, reverse-flow cooling is filled not through the radiator but through the thermostat housing, which is mounted above the coolant level in the cylinder head to avoid the introduction of air bubbles. From the thermostat housing, the coolant is transferred to the bottom of the block via -12AN braided lines and rises through the block to the cylinder heads. Then it travels down to the water pump and finally into the radiator. When the system is full the vents are cracked open on the -6AN transfer hoses that run under the intake manifold, allowing any remaining air bubbles to escape. 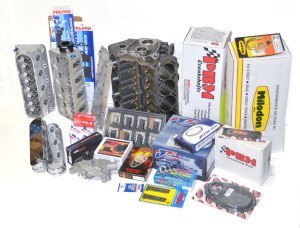 In common with last year’s introduction of their latest Man O’ War block, the Motown LS accommodates many off-the-shelf components. A standard LS 9.240in deck height, for example, means standard LS intake manifolds can be used.

In addition to World Products’ presence, who provides the blocks separately, their warehouse associate PBM offers the complete package, if desired.

Beyond this, the standard 4.120in bore finishes at 4.125in and 350 mains are available with a choice of ductile iron or billet steel splayed 4-bolt main caps. High quality ARP fasteners are used to further enhance reliability. Maximum bore size of the Motown LS is 4.185in.

Already in production and on sale this spring of 2016, the Motown LS is quite the achievement, but it only represents Boyer’s thinking at one moment in time. Soon his thoughts are concentrated on the next project—a lightweight competition small block. 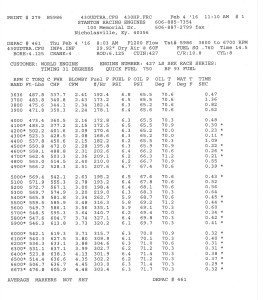 Part numbers for the Motown LS blocks are as follows: