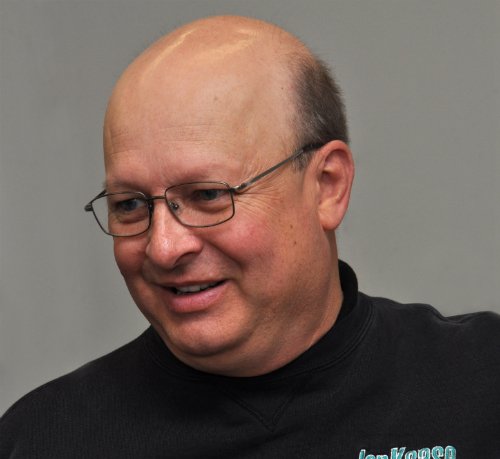 Jon Kaase’s standing was propelled to the forefront of his craft by winning the annual Engine Masters Challenge four times: 2003, ’04, ’08, and 09.

Today Kaase and his team continue to devote their time to building race engines and hot rod engines for all classes, including those with power-adders.

In the following paragraphs Jon Kaase provides some insight into his top five power-plants. From his high performance small-block P-38 Windsor engines to Mountain Motor Pro Stock racing units here are some of his comments: The real stroke of genius in the P-38 lies in extracting all its extra power while maintaining the intake and exhaust ports in their original positions. Thus it accommodates all original equipment and aftermarket intake manifolds and exhausts—no hacking or messing about required!

“The smallest one is the P-38,” says Jon. “These are cylinder heads that suit the 302 and 351 small-block Windsor engines. Initially, they attracted interest slowly, probably because our introduction was a protracted affair. But after six or nine months, sales began taking off, including many welcome orders from our Australian followers.

“Now the P-38 has caught the eye of high performance car makers. In fact, we’re about to release a new shaft-style rocker layout and a revised valve cover.”

By canting the P-38s valves, particularly the intake, they open toward the center of the cylinder. Hence the gases flow better as they are less impeded by the proximity of the cylinder wall. Also, intake and exhaust valves are increased in diameter to 2.100in and 1.600in respectively.

The principal power gains from Kaase’s P-38, you may recall, were derived from its canted, larger diameter inlet and exhaust valves and improved port velocities. Deeper valve bowls with sweeping short turns in the intake and exhaust tracts were further key upgrades that set it apart.

But the real stroke of genius lies in extracting the extra power the P-38 readily demonstrates while holding the intake and exhaust ports in their original positions. Thus it accommodates the original equipment and aftermarket intake manifolds and exhausts. Build with the best components available the cost of Kaase’s P-38 starts at $17,000 including carburettor. This road race fuel injected Boss Nine operates with a concealed plenum. An innovation that equalizes air-fuel distribution to the cylinders it also empowers the MAP sensor that controls the fuel injection system, reflecting throttle position, engine revs, temperature and so on.

Unlike the P-38’s quiet beginnings the Boss Nine cylinder heads enjoyed meteoric success from their launch in 2007. “At any given time,” concedes Kaase, “there are usually ten or a dozen Boss Nines on order or in the process of being built. The most popular displacement is 520cu in because it’s the most cost-effective model to build.

Invariably these engines operate on the street and though some generate over 1,000hp, most enthusiasts request more moderate power outputs, usually between 450hp and 750hp.”

Engineered to fit Ford’s 385 series—the venerable 429-460cu-in big-blocks—Kaase’s Boss Nine cylinder heads display a distinguished hemispherical form. A spark plug enters through the middle of the head and is positioned onto one side of it vaulted chamber.

Boss Nines that generate up to 700hp are equipped with hydraulic roller camshafts and followers. Adopting lighter valve spring pressures, the hydraulic roller arrangement is gentle on the valve train and completely eliminates lash adjustments. Hence they are maintenance-free. For the most part, they operate on 93-octane pump fuel, and therefore compression ratios are maintained around 10:1, usually 9.8:1. Beyond this power output a solid roller camshaft and attendant valve gear are necessary. Carburettor versions of the Boss Nine start at $21,500. A 572cu-in P-51 produces over 900hp with a single carburetor without additional porting. Even a 520cu-in motor generates well over 800hp. More appealing still, perhaps, is the fact that it fits any engine bay that accommodated a 460 big-block and, most importantly, it doesn’t break the bank!

Though some P-51 engines are driven on the street, most of them are exploited in drag racing. Bracket racing suits their use. So does entry-level Sportsman—though not Top Sportsman, but rather budget-minded racers wishing to build an engine with over 800hp without breaking the bank.

“The big advantage of the P-51,” Kaase explains, “is its convenience. It fits any regular passenger car that came with a 385-series engine and it accepts store-bought exhausts and headers. Other premium race heads like Ford’s C-460 or Trickflow’s A460 won’t fit in the engine bay, especially on older Mustangs where the exhaust headers interfere with the shock towers.

“Additionally, you don’t have to spend a lot of money porting it. A 572cu-in engine with P-51 heads produces over 900 hp with a single carburetor without porting the intake or the heads. And a 520cu-in motor makes well over 800hp. They represent an easy build and for years they have been a runaway best seller—there are a great many out there running well.”

Compression ratios, which vary widely from 13:1 and 14:1 down to 9:1 for street driven vehicles, are accommodated by piston design. Though the heads remain unchanged, the pistons can vary from dome tops to flat-tops to dished style, depending upon compression requirements.

Displacements are mostly 520ci to 598ci and the engines are usually constructed upon the original, robust cast-iron block, although they are available with an aluminium block.

But it’s the economics that has had such a profound effect on P-51 sales. The heads cost only $2,550 complete, much to the appreciation of the budget-minded racer. In fact, Kaase’s P-51 finished engine with 4-bolt main caps, single carburettor, dynoed, and ready to run costs no more than $17,500. Used by fast Bracket and Top Sportsman racers, the A460 runs mid- to low-6 seconds over the quarter mile and low 4s in the 1/8mile. Top Sportsman is often defined as drag racing at over 200mph.

“There is a place for 1,200-horse motors,” contends Kaase, “and these are pretty racy engines when we’re done with them. These are used by Sportsman racers and we’ve built a lot of them as there are a lot more Sportsman racers than there are professionals. The Ford people tell us we are their biggest customer for their A460 cast iron blocks.”

Adopting a billet crank and billet connecting rods and all premium components these racing blocks with C460 cylinder heads typically generate 1,150hp with a single carburetor and 1,300hp with two carburetors and a sheet metal intake. With power adders, however, they produce a lot more—typically 1,600hp but can sustain up 3,000hp.

Used in fast Bracket cars or Top Sportsman (often former Pro Stock cars) or Outlaw 10.5 race cars, the A460 is superior to the original 385-series by virtue of the fact that the block is stronger and consequently heavier. Screw-in freeze plugs and the option of using 18-bolt cylinder heads (instead of the conventional 10-bolt arrangement) are the only visual differences between the 460 and the original 385 series. In common with the P-51 the A460 is available with an aluminium block. To reduce camshaft deflection the billet block has provision for nine cam bearing journals instead of the usual five. It also allows the convenience of adding extra mounting bosses where needed and more importantly the easy selection of deck heights and bore spacing.

Greater bore spacing permits larger bores and bigger valves. Customarily bore centers start at 4.9 inches, which is standard for 429/460cu-in engines, and increase to 5.0in and, indeed, up to 5.3in.accompanied with special cylinder heads. Commonly, Pro Mod race engines and Truck Pullers use 5in centers. However, none of the operating parts of the billet block (crankshaft, belt-drive and so on) are interchangeable with the 460. This concludes Kaase’s Top Five. 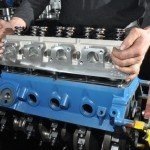