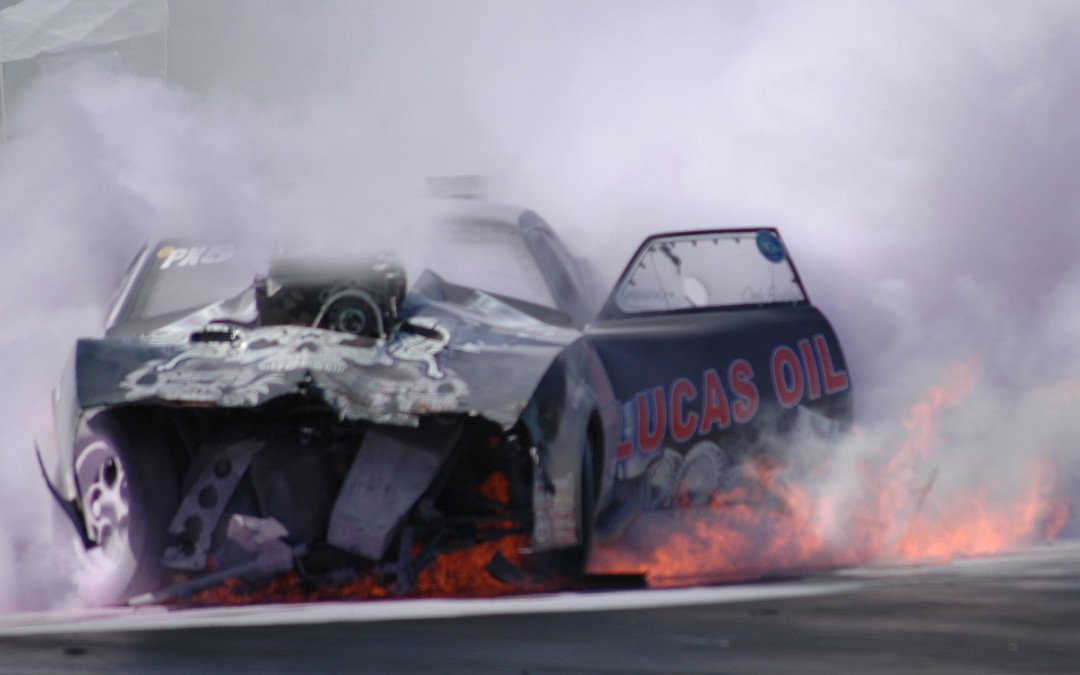 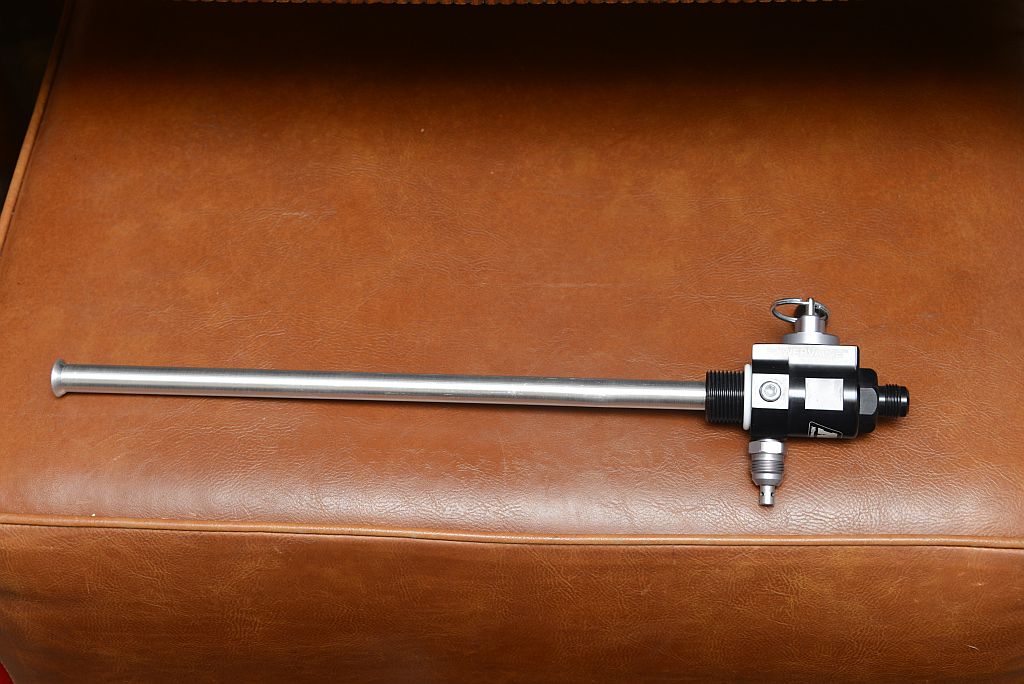 The long 5/8in OD supply tube extends down into the nitrous oxide cylinder, its flared end reaching within 5/8in of the cylinder floor. Like a velocity stack the 45-degree flare is formed because fluids or air don’t react well to deviating more than 15 degrees says Nitrous Supply’s Mike Flynn. “If we left it squared-off, the flow in the tube would be adversely affected”. Their valve, he claims, has the highest flow of any valve you can put in a nitrous bottle, so forming the bell mouth at its entry helps smooth the flow and uses the full capacity of the tube. 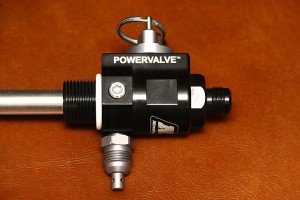 On one side of the bottle valve a pressure relief device is positioned. Sometimes known as the racers’ safety valve, it is an emergency mechanism that vents dangerously high-pressure gases into a tube through its nozzle end. Set to deploy should the cylinder pressure escalate to 2700psi, the vent tube, which is connected to the safety device by a -8AN fitting, is routed outside the vehicle. 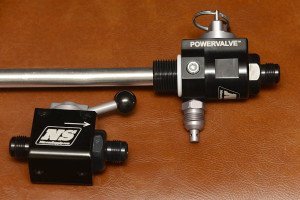 Recently, the nozzle of the safety device has evolved and now features four 3/32in holes rather than one large hole. The four holes act as an effective diffuser should pressure build and activate the emergency relief mechanism. In dire circumstances, one hole can be potentially dangerous suggests, Mike Flynn. What would cause the pressure relief device to deploy you might ask? Well, overfilling the bottle could activate it or exposing an overfull bottle to heat.

On the other side of Nitrous Supply’s bottle valve, a stainless steel pin emerges from the internals. It is connected to an external stainless steel ring. The pin locks the valve in the closed position and a gloved finger can open it by pulling outwards on the ring and rotating it to the open position. This two-stage action allows the nitrous oxide to flow and charge the feed line up to the solenoids. When it’s rotated to the closed position the spring-loaded pin snaps back.

A secondary valve is employed as an emergency shut-off valve. This is now mandated by several sanctioning bodies associated with fast nitrous race cars. It’s an inline master valve that closes the flow of nitrous and it’s placed in the cockpit within easy reach of the driver, between the nitrous cylinder and the solenoids.

In the event of an accident, particularly if fire erupts, this valve can be closed instantly by a quarter-turn of the valve’s top lever. Keep in mind that if the hose burns through and causes a nitrous leak, the resulting proximity of oxygen fans the flames until the nitrous oxide is consumed. A quarter turn can save the day!

He begins: It was the same sound you hear when you pour too much lighter fluid on the charcoal as you’re preparing a Fourth of July barbecue. A giant “whoosh” followed by a flash of flame.

Except it was a thousand times louder. And it wasn’t charcoal that was on fire. It was me.

On February 13, 2016, I was driving an 8-hour sports car endurance race at the Circuit of the Americas near Austin, Texas. I started inside row 8 and quickly realized that our car was very fast. Within just a few laps we were in the top ten and I had high hopes of scoring my fourth straight endurance racing victory, a personal record.

On COTA’s massive back straightaway, the fastest point on the course, I smelled fuel and felt a cold spray over my right hand and leg. There was a sudden flash and my whole world turned a bright, terrifying orange. Everything was on fire.

Flames poured through every crack in the firewall. My right hand was on fire. Splashed with fuel, my right leg was burning as well. Even the inside of the cockpit was ablaze as fuel vapor ignited and literally set the air on fire. I could see nothing. I could not steer the car off the track because I couldn’t see the track.

I stomped the brake as hard as I could, but it takes a while to get a Porsche from 125 miles per hour to a dead stop.

In a desperate effort to see, I foolishly raised the visor on my helmet as the car slowed down. It worked. A little. I found the fire extinguisher switch but by this time it was useless. The intensity of the heat was indescribable. I abandoned any thought of doing anything but getting out of the car as quickly as possible.

Only then did I regret not practicing my egress from the car. Yes, I’d gone through the protocols in my mind, but nothing replaces actually practicing a full egress. And I hadn’t. This was my first time driving this race car and I had practiced nothing.

Now, as my leg, face and arm continued to burn, I had one dominant thought in my head… “I’ve got five more seconds. Maybe ten. If anything goes wrong with my egress, I’m going to die.”

I was gripped with an overwhelming urge to panic and slap out the flames on my arm and leg. But I knew that doing so would have been fatal. I had to ignore the pain and let them burn. Getting out of the car was primary and I had to focus on that job alone.

I blindly groped for the safety latch on my harness. I found it and my belts came loose instantly and cleanly. During this brief moment I distinctly recall watching the seams on my racing suit burn and finally split open. It had held up well, but couldn’t take any more. The Nomex underwear beneath it burned through and I could see the flesh on my leg catch fire.

I looked for the release catch on the window net. It was painted bright red and easy to find. I grabbed the lever, pulled it back and threw the net out the window. There was a black hole on the back of my right glove where the fire had burned through. Flames still licked around the edges.

I didn’t bother unplugging the radio cord from my helmet. With enough pressure it would break free on its own. I didn’t remove the steering wheel.

Still burning, I clambered out of the car and the upper half of my body fell free, while my feet were pinned under the steering wheel. Through the pain I remember yelling, “God, help me!” about twenty times in a row. I wasn’t cursing. I was praying. I actually needed His help. After a few seconds of wriggling I was completely clear of the race car, which by this time was consumed in flames six feet high.

Instinctively, I began rolling on the pavement and in ten seconds or so had managed to extinguish the flames on my body. Then I got up, staggered off the track to the grass, and collapsed.

The EMT’s arrived in record time. They removed my helmet, then pulled my gloves off. Despite their best efforts, I watched in horror as the skin on the back of my right thumb dripped off my hand.

“We can’t move him,” one of them said. I was in shock, but I remember the other responding, “We have to. This car’s gonna blow any second.” With that, they grabbed me by the arms and dragged me like a sack of potatoes another thirty feet away from the race car, which was entirely engulfed in flames and emitting a plume of black smoke high into the sky.

They gently put me into the ambulance and began cutting off my fire suit. The EMT’s were professional, compassionate and good at their jobs. I wondered how serious my injuries were. When I heard the engine of the lifeline helicopter warming up five minutes later, I knew.

The medical personnel in the helicopter were equally professional. The EMT attending me during the flight, a red-headed woman in her thirties, was fiddling with a big syringe undoubtedly meant for me. Barely able to speak through my burned throat, I grabbed her hand. She leaned over and asked me if I needed anything. “Yes,” I said. “I need you to look at me and tell me I’m going to be alright.”

She stopped her work long enough to look dead into my eyes and promise me that I was going to be fine. Then she told me that we were about to land, and picked up the syringe again.

My world went black and I remember nothing of the next 46 hours.

First, second and third degree burns covered 7% of my body. The worst injuries were to my face, my right arm and my right leg. I was transported to the Brooke Army Medical Center in San Antonio, where I spent the next three days in intensive care followed by six more in the burn recovery unit. My doctor later told me that the injuries were “considered very life threatening” for the first 24 hours, but a full recovery is expected now.

That’s my story. In my next blog, I’ll tell you what I learned from it and what I’ll do differently before I return to racing. 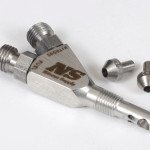