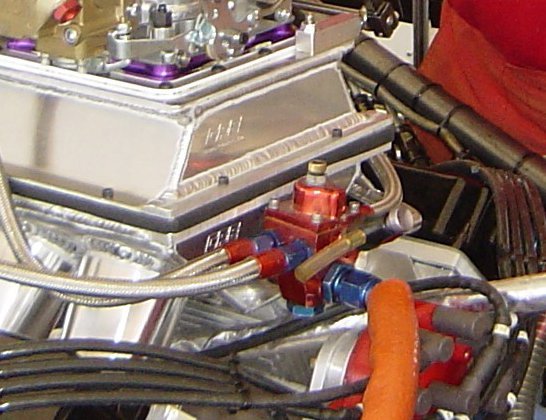 It’s not generally known that carburetor calibration is often dependent on the fuel pressure that enters the fuel bowl.

What Demon found when it upgraded its regulators Initially, the work was necessary because of extra pumping performance they extracted from their fuel pumps: the 400, the 280, the 220 Hot Road, and the 220PS. Moreover, the pumps’ materials were altered to accept a greater variety of fuels, which included gasoline, racing fuels, methanol, ethanol, diesel, and so on. As a consequence the original materials used in the regulators and filters had to be altered accordingly.

But now we get to the really good bit

To address the pumps’ increased flow rates Demon purchased the “Best-in-Class” regulators available on the market. They then used those targets as benchmarks for their regulators, which are formerly the BG 2- and 4-port designs as well as the original BG diaphragm-bypass breed. The first priority was to increase the diaphragm’s effective area in all of the regulators to make them more sensitive to fuel pressure variations. Because the new diaphragms increased in size slightly, slight expansion in body sizes were needed. This provided the perfect opportunity to include some porting refinements. To support increases in flow capacity, the spring rates were softened and the entire billet aluminum regulator bodies were hard-coat anodized to protect them from any adverse effects of fuel erosion.

Still, the contours and the original appearance remain largely unchanged although these modifications meant the regulators’ performance could now match those of the pumps. Another interesting factor is that the threads of the inlet and outlet ports are no longer pipe thread but instead larger AN fittings, thereby accommodating greater flow volumes. Easily the most intractable problem with regulators is the vexing issue of their mounting position. For decades, Demon technical staff implored their customers to ignore the hundreds of magazine pictures of regulators mounted on firewalls or inner fenders and instead to suspend them close to the carburetor. This simple measure greatly minimizes the response time between the regulator and carburetor and promotes top performance.