How the racing slick was born “Everything we learned in drag racing we learned the hard way. We tried to fix everything and sometimes it was through loss of life.” Tom “Mongoose” McEwen

When Tom “the Mongoose” McEwen, now 76, speaks of racing you are often struck by his power of recall and his perceptiveness, which is never more apparent than when he gets on the subject of race tire development.

“The only reason we have tread on a tire,” says McEwen, “is to allow us to drive in the rain. As drag racing isn’t conducted in the rain, we would put our tires in a lathe in the early days, back in the 1950s, and we’d cut off the tread in an effort to put more rubber on the track.”

Though shaving off the tread gave the early racers greater contact area it also created a problem: the rubber between the bottom of the treads and the top of the cords wasn’t always consistent. Invariably it was much too hard.

Then in the mid-nineteen-fifties, a company called Bite by Bruce who produced recap tires in Arizona for road vehicles and represented by a most menacing logo, introduced the first tire with a slick surface. According to “Mongoose” McEwen, these recaps represented the origins of the modern racing slick tire.

“In the old days before the practice of burnouts,” McEwen recalled, “when the cars approached the starting line, mechanics would soak rags in gasoline and wipe them around the circumference of the slicks in an attempt to soften the rubber and thus make the tire grip better.” Then in 1957 in Watertown, Massachusetts, Marvin Rifchin with his father Harry of M&H introduced the first dedicated racing slicks. Initially these offered less than seven inches of tractive width. In due course, though, they increased the contact area and offered different compounds.

Why no traction in middle of tire?

For McEwen, though, it was the shoulders of the tires that had become his focal point. The one thing conspicuously missing was traction from the middle part of the tire. Launch marks at the drag strip revealed only the tire’s outside edges were working. The shoulders were the strongest parts of the early slicks and their square profile, he felt, needed some re-thinking.

Marvin Rifchin’s first response was to use a tire grooving iron on the outside of the shoulders—on the sidewalls about 3/8in to 1/2in away from the slick surface—allowing the outside edge of each shoulder to collapse. If they needed a rounder profile on the slick surface, as the “Mongoose” had suggested, they better be certain his theory has merit as creating a new tire mold was an expense not undertaken lightly.

McEwen bounced back and forth between Goodyear and M&H, working closely with both. Though he succeeded in persuading Goodyear first to create a slight crown on the tire’s traction surface, his relationships with the Rifchin’s and Goodyear’s Bob Shaffer never faltered.

But as traction improved the tire beads began slipping on the steel wheels. “We sandblasted the inner rims,” recalls McEwen, “we glued them, we used inner liners—we even screwed the tires to the steel wheels. Our sport is about traction. It doesn’t matter how much horsepower you have if you cannot transmit it to the ground it’s futile.” This final act of trial and error was one of immense significance, leading to today’s practice of clamping racing slicks to wheels using bead locks. By adding more screws, the bead locks continued to improve, despite increasing power output and wheel and tire sizes.

Next month read Part II of “How the slick was born.” 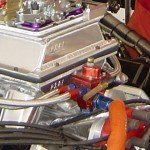