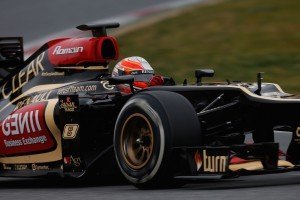 At the end of the last century, probably the autumn of 1999, senior R&D man at Renault F1, Dave Hamer, was asked to investigate what could be done to stabilize their wind tunnel model. At that time it was a half-scale model, fifty percent the size of their current Formula One car, and it had a tendency to yaw (move laterally) during wind tunnel testing. Could a mass damper stabilize the model in the wind tunnel?

To oppose or eradicate the oscillating forces, he suggested the use of a tuneable mass damper, similar in concept of those placed at the top of some skyscrapers to protect them from the effects of earthquakes. The Taipei 101 skyscraper uses a tuned mass damper that weighs 800 tons.

“We hired a specialist company to conduct a stability analysis of the model,” said Hamer, “and our drawing office designed some devices, but with negligible results. Confined space within the model was the chief impediment.”

Then four and a half years later, in 2004, another attempt was made. By now the wind tunnel and the work performed within it was more refined. Significantly, the R&D department had access to a vibration specialist, who was on loan from Renault at the time, and between him and Benetton’s then Head of the race team’s R&D department, Robin Tuluie, they introduced a leaf spring to address the instability of the wind tunnel model. By fixing a mass to one end of the spring, coating its leaves with a damping material, placing it on its side within the model, and securing the other end to the model’s spine, they resolved the problem. As the mass moved sideways, it could be tuned to counteract yaw motion. Stability was restored. Inevitably, Technical director Bob Bell asked Tuluie if there was an application for this type of system on the car. Back in their R&D department, the thought was that a tuned mass damper may cure a troubling pitch mode that unsettled it.

The pitch mode had been nicknamed “the crocodile”, as the front of the car bounced up and down as it rotated about the rear wheels. It was perpetuated by extreme front spring stiffness, which was used to combat powerful aerodynamic down forces and also to keep the front wing as low as possible at all times. Pitch was measured around 8Hz (8 cycles per second) on the team’s seven-post rig.

A hydraulic-powered computer-control vehicle testing and simulation machine, the seven-post shaker rig is used to perform load analysis on race cars. By applying shaking forces, it can emulate pitch mode as well as banking loads, lateral load transfer, longitudinal weight transfer, and ride height-sensitive downforce. More notably still, it can be programmed to simulate the surface of each specific racetrack.

Applying the new device for the first time Once the idea had taken hold, it didn’t take long to create a bigger, ad hoc version of the mass damper. It was installed in the nose of the rig car, and by using a replay of the Silverstone race track on the shaker rig, they knew they’d uncovered a decisive advantage. The effect was profound: the 8Hz pitch mode was largely cancelled, and a proper device was designed and produced that could be tested on the track.

Using Robin Tuluie’s talents for simulation modelling, the design office constructed a circular carbon container about 12 inches tall and 10 inches in diameter. Inside was a central vertical shaft upon which a linear ball bearing operated. This bearing was fixed within an annular ring (like a thick discus), which represented the mass. The mass was held at mid-height by a compression spring on either side, so it could freely oscillate up and down.

“But the clever part,” says Hamer, “was that the ring was a close fit to the sides of the container and, as such, used the air movement as the damping medium. When we tested the device on the 7-post rig, we estimated its advantage to be worth about ¼ second a lap at Silverstone.”  In the preserve of Formula 1, this was significant and due entirely to the improved mechanical grip, as the variation in tire-contact-patch force was reduced.

But to confirm the true scale of the achievement they had to wait for a track test. Unsurprisingly, the sense of eagerness within the R&D department was not universal; numerous team members had their misgivings. “Nonetheless, when Fernando Alonso tested the device at Silverstone,” recalled Hamer, “he confirmed our findings and insisted we have it ready to run at the next race. This was not a trivial task, as we had to resubmit the nose for an FIA crash test. Ultimately, all was well and Fernando went on to win that year’s (2005) championship.”

“Unavoidably, the device was quickly copied by other teams,” declared Hamer, “including Ferrari, who struggled to make it work properly. We, however, found it profoundly effective; we had the choice of a 5kg, 7.5kg or 10kg (22lbs) mass.  For each race track we would adopt the optimum mass required for that track, something I doubt the other teams did. We even had a second tuned mass damper fitted in the bell housing. Alonso marveled at the car’s agility over the kerbs.

“Each unit was tested to observe its natural frequency and damping; it was tuned by altering the spring rate. As mentioned, the optimum mass was determined by testing each unit on the 7-post rig for every track we raced on. Consequently, its effect improved the car’s mechanical grip, and we could convert grip gain into lap time. So, an incorrect mass would result in a slower time.

“As you can guess, its benefits were extensive. As we were compelled to carry ballast anyway, it gave us a performance advantage for free. Meantime we experimented with lead shot damping. Using the Silverstone lap replay, this was about half as effective as our air-damped TMD.”

After the Renault F1 team claimed the 2005 World title, the FIA–the sport’s governing body who had declared the tuned mass damper legal–unfathomably banned the system during the latter stages of the 2006 championship. On the occasion of its banning, opinions ranged from concern to outrage.

Read more on how Hamer and his associates developed Benetton’s Active Suspension system.