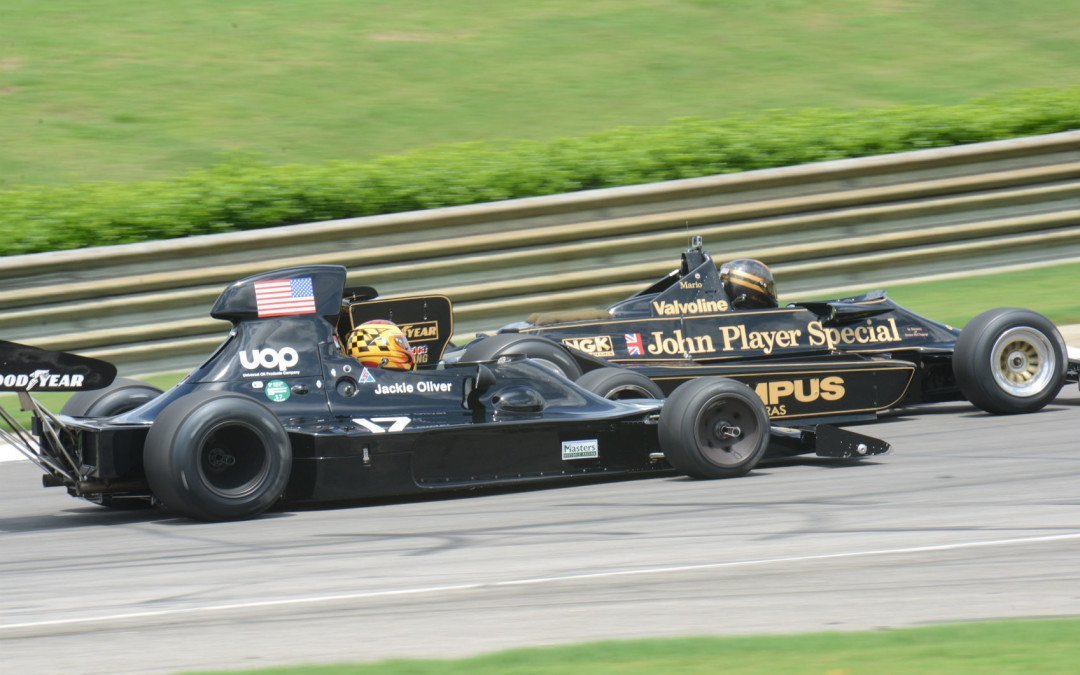 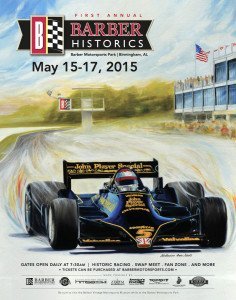 Katherine Anne Hicks, the illustrator for the poster of Barber’s first Historics event, resides in Birmingham, Alabama. She is also the artist behind the collection of posters for Barber’s Vintage Motorcycle events held every October. If interested in commissioning a painting of your race car or motorcycle, contact Anne at: katherineannehicks@icloud.com

Birmingham, Alabama: Barber Motorsports Park hosted their first annual Historic motorsports three-day event May 15-17, 2015. And if they do for Historic road racing cars what they did for vintage motorcycles, they’ll have 80,000 attendees in 10 years’ time.

Though the premiere event weekend, which was organized by the Historic Motor Sports Association (HMSA), attracted modest numbers of vintage racecars, around 70, it was an excellent first step. The sights, sounds and speeds, particularly of rare Formula One cars from the nineteen-sixties, -seventies and -eighties were glorious. Like Barber’s annual motorcycle Vintage Festival, held each October, a treasure trove of nostalgia was spread before us, all very accessible, informal and agreeable.

Located in Leeds to the east of Birmingham and a short distance off I-20, which is the main thoroughfare from Atlanta to Birmingham, Barber Motorsports Park is situated in a unique 740-acre parkland setting. Surrounding the race track a two-lane asphalt ring-road accommodates a tram service that transports visitors to all areas of interest.

The centerpiece of the weekend was the 16-race program and the featured marque was Lotus—well-known to George Barber with over fifty vintage machines of his own residing in the museum, adjacent to the track at Turn Nine.

Eddie Lawson, a former 4-time 500cc World motorcycle champion and now driving the 1977 Wolf WR4 of Canadian, Maurice McCaig, set the standard. Fastest in qualifying, he won both of the weekend’s F1 races. On Friday’s qualifying sessions Lawson was followed by James Hagan in a 1983 Tyrrell 001 (in full Benetton livery) and Doc Bundy in the 1978 JPS Lotus 79.

On Saturday, Lawson (57) again topped the qualifying order and won the first race shortly afterward, ahead of Europeans Andrew Beaumont in a Lotus 76 and James Hagan.

With temperatures and humidity in the eighties, Sunday’s race saw Bundy touch wheels with Hagan as they dived down into Charlotte’s Web hairpin, putting both of them in retirement. Nick Colyvas’ Tyrrell and Canadian Keith Frieser’s 1973 Shadow DN1 placed second and third.

Lawson, who recorded the fastest lap of the weekend, looked inch-perfect and sets a high standard for the Historics F1 brigade. His Wolf WR4 is prepared by John Anderson Racing Services of Sonoma, California.

Former F1 and Indy car driver George Follmer acted as the Grand Marshall. In 1972 Follmer was the only driver ever to win both the Trans-Am and Can-Am series championships, winning nine of 14 races, taking three pole positions and setting five lap records. In 1972 in the Roy Woods Javelin, Follmer claimed four wins from six starts.

But the Barber Historics isn’t about the races and racing personalities only, there are track parades for those eager to tour the 17-turn 2.3-mile race circuit and an auto jumble (swap meet) and lots of opportunities to soak-up southern hospitality. A Barber-Que competition, which featured chicken, pork ribs and pork started at 8am Saturday with judging from noon to 1pm.

Significantly, the HMSA invited the Masters Race Series to participate, which is a series for 3-liter Cosworth-powered F1 cars produced from 1966 to 1985. Presented in their period livery it’s a compelling concept that evokes a bygone era that attracted young able racecar designers at a time when wind tunnel science was in its infancy and energy drinks were unheard of.

The remainder of this year’s US events under Masters sanctioning will be as follows: Road America, Wisconsin, July 16-19; Monterey, California, August 13-16; Sonoma Raceway, California, Oct 2-4; and Austin, Texas, Oct 23-25. Beyond this is the superb Canadian Mont Tremblant event in Quebec scheduled for July 10-12.

The HMSA, whose goal is to race and preserve cars as they ran in period, promotes 10-12 events per year in North America with their strongest concentration in California. 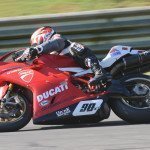 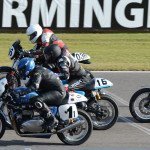