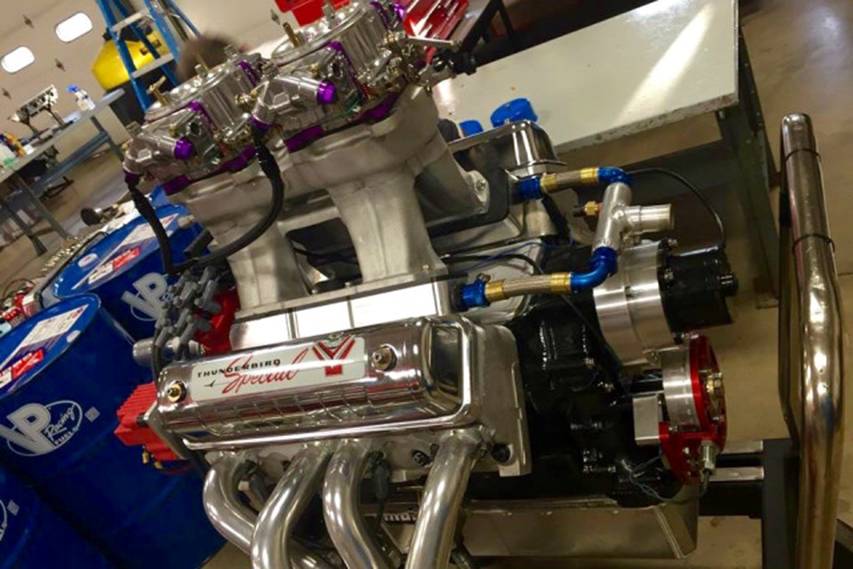 Winder Georgia: Jon Kaase, winner of Thursday’s Vintage class in this year’s Engine Masters Challenge at the University of Northwestern  Ohio in Lima, has proposed that the perennial three top performing teams, Bischoff Engine Services, School of Automotive Machinists and Jon Kaase Racing Engines, should be sequestered in the same class and all three should compete using the same engine make and model.

In so doing, engine shops could enter the contest without butting heads with them—unless they wanted to—and “to make it more interesting,” said Kaase, “we should consider selecting an engine that’s unknown to us—maybe a Flathead V8 or a Buick or similar.”

In this year’s EMC, rules had been dramatically altered to the delight of some and the disquiet of others. In the changes, the Challenge had been elevated from a one-class contest, where winner took all, to include five classes—one for each day of competition. Accordingly, Monday was devoted to the Mopar Hemi; Tuesday, Spec Small-Block; Wednesday, GM LS; Thursday, Vintage; and Friday, Big-block.

Needless to say, the advantage of the new rules soon became obvious: about half of the competitors entered were rewarded with money—$12,000 and $3,000 for each winner and each runner-up respectively. Also, peak horsepower and peak torque were worth a further $2,000; that is $1,000 for each category. In addition, with the increased number of winning engines as well as their broad diversity, the magazines could run significantly more feature articles about them than in the past.

Chris Thomas of the Almost Kaase team won the Spec Small Block category with a 400cu in Cleveland. Spec refers to part numbers that are specified and must be used in the engine’s build. These include cylinder heads, intake manifold, distributor, and tappets, even the headers were strictly controlled. Engine displacement was limited to 415cu in. and use of hydraulic flat tappets was mandatory.

The twenty-eight year old Thomas, who spent a couple of months of evenings and weekends on his build, defeated his closest rival by 30 points. “It was Randy Malick’s Windsor Ford,” he said, “with one of the best Windsors I’ve seen.” He made as much peak power and torque as I did, he was just a little short on the bottom end.” Engine pulls were recorded between 3,500 and 6,800rpm.

Although the most memorable moment of the 2015 EMC competition occurred when Dave Storlien’s LS entry exploded in flames, both first and second places in the LS category were carried by the School of Automotive Machinists from Houston, Texas. 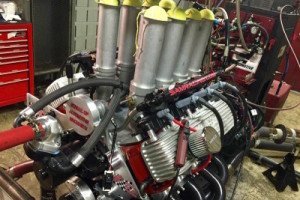 In this, a class that was largely unlimited, Jon Kaase entered a 400cu in Ford Y-block with a Tunnel Ram and two carburetors. His long-time rival, the School of Automotive Machinists entered a 402cu in Chrysler Polyspherical with stack fuel injection. This is an engine that originates from the mid-1950s and resembles Chrysler’s Hemi engine of the same era but isn’t related to it.

The average power for the Vintage class was calculated from 3,000rpm to 6,000rpm and Kaase placed his emphasis on generating abundant low-end power  rather than having it in the upper rev range. In the final analyses, his Y-Block, which produced 580hp and 596lbs ft torque, finished around 100 points ahead. “I had the advantage of having access to aluminum heads,” admitted Kaase. In contrast the Poly engine is limited to cast iron heads. “When tuning cast-iron heads I find they are harder to weld and seal” he conceded. ”Epoxy, for example, doesn’t adhere to cast iron as well as to aluminum.”

On the final day of competition, Michael Semchee of Semco Performance won the big-block class with his 465cu in Pontiac. Fitted with Kaufman heads, it generated 637hp (peak) and 559lb ft torque.

Now that the EMC is over for another year, the contestants will be deciding what to do with their 2015 entries. They will also cast their minds back to the drama and the stressful moments of the event. Then they will reconcile their emotions in its aftermath with thoughts of the fun they had. That’s what competition does! Roll on 2016