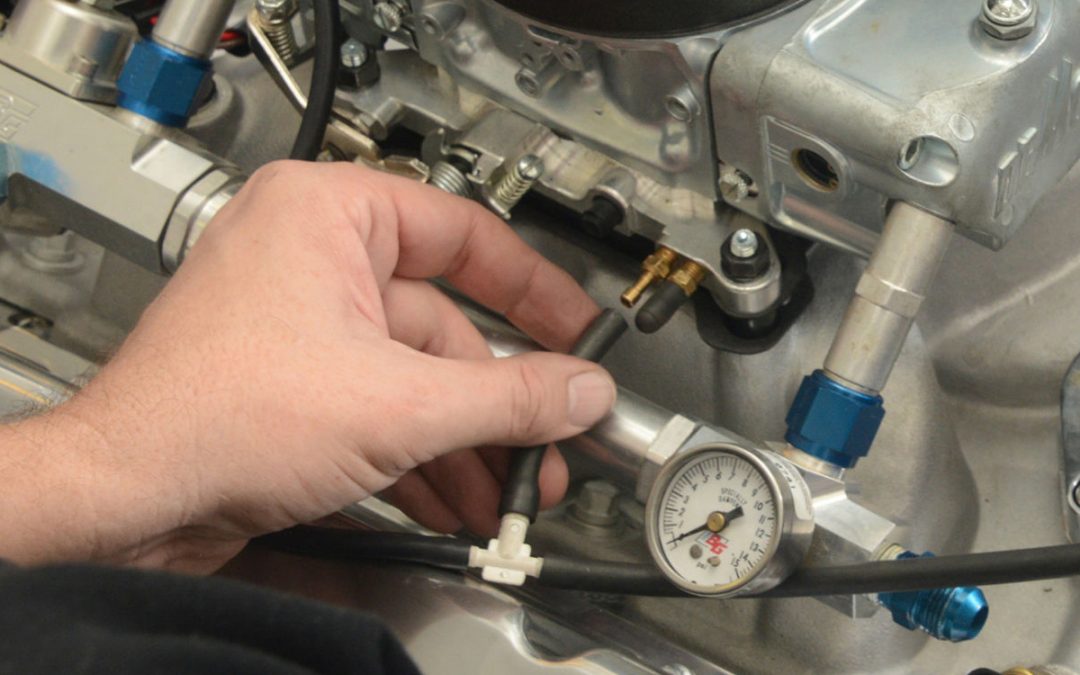 Conventional carburetors operate at prevailing barometric pressures, from oxygen-rich sea level to oxygen-lean Denver, a mile high in Colorado. Blow-through carburetors, which work in conjunction with centrifugal superchargers and turbochargers, operate with boosted pressure. It’s a contrasting concept that accelerates the induction process. It impels higher velocity fuel flow through the main jets and robustly emulsifies the air-fuel mixture in the metering passageways, as it makes its way to the carburetor’s boost venturii.

The boost venturii are carefully positioned in a choked area, an area with a reduced cross-section to increase the air speed. Increased air speed lowers the air pressure at the small discharge orifice in the booster, extracting the air-fuel mixture into the air stream on its journey to the cylinders.

When boost pressure enters the fuel bowls, via the two vent tubes, its force lowers the fuel levels and quickly becomes so potent with increasing engine speed that the needle-and-seat valves cannot keep pace with demand.

When the engine is stopped, spring pressure holds the ball against its seat. When the engine is started, the pressure generated by the electric pump pushes upward on the diaphragm, compressing the spring slightly, and moving the ball above its seat. As the pressure decreases, the spring closes the valve. Most of the fuel pumped at idle returns to the tank. Fuel pumps are usually designed to generate sufficient fuel pressure and flow at full throttle plus an additional 15 percent.

The typical pressure ratio is approximately 1:1; that is, for every one pound of boost pressure applied to the atmospheric side of the diaphragm, a corresponding one pound of fuel pressure is added by the fuel pump. The behavior of the needle-and-seat valve, however, remains unaltered because its closing pressure is determined by the buoyancy of the float.

Blow-through carburetors might be anathema to the many that follow latest induction technology. Though modern fuel injection systems don’t generate more power at full throttle, they would be more efficient than the blow-through particularly when starting and also smoother at low speeds. But for those who admire the ingenious innovations of a bygone age, it is often the blow-through operating in tandem with the delights of a supercharger that capture the desires of discerning devotees.

The carburetor creates the air-fuel mixture that promotes combustion, and it functions by pressure differential. The boost venturii accelerate the flow by creating a low pressure area. As pressure at the boost venturii is lower than in the float bowls, fuel is compelled to flow from the bowls, through the metering circuits (becoming an air-fuel emulsion), and out the boost venturii into the fast-moving induction tract. But it’s engine vacuum that activates the kinetics of depression–as the pistons descend in their bores and with their respective intake valves open, the giant sucking sound is created. (Excuse dubious analogy of the late Ross Perot’s once popular political phrase.)

Competition carburetor specialists equipped with a sophisticated flow bench can measure the pressure difference with an manometer. Known as ‘measuring the signal’, the goal is to achieve the highest signal-to-flow ratio, and they pay particular attention to the symmetry of all four boost venturii and their placement within the main venturii. Poor booster alignment, for example, has an adverse effect on the carburetor’s performance. Higher or lower signal is corrected by normal carburetor tuning, jets, or air bleeds. However, a carburetor with a poor signal-to-flow ratio cannot not perform as efficiently as one with an optimum signal.

The anatomy of the blow-through carburetor

The specifications of the blow-through carburetor are very different to those of their naturally aspirated counterparts. The blow-through devices usually feature larger jets, smaller air bleeds, enriched metering circuits, enlarged boost venturii passageways, and large diameter needle-and-seat valves (substituting 0.130in for 0.110in) with dual inlet ports on the carburetor bowls. Also, the throttle shafts are sealed and the traditional brass floats are too delicate for boost use and are replaced by the Nitrophyl kind that comprises closed-cell foam.

How the needle-and-seat valve operates in boosted fuel bowls.

The blow-through carburetor’s needle-and-seat valves function like the common toilet cistern valve, opening and closing, especially at idle, just as they would in a naturally aspirated environment. But as boost pressure increases at full throttle openings, the float bowls become fully flowing reservoirs with their needle valves entirely open in an effort to maintain proper fuel levels. They are attempting to provide constant, calibrated fuel flow to the engine. Obviously, it’s essential to avoid low fuel levels that would cause the boost venturii to deliver harmfully lean air-fuel mixtures.

The initial dry setting is accomplished by removing the fuel bowl and, with it turned upside-down, the dimension between the inside top surface of the bowl and the top of the float is set at approximately 0.375in to 0.0400in

With the engine running at normal operating temperature, the fuel level should reside in the middle of the glass window of the fuel bowl. If it is low, loosen the lock screw on top of the bowl and adjust the nut counter-clockwise to raise the float level. Make the adjustment by one flat of the nut at a time and wait for the carburetor to respond.

Adjusted properly and with correct specifications, blow-through carburetors can provide instantaneous velocity through the venturii, as the engine accelerates from a vacuum condition to supercharge boost. If it does have a shortcoming, it often lies not in the carburetor’s anatomy but in the bonnet attached to it. Pressurizing air and steering it around a ninety-degree elbow at high speed and encouraging it to occupy the entire 360-degree circumference can be a tricky business. As the late Kenny Augustine once said, “You can make air go fast, and you can make it go around corners. But you can’t do both.”

The chief purpose of the vent tubes is to maintain equal pressure both outside and inside the bowl, and a poorly designed carburetor bonnet under boost conditions can, bizarrely, cause a depression on the bowl, drawing fuel out through the vent tube! The carburetor’s greatest depression at idle should be under the throttle plates, where the engine’s vacuum draws on the idle ports and transfer slots. The carburetor’s greatest depression at full throttle should be at the boost venturii. Experimenting with several different kinds of bonnets can be useful.

To read trouble-shooting comments about Blow-through carburetors, read the story below: