As it turned out, their reckonings were probably close to the mark: some coach journeys from hotels just three miles distance from the Convention Center took between an hour and one and one-half hours. At 8:30 on Wednesday morning attendees catching the Monorail at the MGM station arrived at the exhibition at 10:45! The crush in Vegas was something most won’t miss.

By necessity, though, SEMA tries to attract the maximum number of qualified attendees. But exhibitors are caught wondering where the wholesalers have gone. Ironically, this was the irritation hardcore exhibitors voiced a decade ago to the Performance Racing Industry.

To attract ever greater numbers of attendees and exhibitors, PRI management moved their show from Indianapolis to a larger facility in Orlando. Unfortunately, the move attracted new attendees and exhibitors far from the hardcore variety, and the former soon tired of the latter. Attracting throngs of tire-kickers and facilitating displayers of toy helicopters and every other distraction imaginable had been the final straw.

To the exhibitor’s consternation, the show had exceeded its parameter and another hardcore exhibition was established at Indy to replace the defector. Years passed before common sense prevailed, and in the meantime the exhibitors paid the price. These circumstances evoked the old saying: The only lesson we learn from history is we never learn from history!

As for SEMA, it’s hard to distinguish between trade members and the general public. However, a decade ago queues for women’s restrooms didn’t exist. Not so today. Moreover, on the last day, Friday, the doors are thrown open for admission to the general public. Most insiders suspect that 80 percent of the hardcore-performance exhibitors have abandoned SEMA, which might be as it should as the forthcoming PRI exhibition, now back in Indianapolis, is dedicated to them.

So what do we have? We have a custom car, wheel and tire, and accessories show which is unparalleled. Like the city that hosts it, exhibits are often odd and sometimes bizarre. This year Honda unveiled a one-liter 109hp lawn mower. Producing 130 ear-splitting decibels and with an estimated speed of 133mph, the contraption accelerates from zero to 60 in four seconds. For those possessed with the power of reason, they could be forgiven for asking why. Still, the SEMA extravaganza attracted 2,500 exhibition booths and good-humored record-breaking crowds. Let’s hope it generated business.

Glancing at the daily papers during the long coach rides to the Convention Center, we learned of the growing debacle surrounding our affordable health care program and that each year around 5,000 of us are dying from the consumption of artificial trans fats in our diet. Another 15,000 are afflicted with heart disease from the same insidious, partially hydrogenated oil. In addition, insurance records have revealed that 18 percent of our 18 to 30 year olds, who have convinced themselves they are healthy and therefore reluctant to sign up for health insurance, have been diagnosed with costly mental health conditions—depression, obesity, substance abuse, et-al. And that was the SEMA week that was! 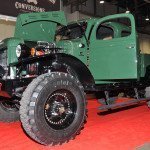