Birmingham, England: Fancy embarking on a great adventure? To occupy your mind in the grip of winter, you might consider the Autosport International show. It began in 1991 as the Racing Car show and has just celebrated its 25th anniversary this January.

A pioneering concept originally, it revealed an era of optimism and energy, opening up an alluring world of racing cars old and new. It’s a venue where technology and industry and science and racing people flourish.

Always based at the National Exhibition Center in Birmingham, the inaugural event attracted just 150 exhibitors and 30,000 visitors. Last year, by comparison, the four-day show enticed 600 exhibitors and 82,000 visitors. Presenting an enchanting mix of modern and classic exhibits, it’s the nostalgia flavor, apparently, that’s often the main draw. Like our own PRI event held annually in Indianapolis, the UK exhibition serves as the traditional precursor to every race season. Both the RXC, Radical’s striking gull-wing coupe, and their latest Spyder, above, are already campaigning impressively in the States

Company head Phil Abbott said, “The reaction to the Spyder quite surprised me—this was probably the best show we have ever attended in terms of sales. The SR3 is also selling well and the RXC, our gull-wing coupe, has just been homologated.”

Radical race cars arrived in the US at the turn of the century. Always elegant and fast, they quickly established six lap records in the SCCA 1-liter D-Sport division between 2000 and 2002, won the prestigious June Sprints as well as two successive Southeastern National championships. Today, Radical North America thrives through a nationwide network of dealers.

To find out more click on the link below it’s worth a look! 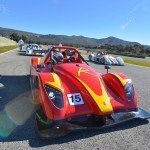 Fancy a quick lap of the Silverstone GP circuit?