“All our friends are dead”: Weekend of a champion 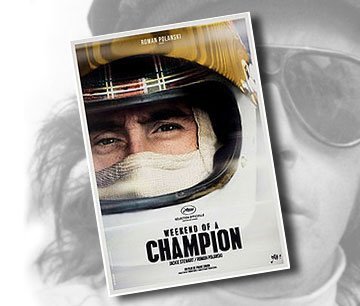 Set in May of 1971 in Monte Carlo, an area of the Mediterranean Principality of Monaco, Weekend of a Champion is a documentary that portrays how three-time F1 world champion Jackie Stewart applies himself to the task.

Produced by Roman Polanski and directed by Frank Simon, the film premiered at the 1972 Berlin Film Festival and subsequently remained unscreened for 40 years. Now re-released and available on Netflix, it is the finest documentary on F1 for car racing enthusiasts of that period.

Though it was a trendy time particularly for the racers—hair styles, side burns, beautiful cars and voluptuous girlfriends with Riviera suntans—F1 was a sport that inflicted profound loss and grief.

In common with US sprint car racing of the last century, Formula One spawned an appalling death rate. When Stewart sat down with his wife, Helen, they calculated that 57 professional racing drivers had perished during his final five years of racing from 1968 to ’73. Marked by destruction, two of every three drivers were fated with violent death. They knew the slightest error would betray them—no wonder she had said: “all our close friends are dead.” After his retirement at the end of the 1973 season, Stewart, now 76, became an F1 champion of safety, implementing an often contentious campaign that rid F1 of deaths for 18 or 19 successive years.

For enthusiasts, though, the essence of an enjoyable documentary is one that allows you to marvel at the details as they unfold. And on this particular weekend, Stewart was extremely fortunate in that the rain held off, for the team had lost their way in finding a wet set-up, causing Stewart to declare: “If it rains, we are in no shape to compete.”

Jackie Stewart, like his iconic predecessors Jimmy Clark, Stirling Moss, and Fangio, was the best driver of his era. He won his first F1 championship in 1969 in a Ford Cosworth-powered Matra and repeated the feat in 1971 and again in 1973. Winning a record 27 Grands Prix, smoothness combined with intelligence were the cornerstones of the canny Scot’s career.

Juan Pablo Montoya tells a story about coming to England at the beginning of his career in the mid-1990s and racing in the Stewart Formula Vauxhall team. “I was struggling ,” said Juan, “when Jackie asked me to take him around Oulton Park in a Cosworth-powered Ford Escort. He remarked, ‘You don’t need to try that hard.’ Then he took the wheel. He seemed slow through the gears, really smooth on the brakes and used very little steering effort. When we returned to the pits I discovered he was seven-tenths quicker than my best lap time. That taught me a lesson. I was using too much energy and effort, I was wasting time by trying too hard. After that I won three of my last six Formula Vauxhall races, and ended the season third in the championship.”

In Weekend of a Champion, you’ll hear the 5ft 4in title holder discussing the importance of gear ratio selection and its relevance to full and half-full fuel tanks—especially its effect during the final stages of a race, exact braking and gear change points, the threat of the tall square-sided curbs, the brake balance, the checking of rear tire profiles in his high-set mirrors—in all these areas he excelled. His deftness and pace around Monte Carlo was always something to see.

Though unknown at the time Stewart suffered from dyslexia—a brain disorder that impairs the ability to read and write. When he left school at 15 he was convinced he was stupid and remained unaware of the disorder’s existence until he was 42. In conclusion, this documentary not only reveals significant technically interesting information and presents the viewer with a great sense of occasion but also it is startling that Stewart was so forthcoming. As Niki Lauda once implied, championships are often won on the details: if you can penetrate and adopt all those little advantages you can clinch a title!